← Some Thoughts on Anthropological Research Language Policy in Kyrgyzstan →

A few days ago, I paid a visit to a site that has captured my curiosity since my first day in Bishkek: the capital city’s New Central Mosque. From a distance, the mosque’s white minarets rise gracefully above an otherwise drab urban skyline. Upon closer inspection, however, the building reveals itself to be an incomplete concrete hull.

When plans for the mosque emerged in 2009, it was touted as the largest mosque in Central Asia. Five years on, however, and the complex, beset by myriad delays, remains a work-in-progress. Weeds and thick brush have begun to encroach on the incomplete concrete structure, and detritus litters the construction site. Meanwhile, the Hazrat Sultan Mosque in Astana – constructed in just three years – has claimed the title of Central Asia’s largest mosque. 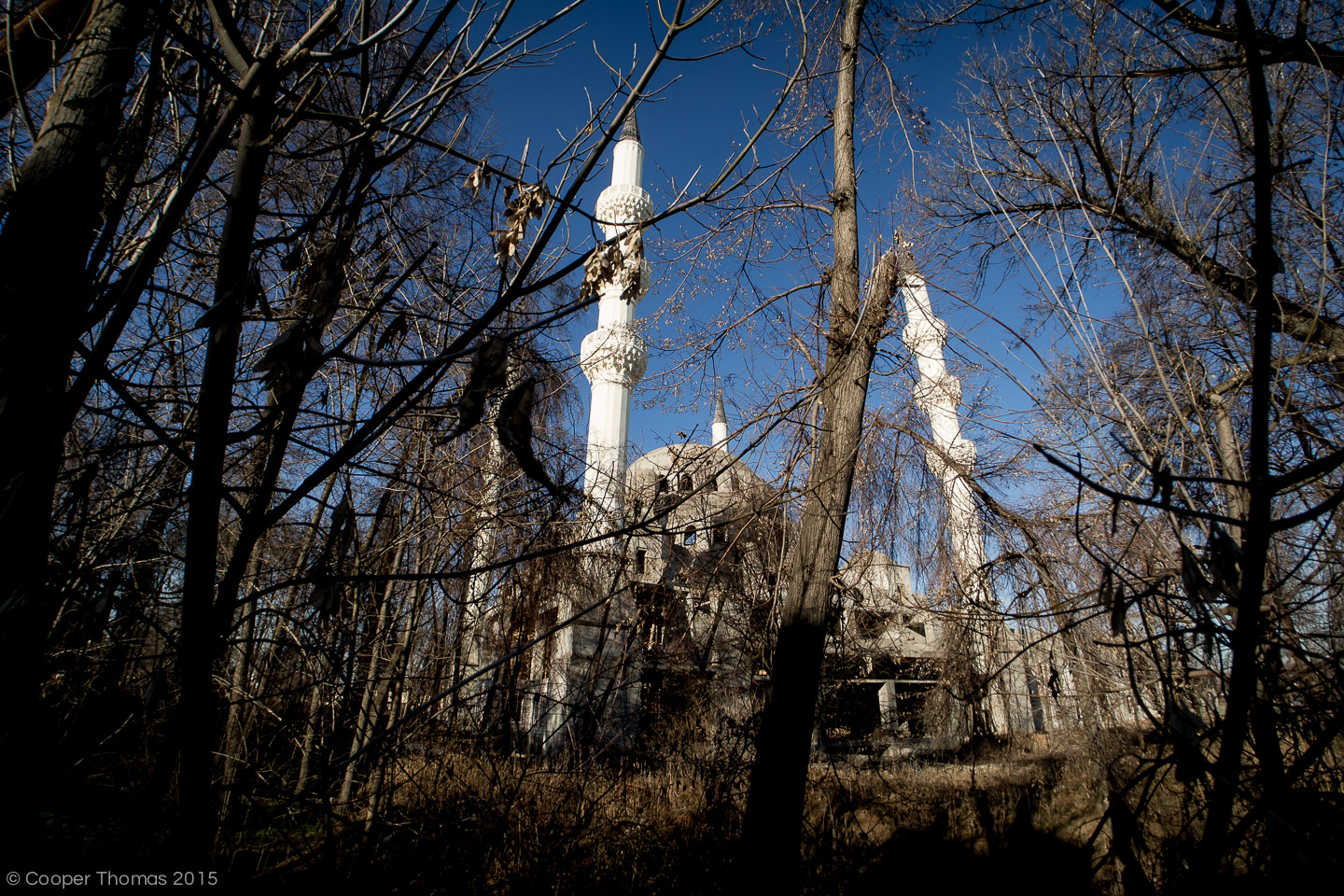 Although Islam is the most common religion in Kyrgyzstan – at least 85 percent of the population practice the religion – the local strain of Islam has historically drawn influence from traditional shamanistic and animistic beliefs and practices. However, the post-Soviet era has witnessed a marked shift toward more orthodox forms of the religion, as private Islamic funds in the Middle East have invested heavily in local religious infrastructure and provided imams and muftis to preside over new institutions, concomitantly supplanting traditional forms of worship. Construction delays notwithstanding, the New Central Mosque is definitely emblematic of Islam’s renaissance in the region. While initial construction cost estimates hovered around $14 million, this figure is projected to exceed $20 million by the time the mosque opens. Incidentally, the project is funded almost exclusively by Turkish and Jordanian donors.

Some scholars speculate that the construction of new mosques and medrassahs is not a response to the population’s naturally increasing devotion, but rather, a cause of increasing devotion – in other words, a case of supply-side economics. Others, such as my research supervisor Emil Nasritdinov, assert that the religion’s resurgence is an internally driven response to economic, political, and cultural changes in the post-Soviet era; in one article, he writes, “in the context of growing social stratification, so unacceptable to the Soviet mentality, Islamic emphasis on equality, brotherhood and mutual support helps people through the period of transition.” Whatever the case, the populace’s renewed interest in religion can be observed throughout the country; in fact, Bishkek is one of the more secular cities in Kyrgyzstan. Whereas in 1991 there were only 36 mosques in Kyrgyzstan, today, there are over 2,100, with more sprouting up each month.

I’ll end this post with an interesting fact: Istanbul’s Sultan Ahmed (Blue) Mosque, from which Bishkek’s mosque draws inspiration, was built between 1609 and 1616. The New Central Mosque was introduced in 2009, and is expected to reach completion in 2016. Exactly four hundred years separate two mosques’ (anticipated) construction timelines. Conspiracists, get to work!