← Buildings That I Love, Part One: Bishkek Wedding Palace Bishkek in Film: the Sequel →

Last Saturday, March 21, marked the first day of spring – and in the Persian calendar, it also marked the first day of the solar year 1394. The spring equinox, known in Farsi as Nowruz (lit., “New Day”), is celebrated extravagantly throughout Central Asia. In Kyrgyzstan, where Nowruz is a national holiday, municipal governments organize city-wide events, including traditional music and dance performances, public feasts, and uninspired speeches. The federal government also organizes horse game competitions, including short- and long-distances races, horseback wrestling, and the crowd favorite, ulak tartysh: a decidedly Central Asian variant of polo that uses a headless goat carcass in lieu of a ball.

On Saturday morning, a couple friends and I headed to the Bishkek hippodrome – the city’s premier racecourse-cum-potato-field – in the hopes of catching the championship ulak tartysh match between the teams of Talas and Sary-Ozon. We arrived at the hippodrome at around 11am, but the grandstand was already packed to the brim, and the game was underway. Undeterred, I followed the lead of some local Kyrgyz guys and clambered onto a ten-foot concrete wall separating the racetrack from the street. 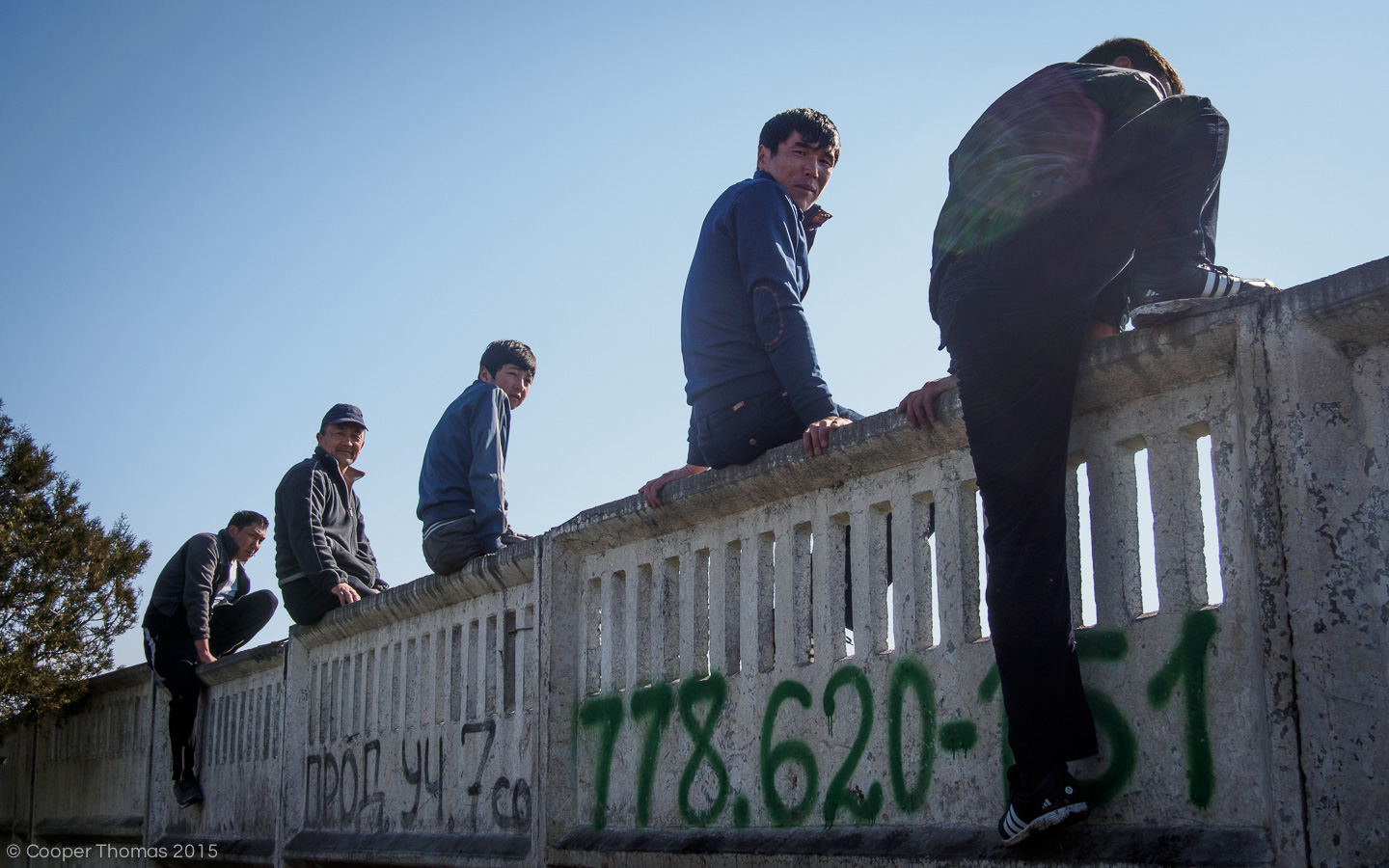 Spectators enjoy the ulak tartysh match from atop the hippodrome barrier

As I sat astride the barrier, snapping a few photos, a cop on horseback spotted me and trotted over. “Фотографировать нельзя!” (“photography is forbidden!”), he shouted at me, simultaneously wagging a finger in disapproval and ashing his cigarette on the ground. Surprised, I blurted out, “Я журналист!” – “I’m a journalist!” He grinned broadly, invited me to take a photo of him, and entreated me to hop down onto the racetrack. I gestured back toward my friends, and told him that they were waiting for me, but he urged me on. Glancing over my shoulder, I saw that friends were already out of sight down the road, so I jumped down from the barrier and scampered toward the center of the track, where the ulak tartysh match was in full swing. 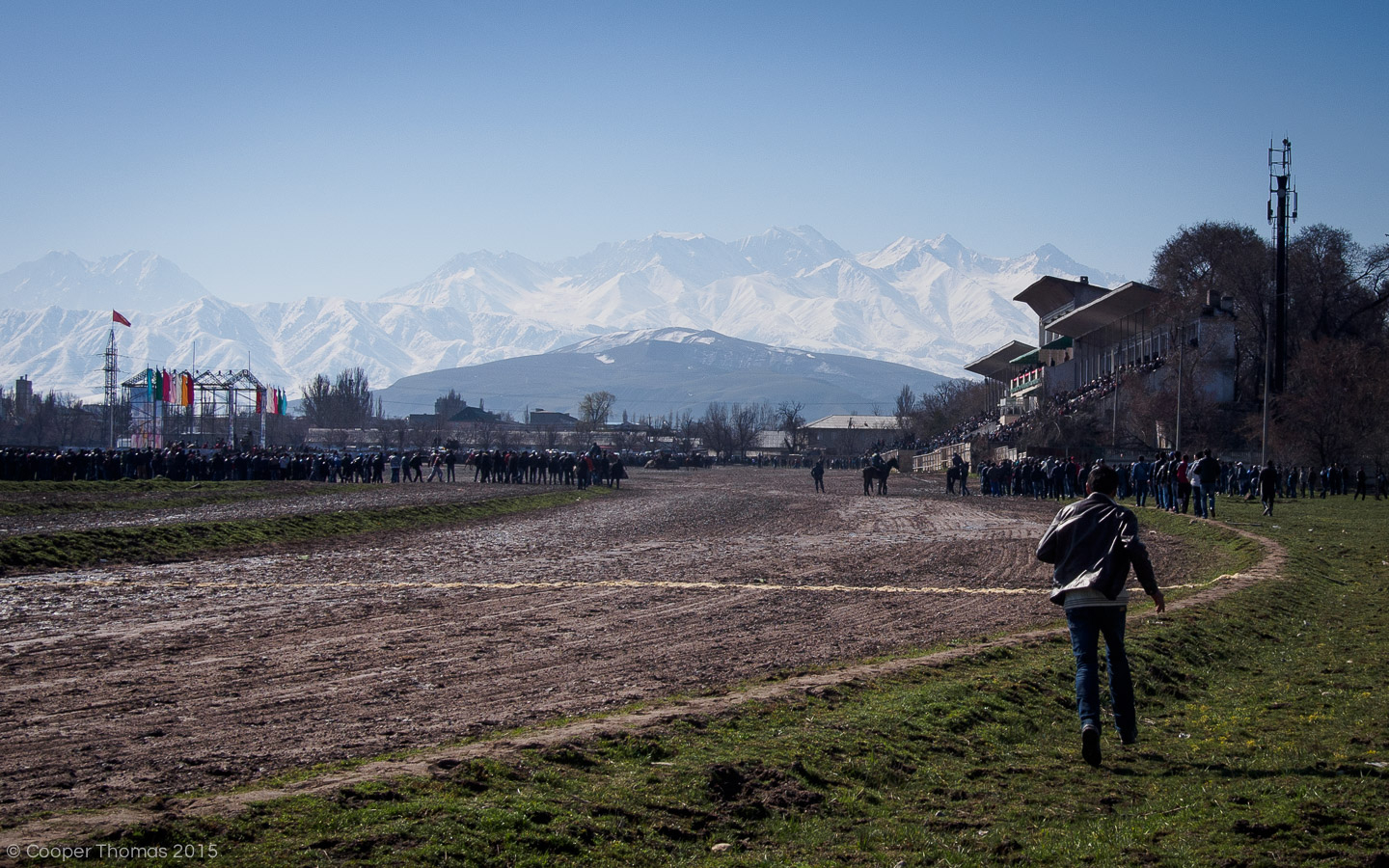 An ulak tartysh enthusiast sprints toward the track

Now, I won’t try to explain the rules of this game in detail, as I hardly understand them myself. Nevertheless, here’s the gist of it: the game is played on a muddy pitch roughly 100 meters long and 60 meters wide, though there are no fixed boundaries – the rowdy crowd fulfills this purpose, joining together to form a tight perimeter. (It’s sort of like a rap battle, only with a giant arena, several horses, and a goat carcass.) At each end of the pitch lies a raised mound, the center of which has been hollowed out and filled with water. The two teams, each comprised of five men on horseback – or maybe it was six or seven, I’m not really sure – attempt to hurl the headless goat/sheep/calf carcass into the opposition’s mound by any means necessary. 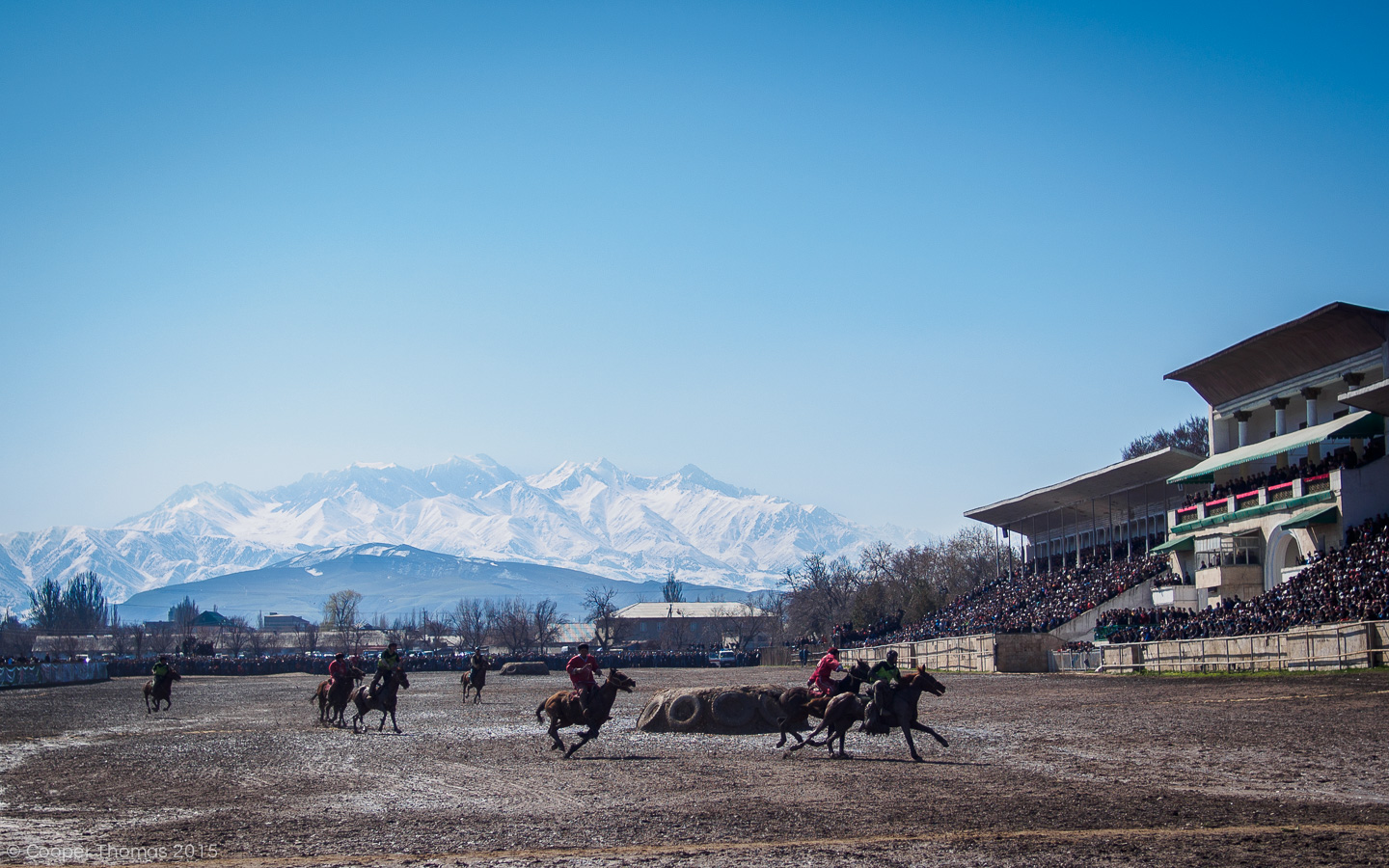 Riders thunder across the pitch

The carcass weighs 40–60 kilos, and so it’s not really feasible for teammates to transfer the “ball” amongst themselves; instead, those riders not carrying the carcass simply ram their horses into their opponents, in order to deter them from snatching the carcass away. The whole thing is quite brutal: riders are frequently forcibly dismounted, and in some instances, nearly trampled by their own steeds. Occasionally, the horses the waywardly into the crowd, sending men scrambling through the mud to safety. Humorous from a distance, but terrifying up close. 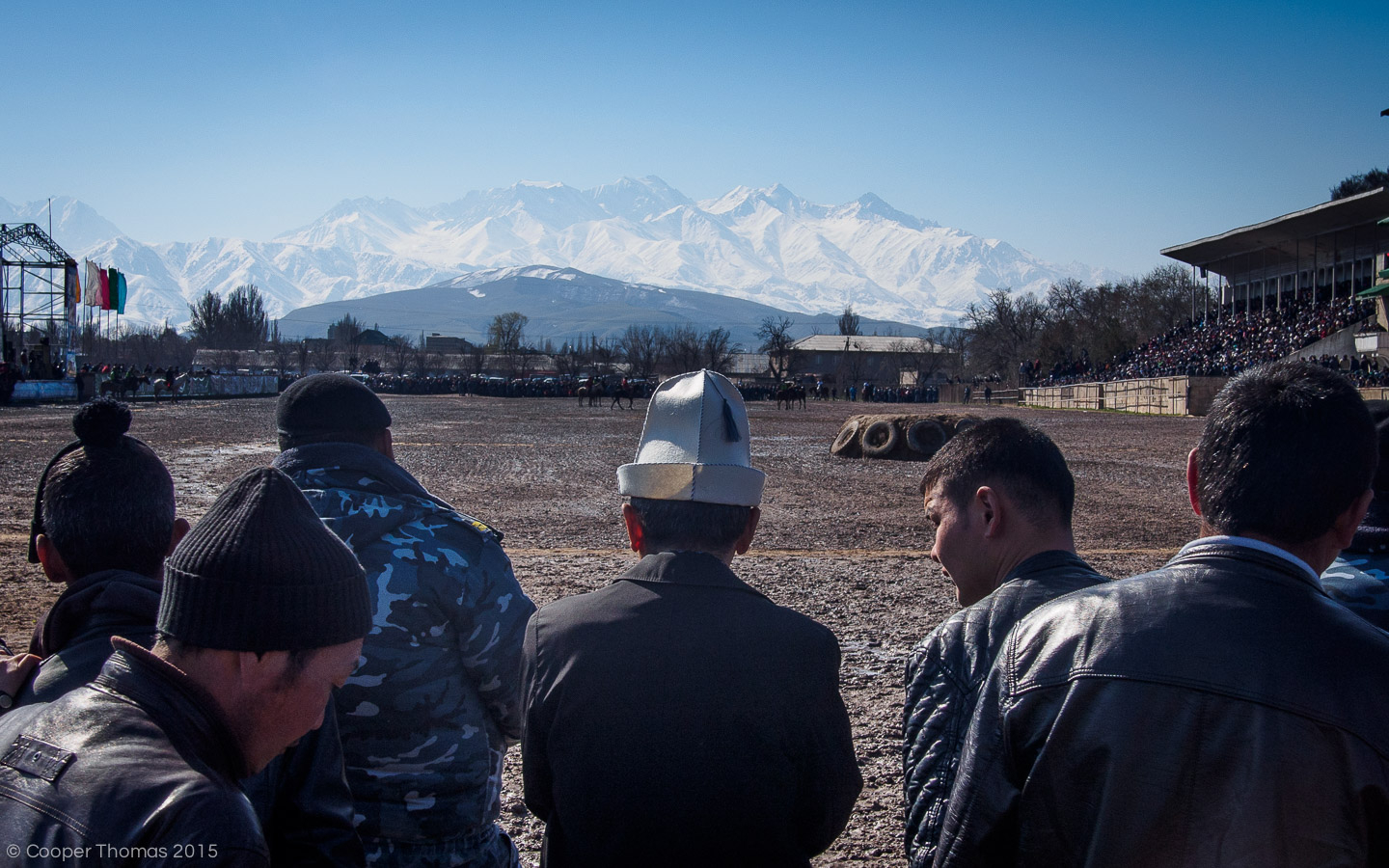 Anyway, the match ended in a draw, triggering a dramatic penalty shootout that was vaguely reminiscent of the face-offs in slamball: one by one, each rider attempted to traverse the length of the pitch at top speed, reins in one had and carcass in the other, and fling the the carcass in his opponent’s mound, while a single opponent pursued him. The athlete bearing the carcass enjoyed a decent headstart, but several times, the pursuer successfully dismounted his opponent before he reached the mound, or otherwise blocked/intercepted his shot. The whole thing was quite violent and bizarre, but unquestionably entertaining. With every hit, the crowd cheered elatedly. I cringed as one particularly daring rider drove his horse headlong into the mound, sending them both flipping through the air and crashing down into the mud beyond. 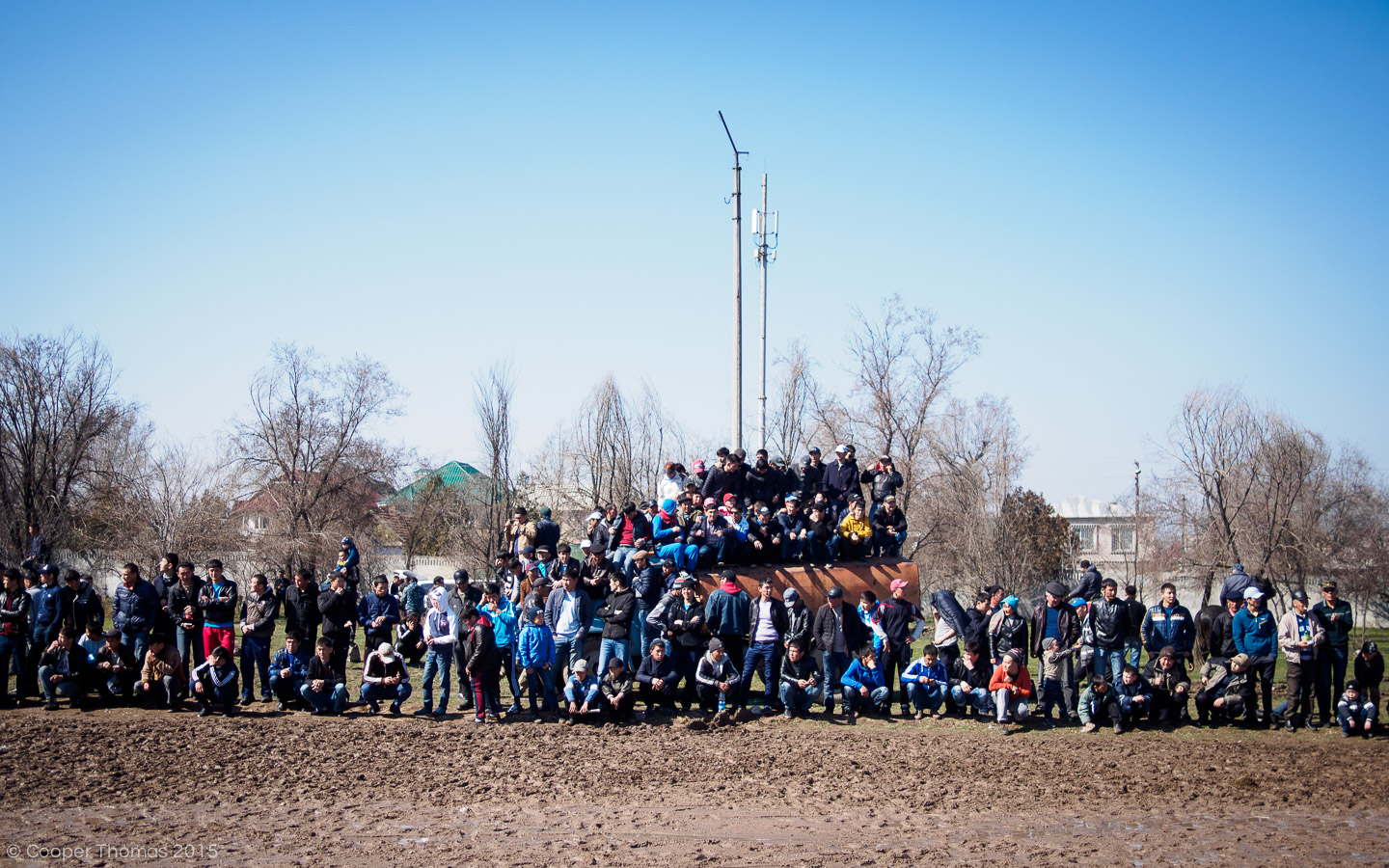 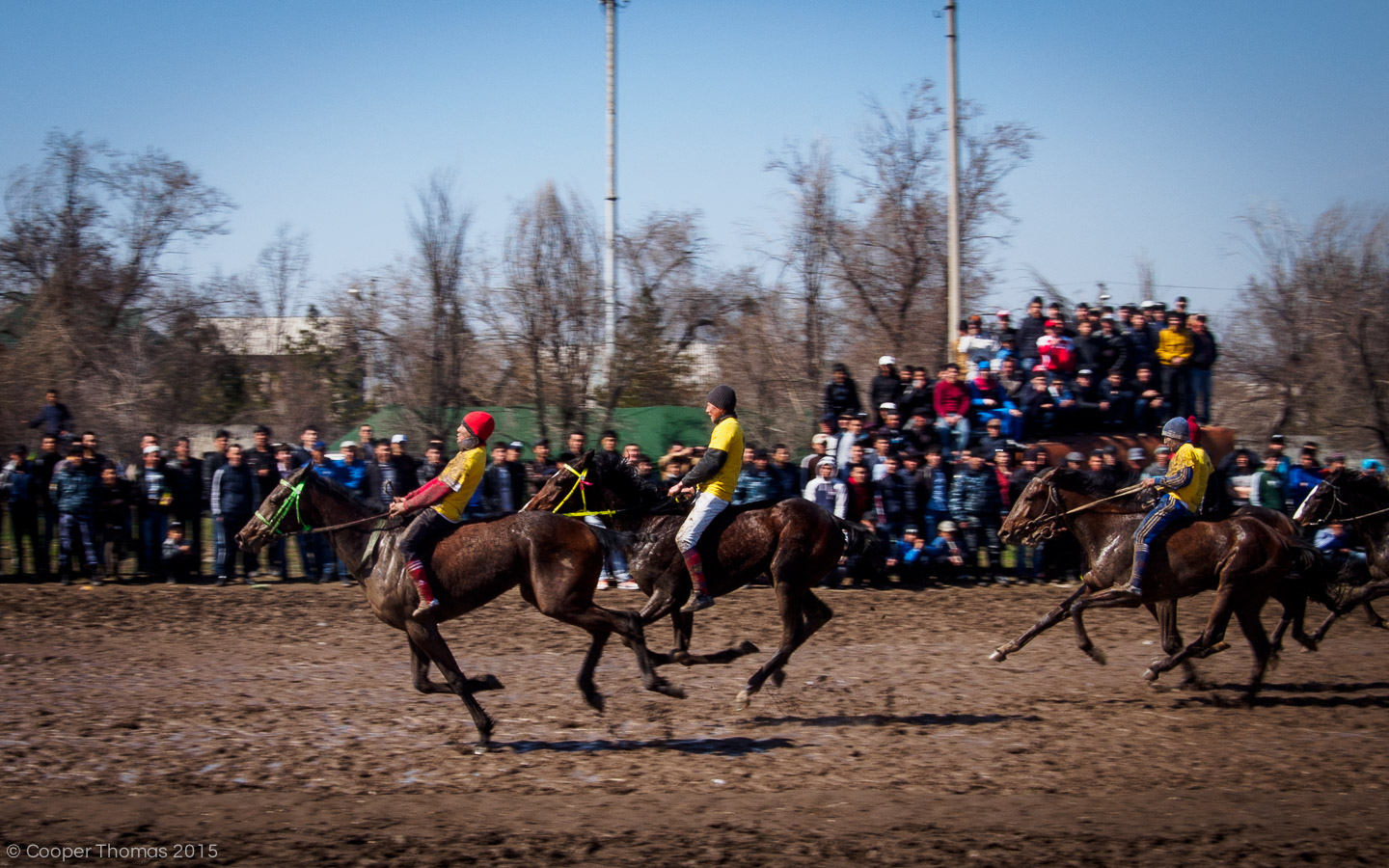 Around this time, I started chatting with a couple young local guys. They were totally smashed, and told me that this holiday offered a great excuse to start drinking at 9am. Looking around, I noticed that almost all of the spectators were male, and more than a couple wobbled around drunkenly. Most wore the official uniform of Kyrgyzstan – a knockoff Adidas tracksuit, a baseball cap, and pointed leather shoes – while a few older gents sported ill-fitting business suits and kalpaks. My new friends told me that most of the women attended the performances in Ala-Too Square, as these were “men’s games.” Dozens of uniformed policemen loitered around the stadium, but most officers seemed more interested in watching the events than corraling the crowd. 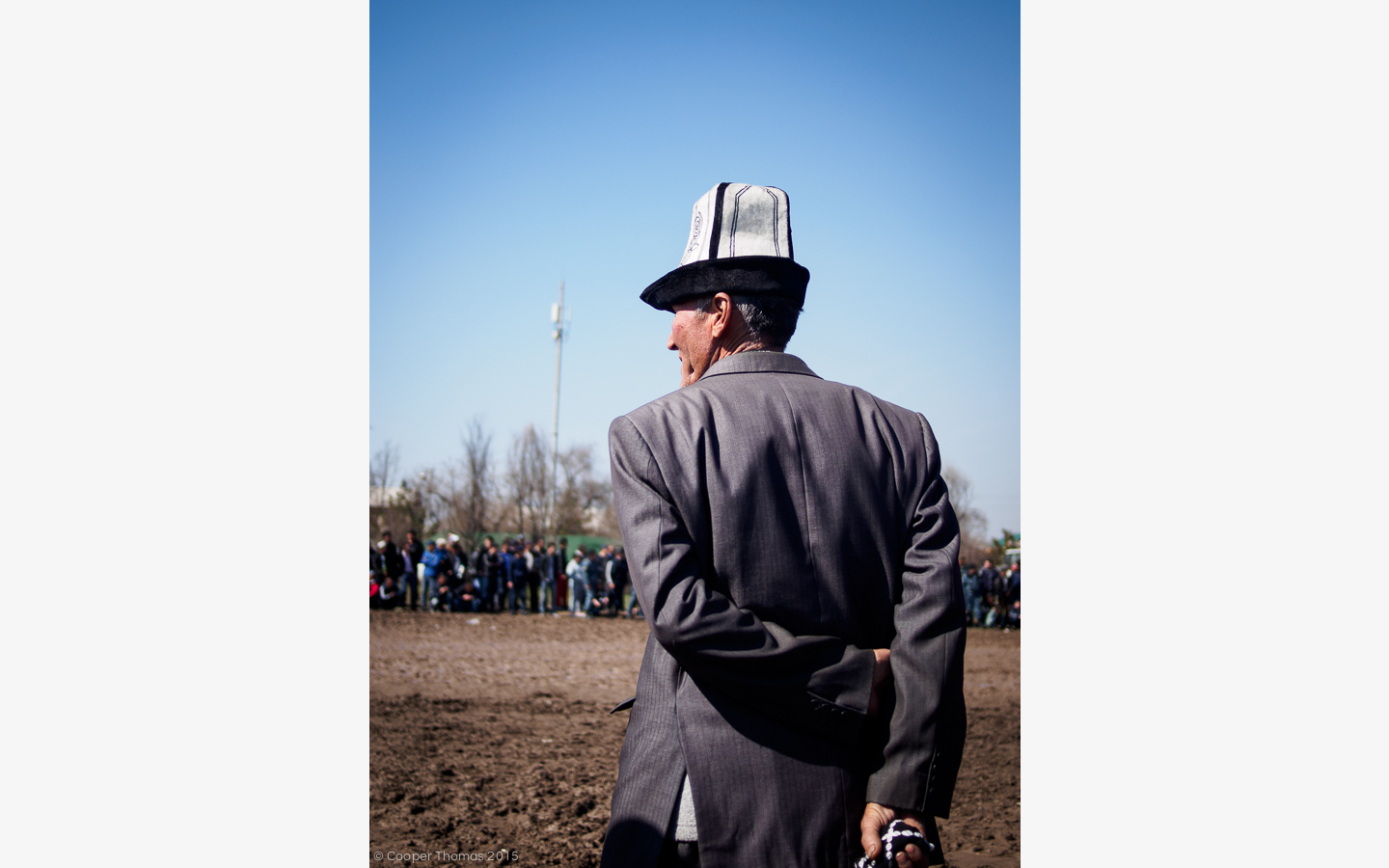 By this time, my friends (the ones I came with, not the Kyrgyz guys) had found me. After a while, we began to grow hungry, so we meandered toward the exit, pausing briefly to watch a horseback wrestling match or two. Once outside the hippodrome, we enjoyed a juicy turkey shashlyk before hopping in a cab and heading back toward the city center. I’d hoped to catch some of the performances in Ala-Too Square, but I had a prior engagement, so I headed back to my apartment, bemusedly wondering if, in another life, I could make it as an ulak tartysh star. 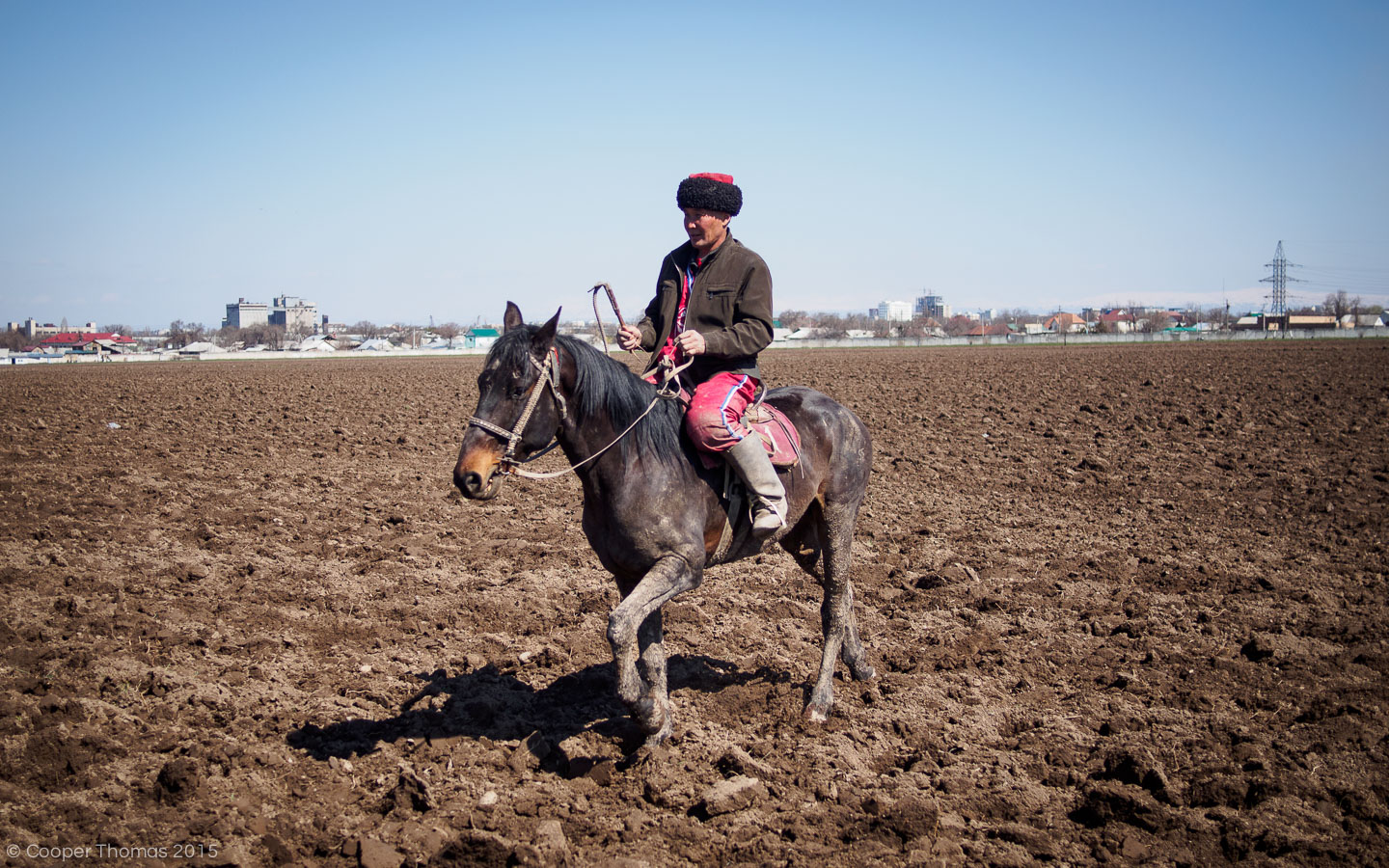