Commerce and Community: A Closer Look at the Osh Bazaar

← Another Foray into the Mountains Escaping the City →

Occupying a vast swath of land just north of downtown Bishkek, the Dordoy Bazaar is the largest public market in Central Asia, and one of the largest markets in the world. This labyrinthine network of double-stacked shipping containers – the top ones used as stockrooms, the bottom ones as storefronts – attracts some 20,000 consumers every weekend, and employs an equal number of people as vendors, porters, and security guards. And that’s a conservative estimate: Dordoy trade union leader Damira Dootalieva puts this figure at 60,000. It is, both statistically and symbolically, the backbone of Kyrgyz commerce. 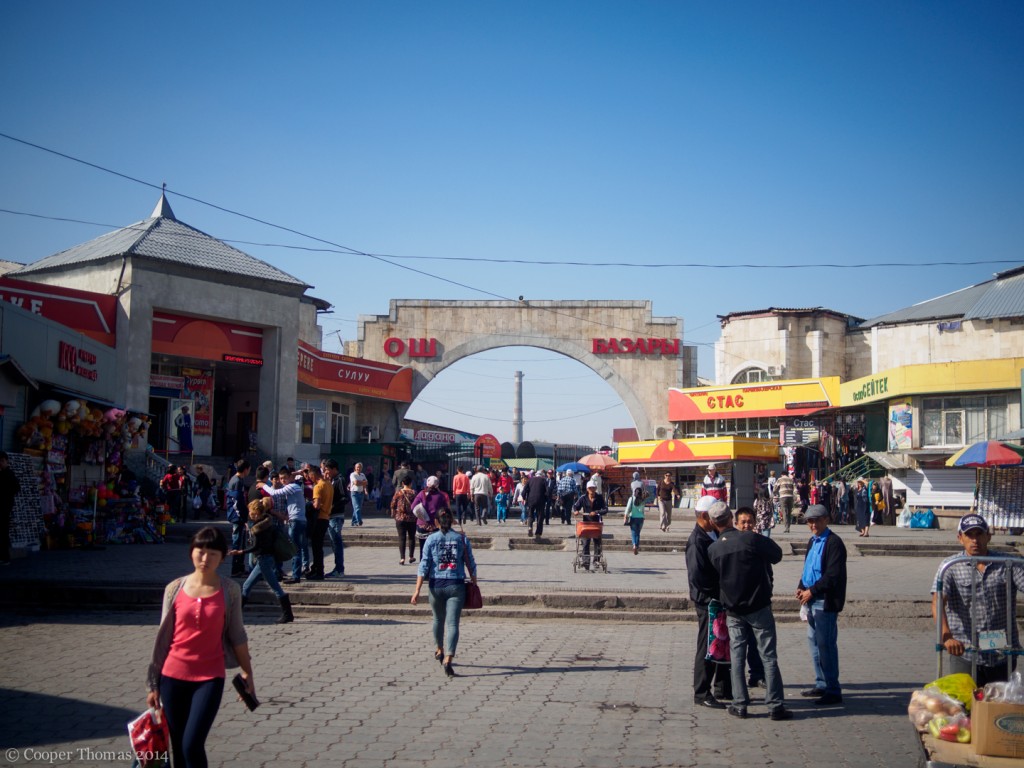 However, it is the Dordoy Bazaar’s smaller cousin to the southwest – the Osh Bazaar (above) – that has captured my fascination. (Note: the Osh Bazaar in Bishkek is not to be confused with the main bazaar in the city of Osh, located in the south of the country near the border with Uzbekistan.) Although both markets opened in the aftermath of the Soviet Union’s collapse and Kyrgyzstan’s reluctant emergence as a sovereign nation, they serve slightly different purposes: while the Dordoy Bazaar is Bishkek’s de facto shopping center – the place to go for consumer goods such as electronics, clothing, and cleaning supplies – the Osh Bazaar is its grocer. Here, one can purchase fresh fruit, vegetables, meat, and other essential foodstuffs from around the region and beyond. 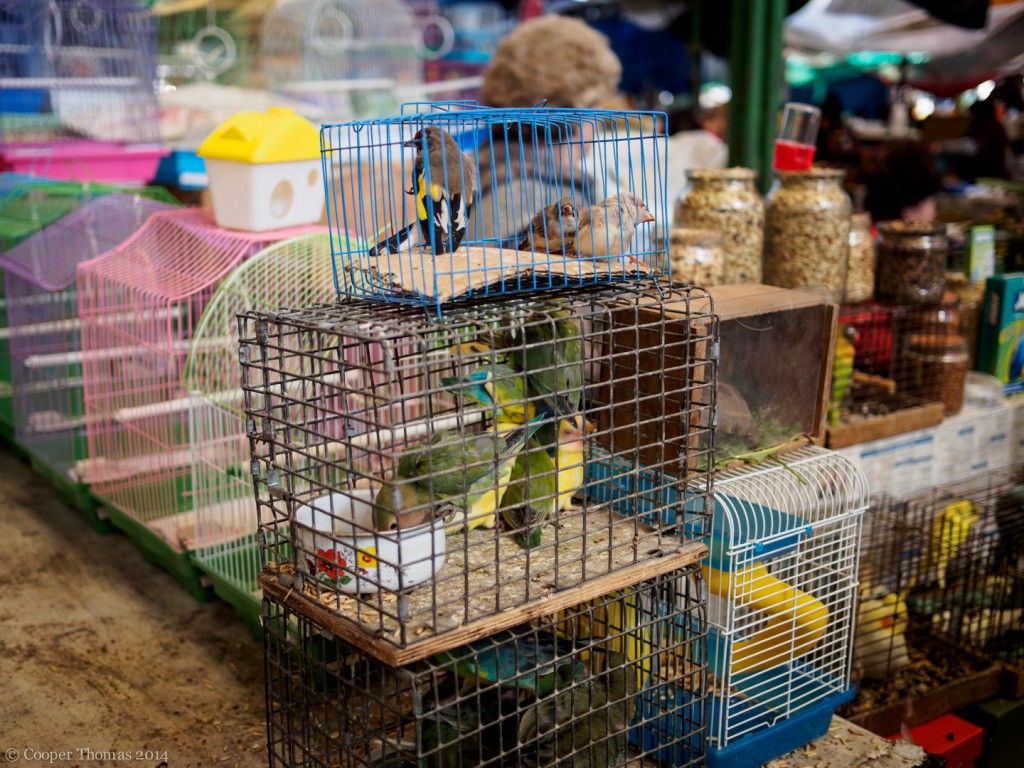 Now, some visitors might dismiss the Osh Bazaar as a hot, crowded, noisy, smelly, chaotic maze – and in all fairness, this characterization is quite accurate. But the Osh Bazaar is also an agora of sorts; a place where Kyrgyz citizens of all ethnicities and socio-economic strata routinely congregate and interact with one another with relative civility. It’s a place where divisive and often inflammatory differences are temporarily suspended in the interest of commerce. And in a country plagued by interethnic and intertribal conflict – both in government and on the streets – such tolerant spaces are few and far between. Here, you’ll find Kyrgyz selling grains, Uzbeks selling melons, Koreans selling kimchi, Dungans selling spices, Russians selling colorful songbirds (presumably as pets, though I’m not entirely sure), and Lyuli (Roma) selling blessings, all within a couple hundred feet of each other – and of course, people of all ethnicities and walks of life buying these goods. The Osh Bazaar is as diverse as the Kyrgyz populace itself. 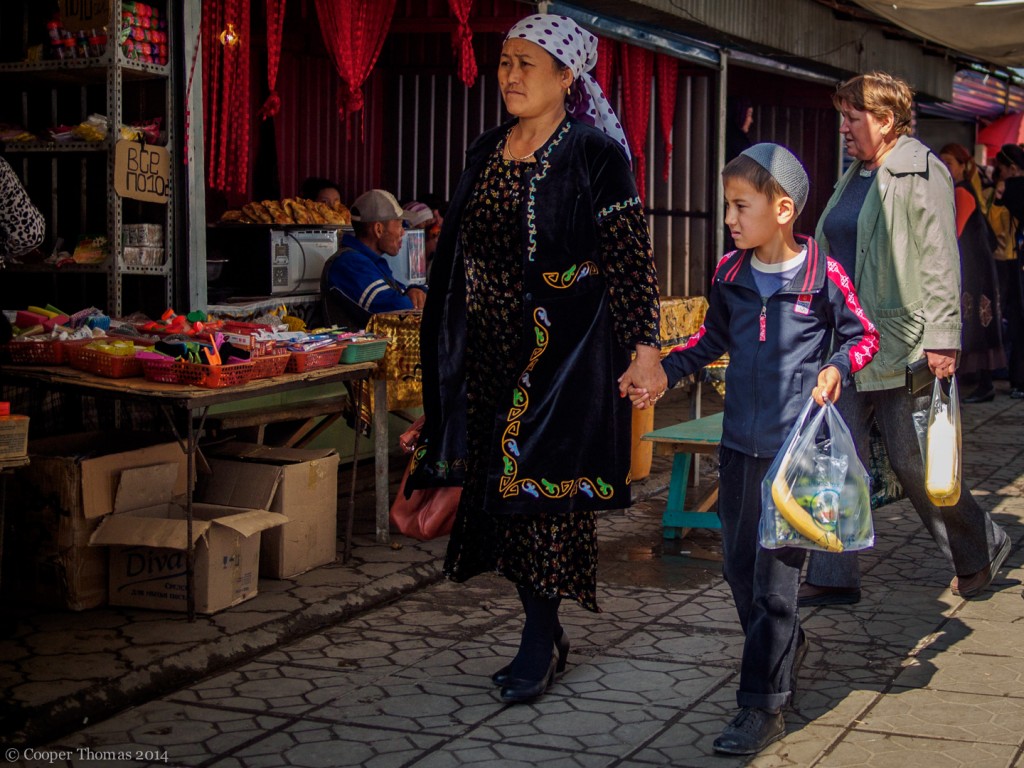 I typically struggle to wake up before 7:00am, but last Sunday, sunrise found me at the Osh Bazaar. I was keen on observing, and potentially interviewing, some of the produce vendors as they went about their morning preparations. (Plus, I needed to restock the larder and wanted to beat the rush.) At this early hour, the market was relatively quiet, and so I slowly meandered through the mostly empty aisles, occasionally pausing to speak with a vendor in broken Russian or jot down some notes (I left my camera at home on this particular trip, as it tends to unsettle interviewees. The photos in this post are from other visits to the bazaar). 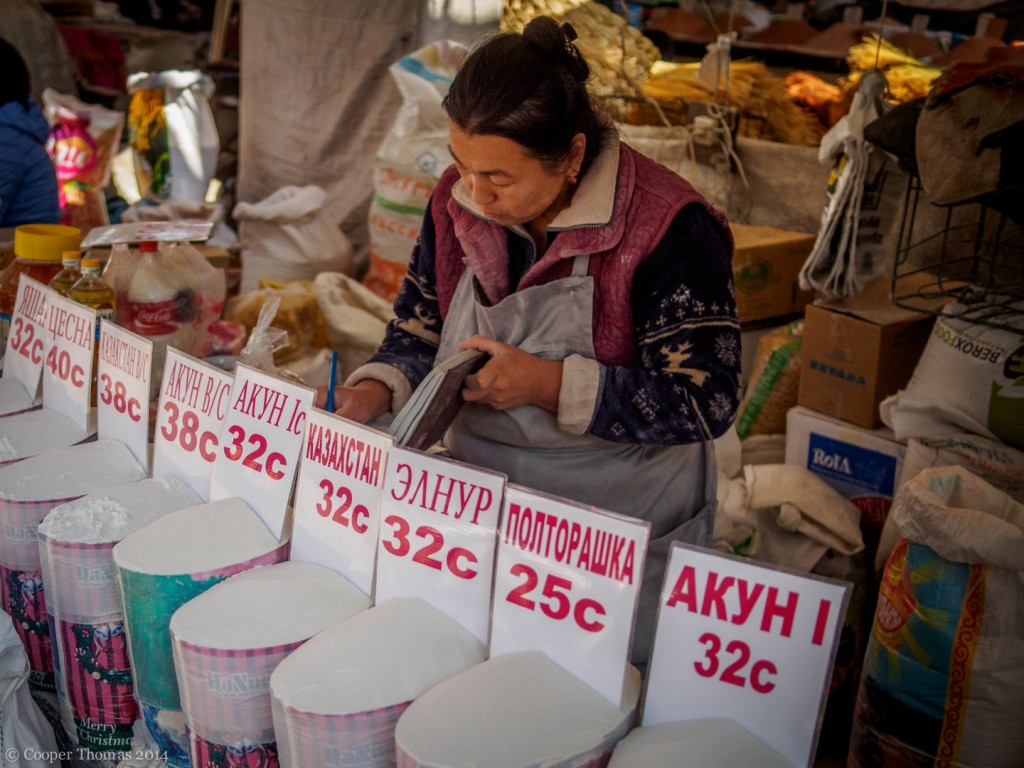 I soon discovered that many of the vendors have leased the same one- or two-meter stalls for 10 or 15 years. Consequently, they have developed deep personal relationships with their neighbors in the bazaar. As I made my way through the produce section, I watched vendors laugh together, share cigarettes, and entertain each other’s kids. Sure, workplace friendships are common everywhere, but decidedly less so when the workers are ostensibly competing for customers. Here, such competition does not appear to inhibit fraternization. 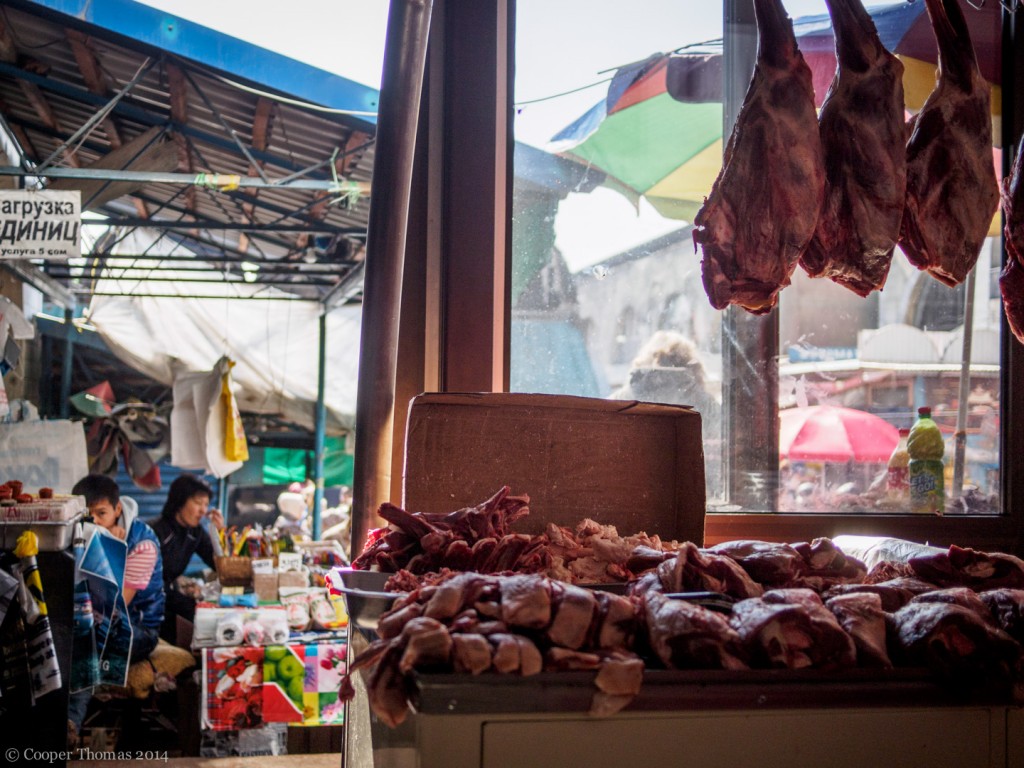 The vendors also demonstrate a strong communitarian ethos: they take turns sweeping the aisles, watch over each other’s goods, and work together to mend their quilted roof of heavy-duty tarpaulins. At one point, I watched one young vendor graciously help his elderly neighbor lift several heavy sacks of wheat onto a table, before returning to his own stall. Zhyldyz, a middle-aged woman also selling grains, told me that the stalls near the center of the bazaar are more expensive to lease, not because they receive more foot traffic, but because they’re more secure: “on the inside [of the bazaar], we look out for each other. No one steals.” While vendors at the Dordoy Bazaar rely on a private security firm for round-the-clock protection, the Osh Bazaar’s ad hoc neighborhood watch seems to do the trick.

So, how do the vendors sustain this generally collegial atmosphere? Alisher, a fruit vendor, told me that it’s partially out of necessity: “if you work next to the same person for ten years, of course you will grow close. You have no other choice.” The vendors collude economically, too: most of the vendors start their goods at comparable prices, those who undercut established prices are often ostracized from the social community. This basic form of price fixing ensures that vendors remain on relatively equal footing, and prevents tempers from flaring up, says Alisher.

These social interactions extend to the opposite side of the stalls as well. Many of the vendors have “regular” customers, whom they’ve grown to know personally after years of regular sales. One nut vendor, whom I’ll call Nurlan (he spoke to me on the condition of anonymity), told me, “for the past three years, the same woman has come to me every other week to buy dried apricots. Now, she is like family to me.” 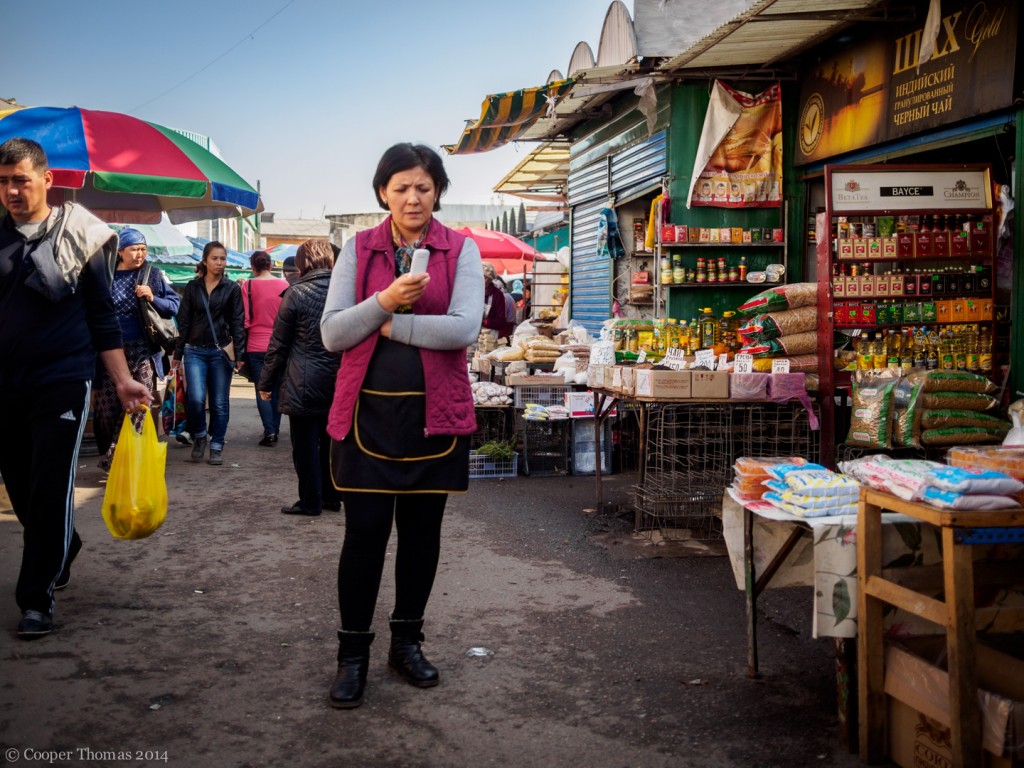 These intimate vendor-consumer consumer relationships are more common in the Osh Bazaar than in the Dordoy Bazaar, Nurlan told me, because shoppers must purchase perishable goods once or twice a week (if not more frequently), whereas they only purchase consumer goods when absolutely necessary. To prove this to me, he asked me a simple question: “How often do you buy a new television? And how often do you buy potatoes?” His point is well taken. 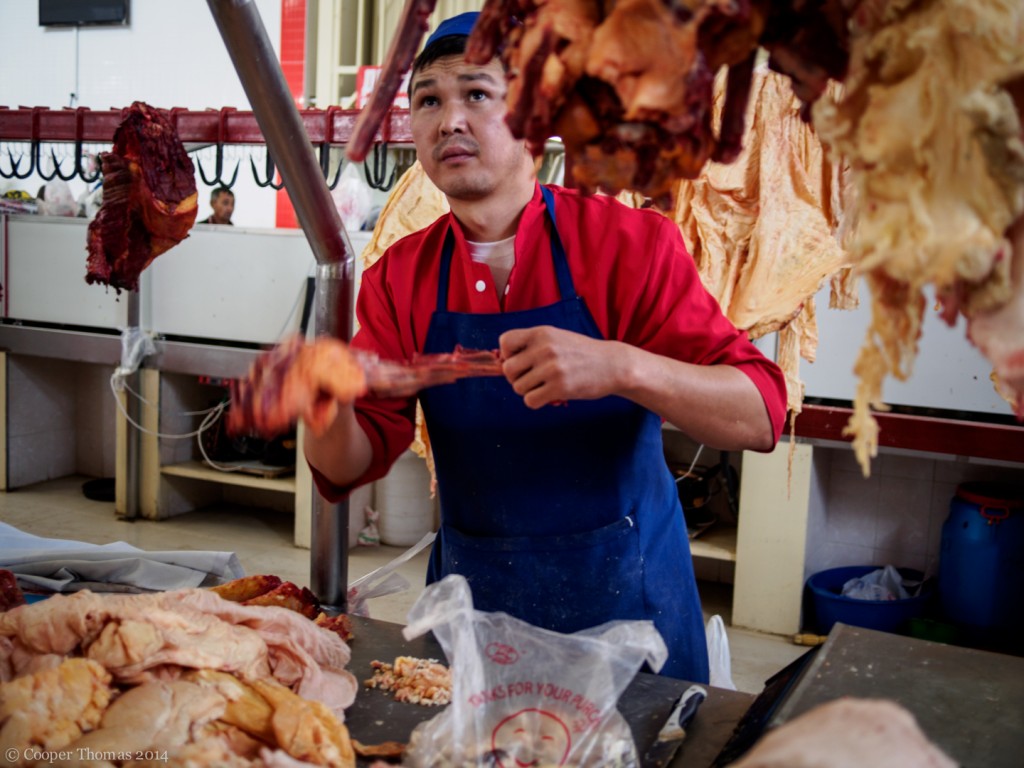 However, this highly interactive commercial culture is beginning to change. More and more western-style shopping centers and hypermarkets are emerging in Bishkek each year, and a growing proportion of Kyrgyzstan’s middle class (not to mention its generally moneyed expatriate community) is choosing to forgo the frenzied atmosphere of the bazaars in favor of a more sanitized – and considerably more impersonal – shopping experience. 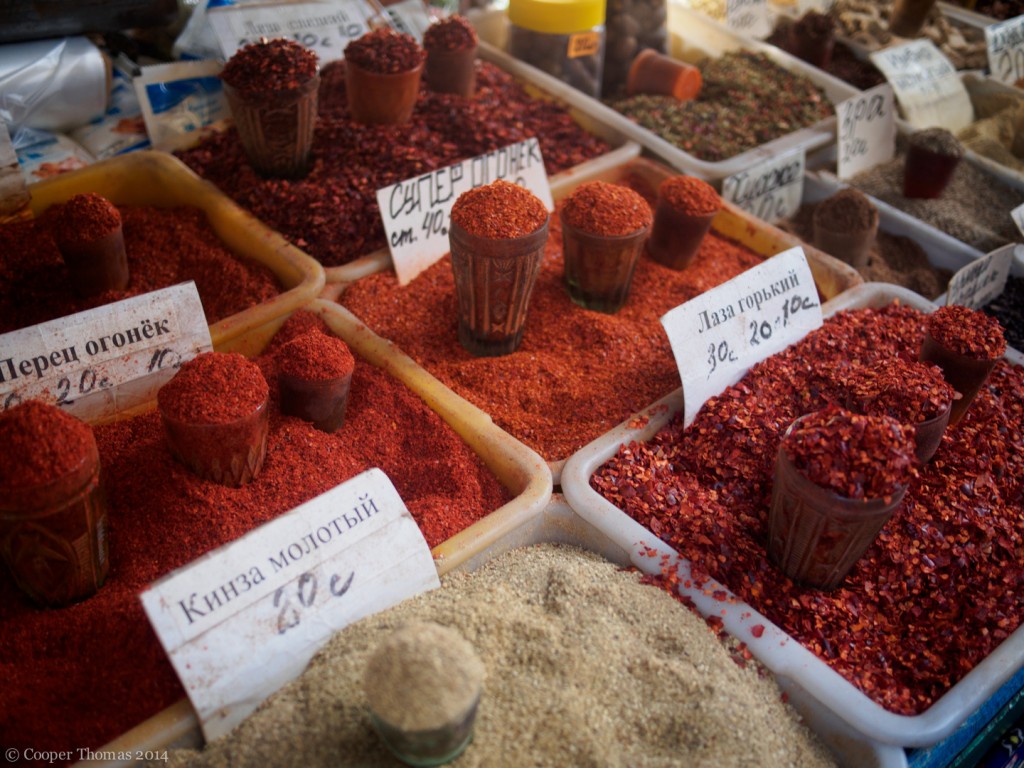 In 2011, the Frunze Hypermarket opened in central Bishkek, promising visitors “a convenient and comfortable environment with competitive prices.” Similarly, Beta Stores, a relatively new Turkish-owned hypermarket, offers just about everything the bazaar does – plus a decent selection of imported goods – at moderately inflated prices. Cyrillic signage notwithstanding, these hypermarkets are virtually indistinguishable from their western counterparts. 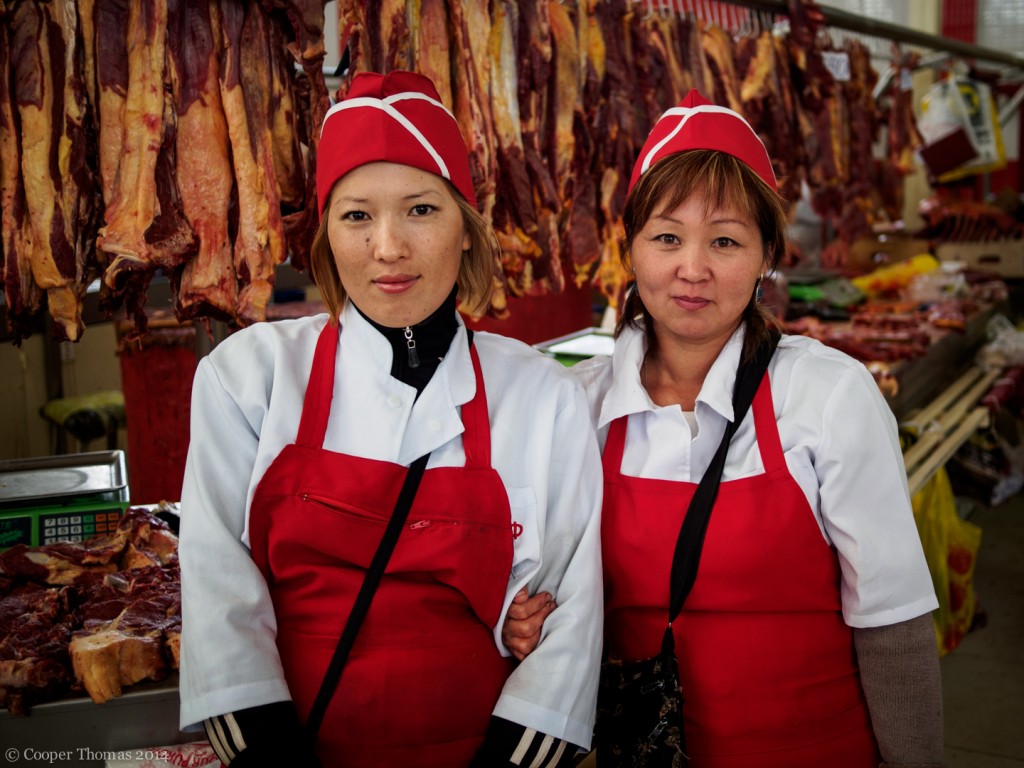 I highly doubt that these hypermarkets will displace Bishkek’s bazaars anytime soon. But they’re certainly changing the face of the city, and the ways in which residents regard the very act of shopping. And in a country as ethnically fragmented as Kyrgyzstan, I think the bazaar’s role as a communal social hub is every bit as important as its underlying economic function. In any case, I’m going to keep buying my broccoli at the Osh Bazaar.