Mass Transit in the Kyrgyz Capital

Although Bishkek is a relatively compact city, it boasts three different modes of mass transit: маршрутки (minibuses), троллейбусы (electric trolleybuses), and автобусы (buses). Together, these networks whisk thousands of passengers across the city each day. Their routes extend to the farthest reaches of Bishkek, including the жилые районы/микрорайоны (residential districts) that encircle the CBD and the cамовольные новостройки (irregular settlements) that lie at the city’s geographic fringes. While Bishkek’s aging fleet of vehicles is by no means glamorous – or even very comfortable, for that matter – the public transportation system is exceptionally cheap and efficient.

The marshrutki (from the Russian word “маршрут” or “route”) are elongated Mercedes Sprinter vans that, as their name suggests, run fixed routes. They’re very similar to the dolmuş in Turkey. Incidentally, the word “dolmuş” means “it’s full” – however, it’s fair to say that Bishkek’s marshrutki are considerably less comfortable than their Turkish brethren. Though the vans seat just 12-16 people, often, up to 30 people will cram onto a single bus. And the marshrutki’s ceilings are super low – I’m 6’2”, and can only stand up straight if I’m situated directly below the emergency roof hatch. Suffice to say, these vehicles are not well suited for the claustrophobic. On the bright side, the marshrutki are often so densely packed that passengers have no room to topple over. 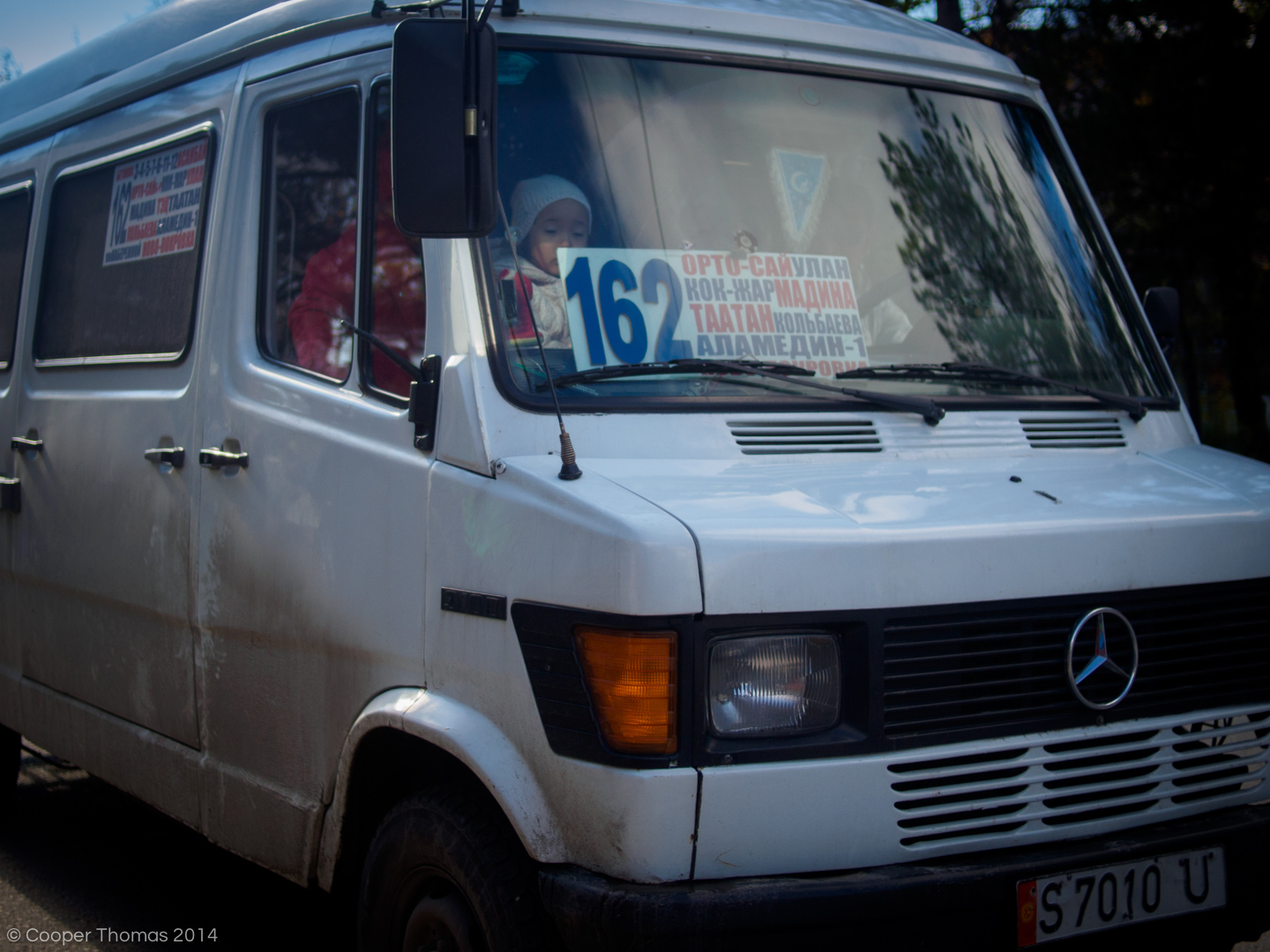 A crowded marshrutka in downtown Bishkek.

The vans have just one door, and so in order to enter or exit the vehicle, one must shove his/her way past dozens of precariously balanced passengers. It’s not uncommon for folks to miss their stops, simply because they’re unable to reach the door in time to alight. And oftentimes, the drivers won’t come to a complete halt, forcing passengers to leap from the rolling vehicle to the ground below. This moving dismount is just as much an art as it is a skill – especially in the wintertime, when the icy streets can send you skidding. 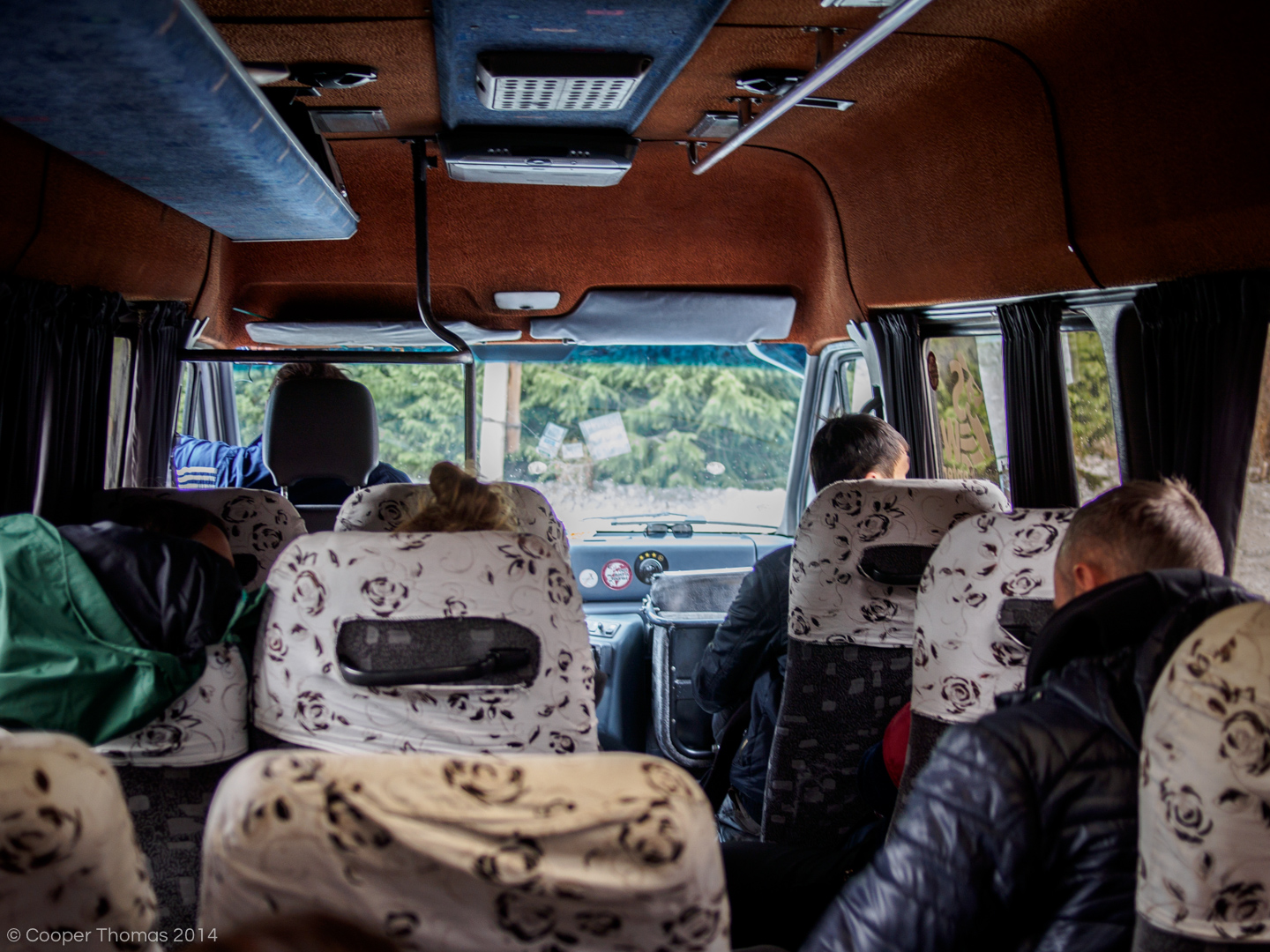 The interior of a marshrutka. This one is uncharacteristically empty, as it was chartered for a private trip.

There are over a hundred unique marshrutka routes in Bishkek, each one identified by a three-digit number. These numbers are prominently displayed in the front window of the vans, along with an abbreviated list of landmarks, including public squares, shopping centers, and busy intersections. However, the marshrutki will stop virtually anywhere along their routes, both to pick up new passengers and to allow passengers to disembark. In fact, the marshrutki won’t stop unless you explicitly notify the driver that you’d like to alight, by saying the magic words “остановите здесь, пожалуйста” – “stop here, please.” Unfortunately, this consonantal jumble is easier to read than to pronounce aloud, so I usually accompany my verbal request with a frantic gesture toward the sidewalk. 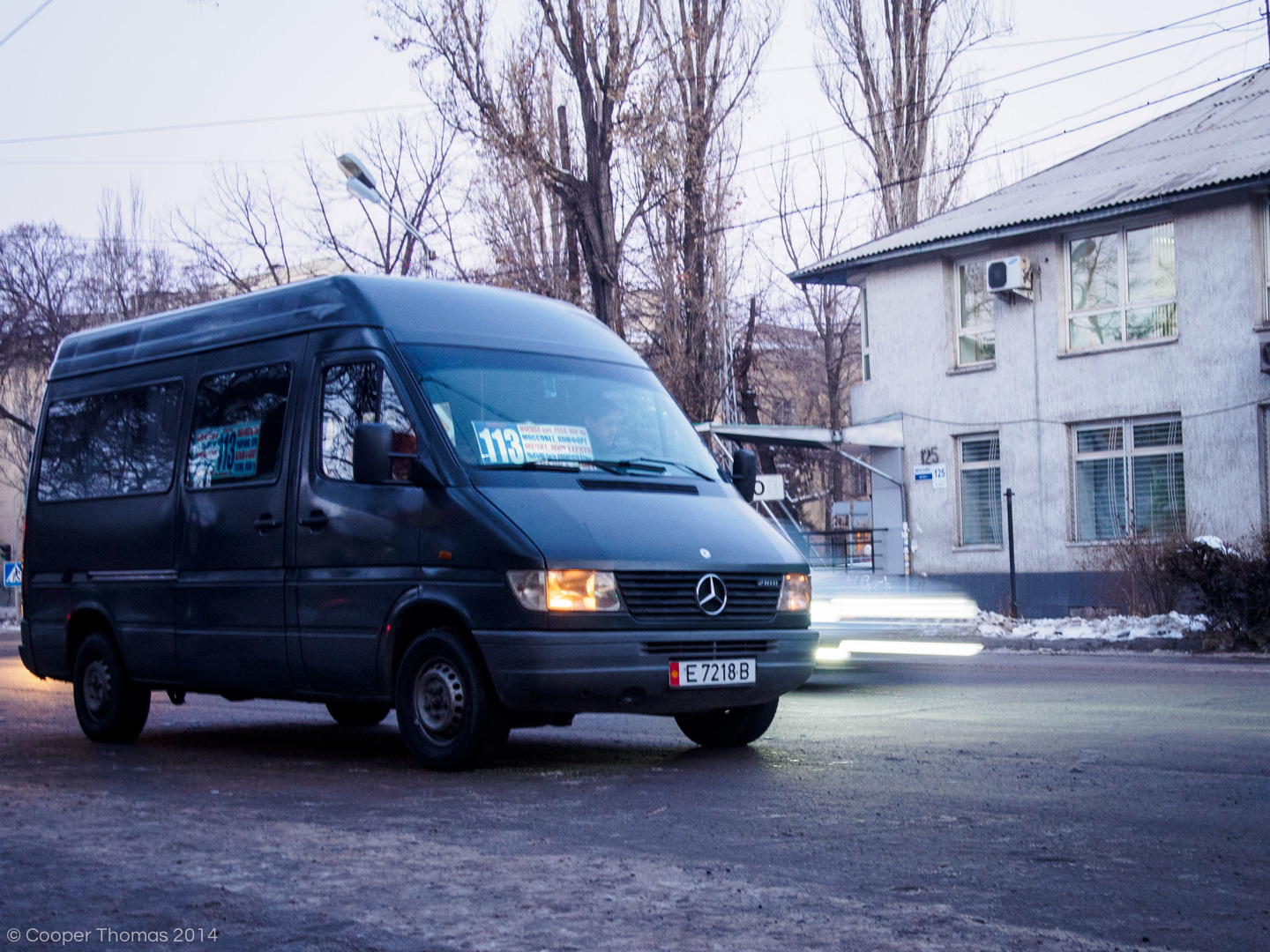 Most marshrutka drivers have perfected the skidding stop.

The marshrutka fare is 10 som (about $0.20 USD) before 9pm, and 12 som from 9pm til midnight. Drivers prefer if you pay with exact change, but they’re also exceptionally adept at counting change while simultaneously steering, shifting, talking on a cellphone, and smoking a cigarette. Each driver has a different way of dispensing change – some stick stacks of coins in the A/C vents for easy access, while others rely on magnets (to which the coins stick) to keep their change within reach. Most drivers simply toss bills onto the dashboard, where they slowly accumulate over the course of the day.

The marshrutka drivers are notoriously reckless, and many are apparently unlicensed. As such, the rides are sometimes quite harrowing, especially compared to the other modes of transit. Nevertheless, the marshrutki are certainly the fastest and most frequent option, and consequently the best choice for any pressed for time.

The trolleybuses are decrepit, but subtly charming, electric trams powered by unreliable overhead cables. The vast majority of these buses are old Soviet-era ZiU-682s, a model that was virtually ubiquitous in cities throughout the Soviet Union until, like, 1990. Considering that most trams are over 20 years old, it’s not surprising that the vehicles show considerable wear, both inside and out. It’s not uncommon to trip over tangles of exposed wires near the doors, and the emergency roof hatches don’t always seal properly, so that in the wintertime, some unlucky passengers are dusted in snow. 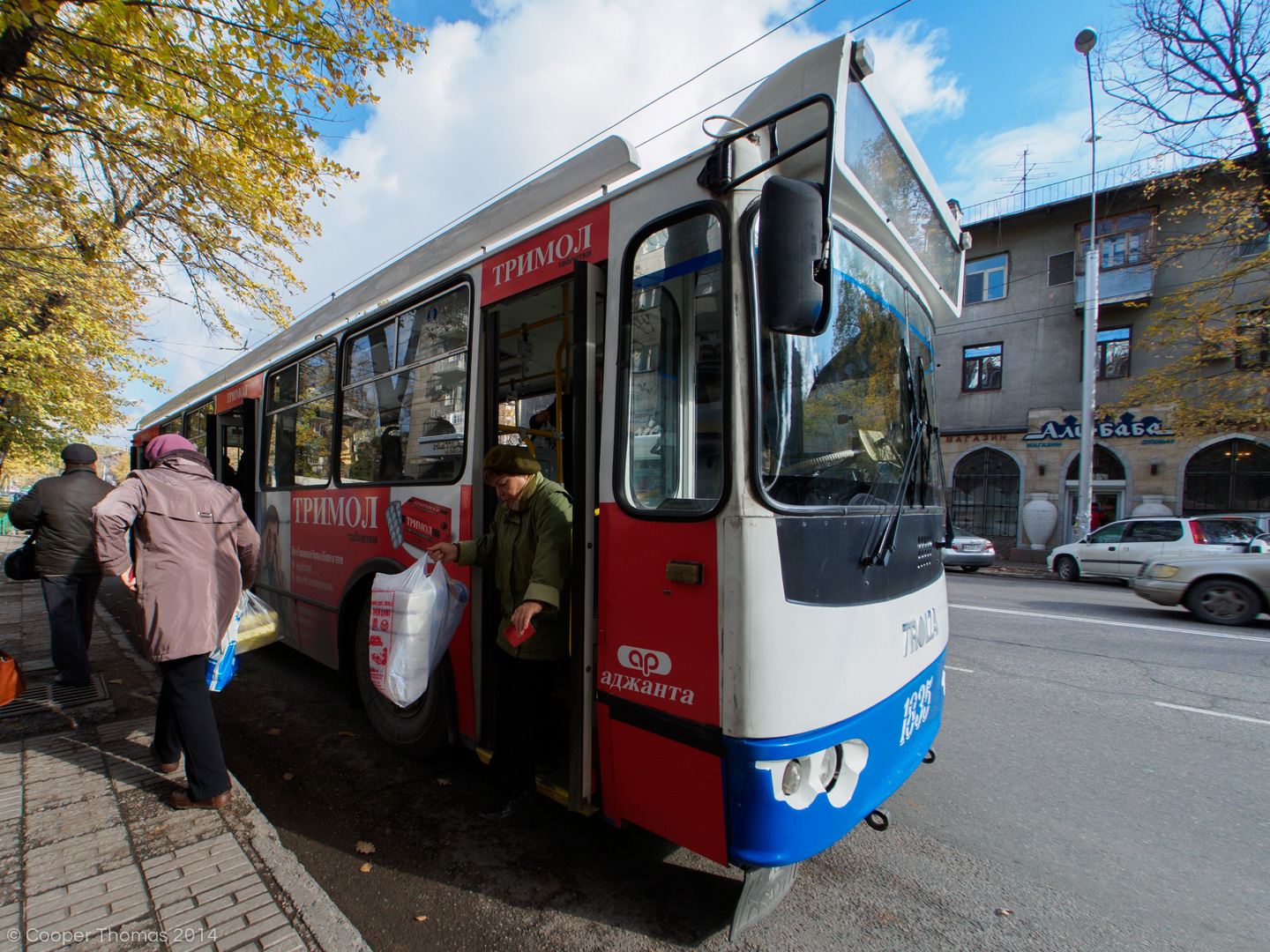 Babushkas disembark from a tram

The rooftop runners that supply power to the buses often disconnect from the overhead cables. Fortunately, the drivers are always prepared for this contingency: they simply exit the bus, climb onto the roof, tug a couple ropes until the runners fall back into place, and then carry on driving. They can usually restore power in five minutes or less. However, since the buses share the overhead lines, serious mechanical difficulties typically incur network-wide delays, as a single malfunctioning vehicle will block all buses behind it. Fortunately, this has only happened on a couple of my trips. 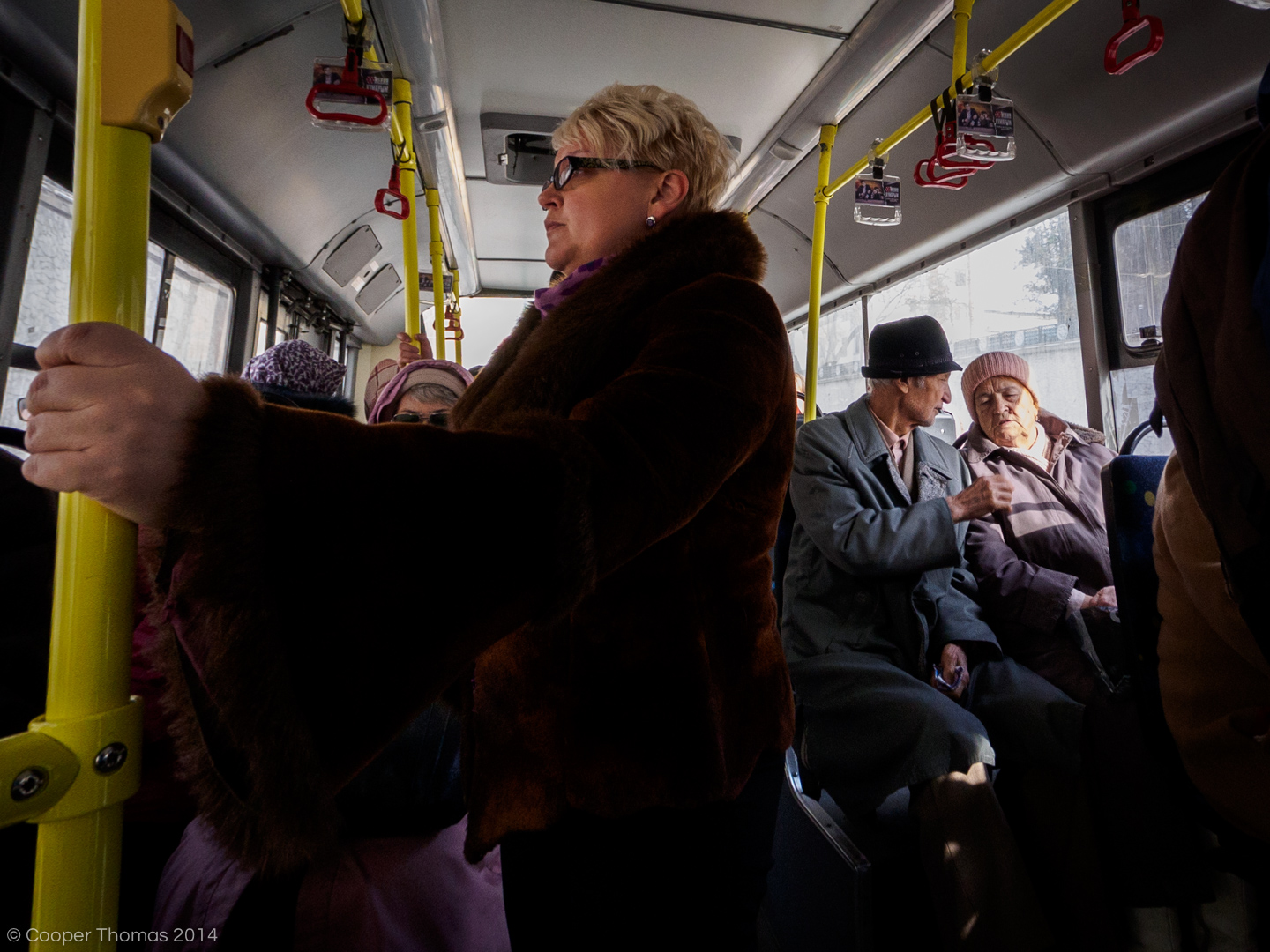 Tram passengers. The vast majority of passengers seem to be over 50 years old.

Despite these shortcomings, the buses are undeniably pleasant to ride on, lurching motions notwithstanding. The buses are spacious, they feel solid, and the malfunctioning doors often allow a fresh breeze to waft through the interior. Plus, around the new year, all of the vehicles were decorated with tinsel, ornaments, and what appeared to be pinatas. You won’t find that attention to detail on the MAX.

There’s no doub that the buses are not as efficient as the marshrutki: for one, they only stop at official stops, which are often located quite far apart. Also, the buses ply just a dozen or so routes, most of are contained to the city center. On the flip side, however, the trams stop at every single stop, so passengers needn’t warn the driver of their intention to disembark. Passengers exit through the front door, paying the driver on their way out. The fare is just 8 som (about $0.16) – that’s two som cheaper than the marshrutka – so if you’re looking to save some major coin, take these puppies. Plus, the elderly ride free, as do those in uniform. Savvy riders might consider visiting a military surplus store and investing in a set of dress blues.

And lastly, there are the buses, which fall somewhere between the marshrutkas and the trams in terms of size, speed, and comfort. The buses are considerably shorter than most city buses I’ve seen, and they’re quite tall, giving them a comically ill-proportioned appearance. Most of the buses are newer than the trams, but given their heavy usage, they also show considerable wear. They cover more ground than the trams, as their routes are not constrained to the overhead power lines, but they’re still considerably less common than marshrutki. 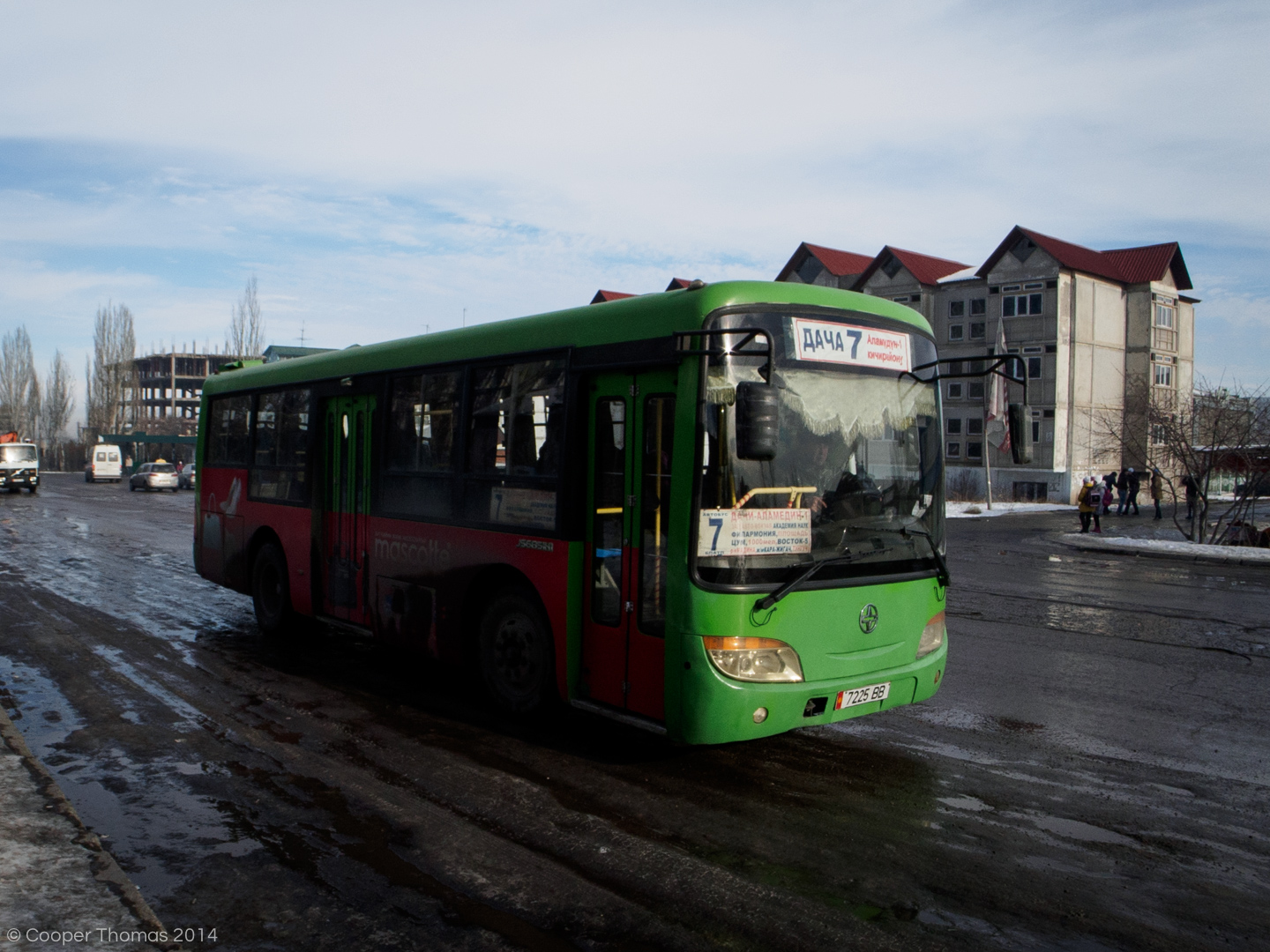 A bus, on the outskirts of Bishkek

Frankly, I haven’t ridden the bus too much, so I can’t really comment on the network’s overall efficiency. I’ve been in buses that were stuffed to the gills with passengers (still more comfortable than a marshrutka), and I’ve been on empty buses. As with the tram, the fare is 8 som, paid to the driver upon exit. 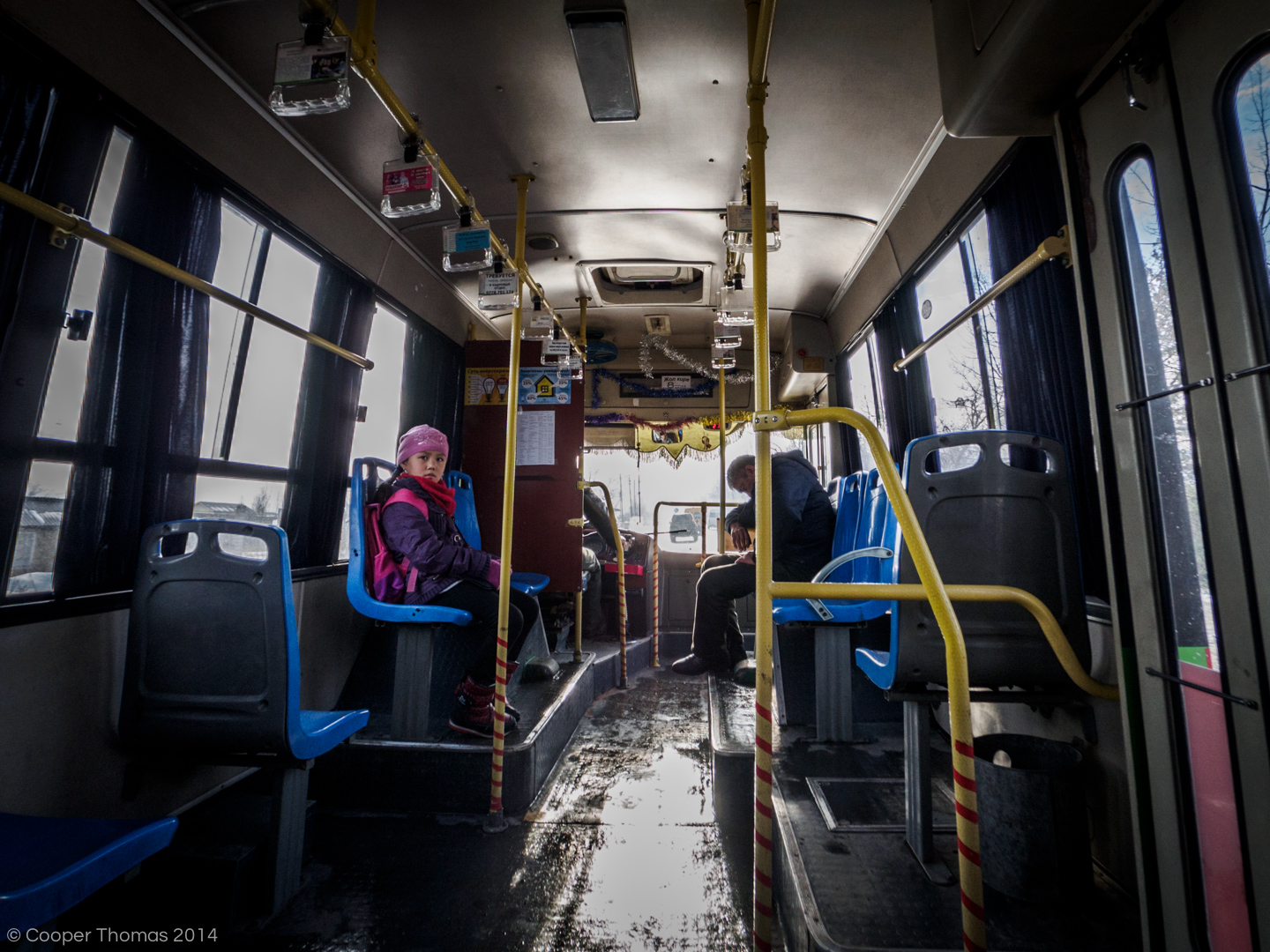