There and Back Again: Burana Tower

← Buildings That I Love, Part Four: Experimental 18-Story Apartment Building When in Arslanbob →

The Kyrgyz are historically a semi-nomadic people, and they’ve left behind few permanent traces of their two-thousand-year existence in Central Asia. Indeed, Kyrgyzstan is known not for its ancient mausoleums, but for its virgin mountains, alpine lakes, and green pastures. However, there are a few cool historical sites scattered throughout the country. One of the most interesting (and definitely the most accessible) of these is Burana Tower, an 11th-century minaret that lies just 60km east of Bishkek. This minaret is one of the last remaining vestiges of the ancient city of Balasagun, the former capital of the Qarakhanid Khanate and an important Silk Road pitstop. 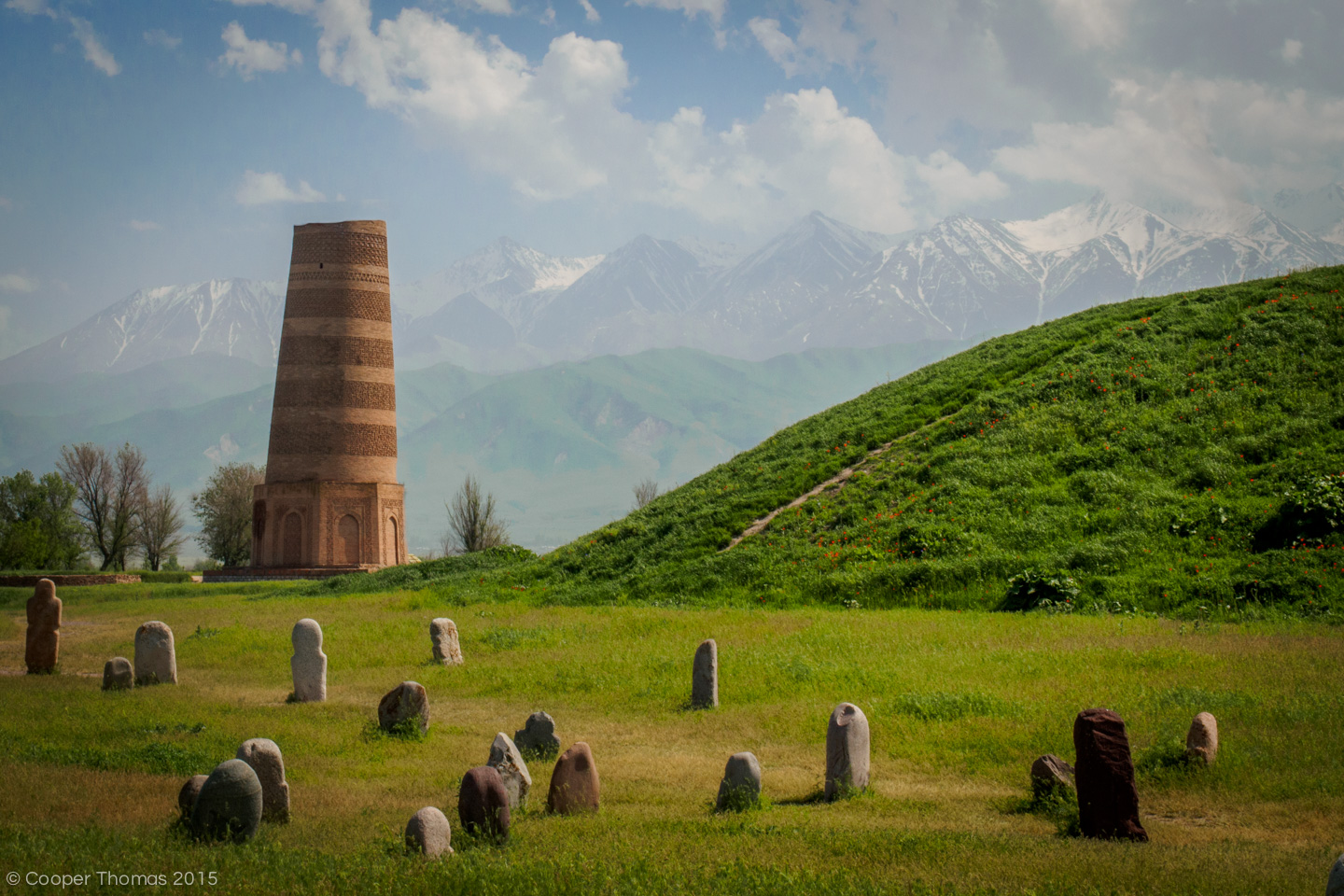 Burana Tower in spring, with burial stelae in the foreground

I first visited Burana last October, and I made another pilgrimage to the tower about a month ago. Seven months might not seem like a long time, but the landscape looks completely different now than it did last fall: the sun-bleached grass is now a verdant green, the distant mountains are covered in snow, and the fields surrounding the tower are alight with wild poppy blooms. 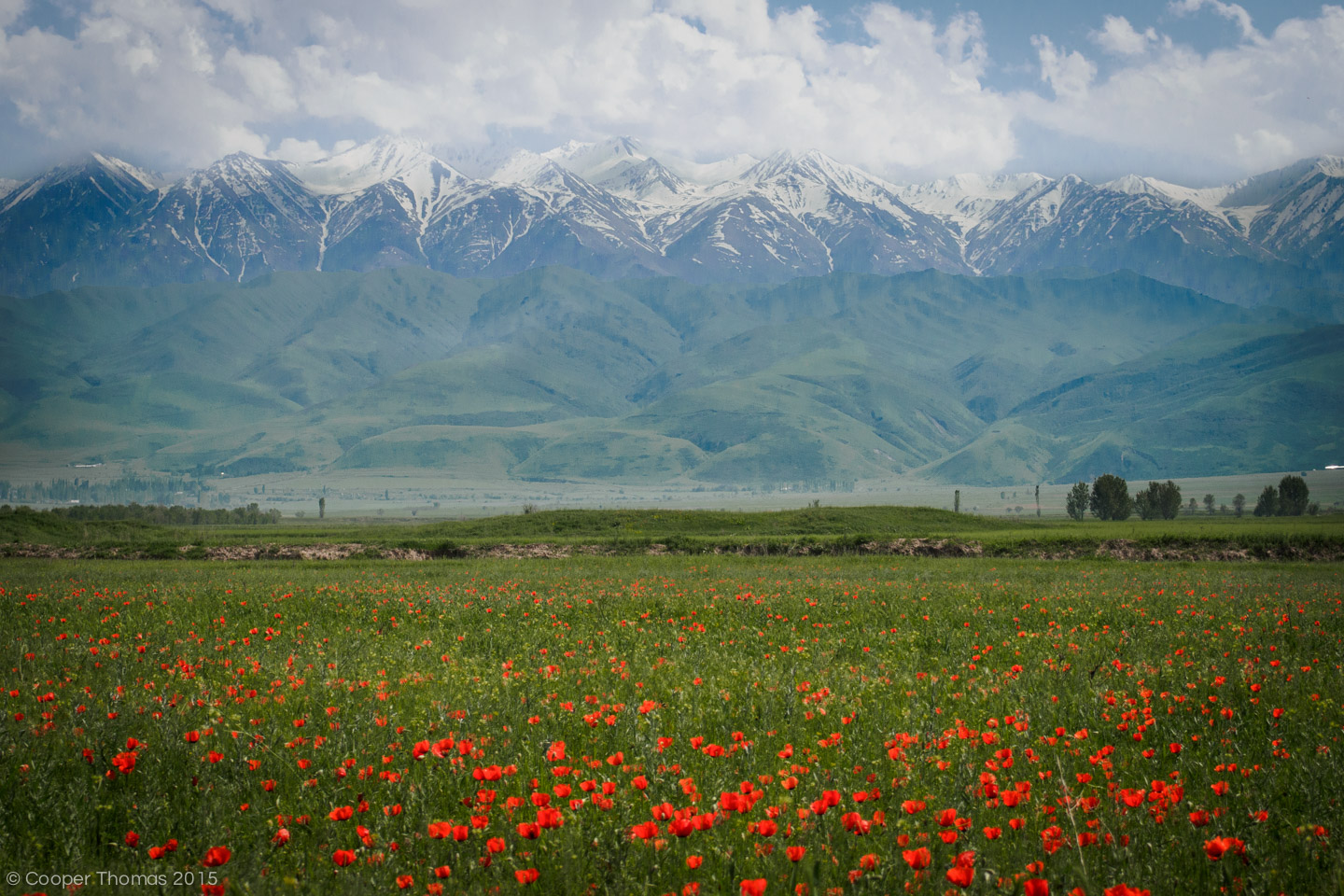 A field of wild poppies below the tower

The minaret originally stood 45m tall, but an earthquake in the 15th century destroyed the upper half of the tower, and it now tops out at 24m. Still, it’s quite an impressive structure. Like many monumental brick constructions from this era, the minaret leans ever so slightly to one side. That it has survived complete destruction in one of the most seismically active regions in the world testifies to its structural robustness, however. 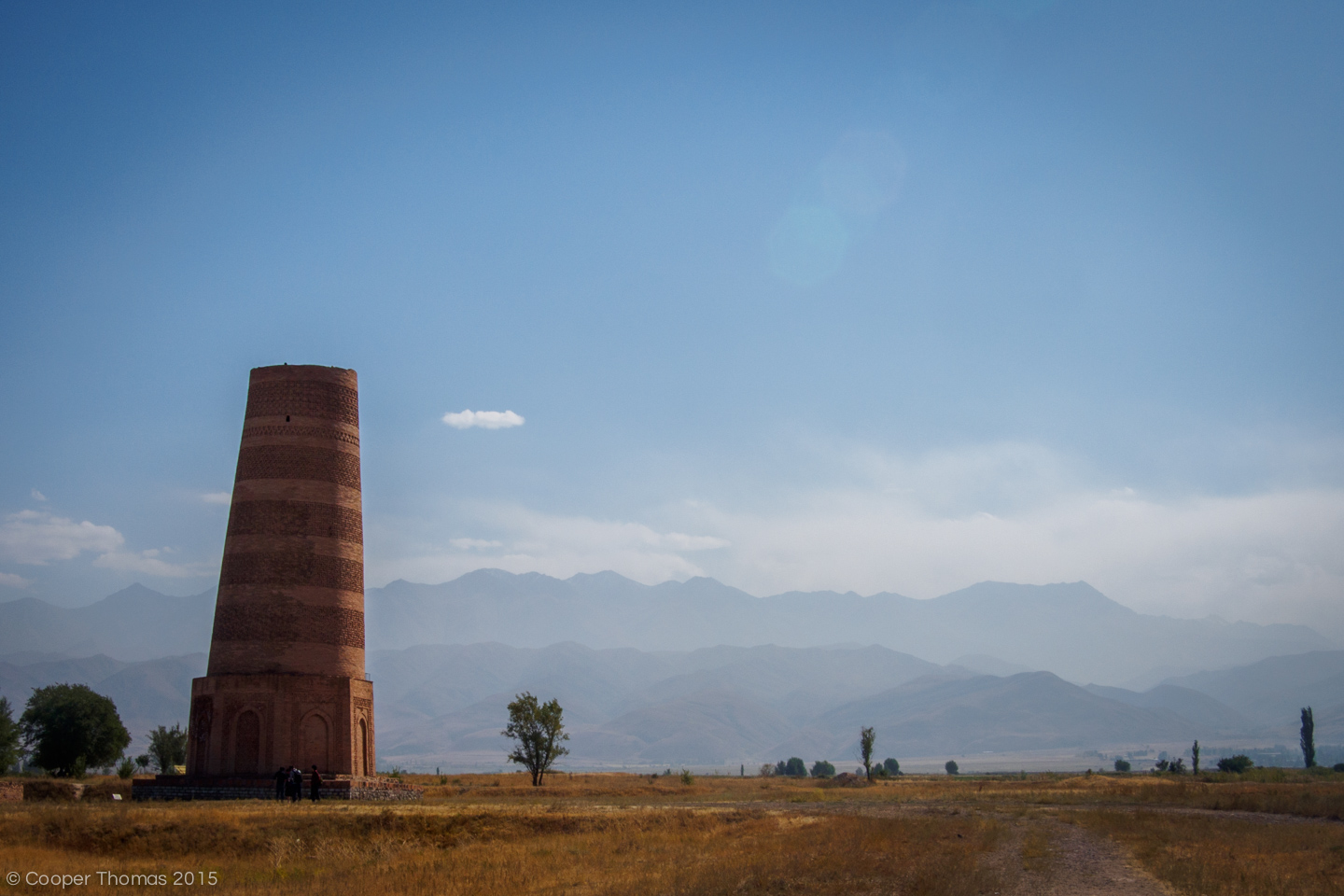 The tower in October. Haze obscures the mountains to the south

The tower was restored in the early 20th century, and again in 1970, after locals stripped some of the bricks for use in their own construction projects. Both efforts sought to restore the structure to its original appearance, rather than spiff it up unnecessarily. A close inspection of the tower reveals neat architectural details, like the intricate brick patterning, and the small windows, which are spaced far enough apart to illuminate the narrow staircase inside without disrupting the exterior design. 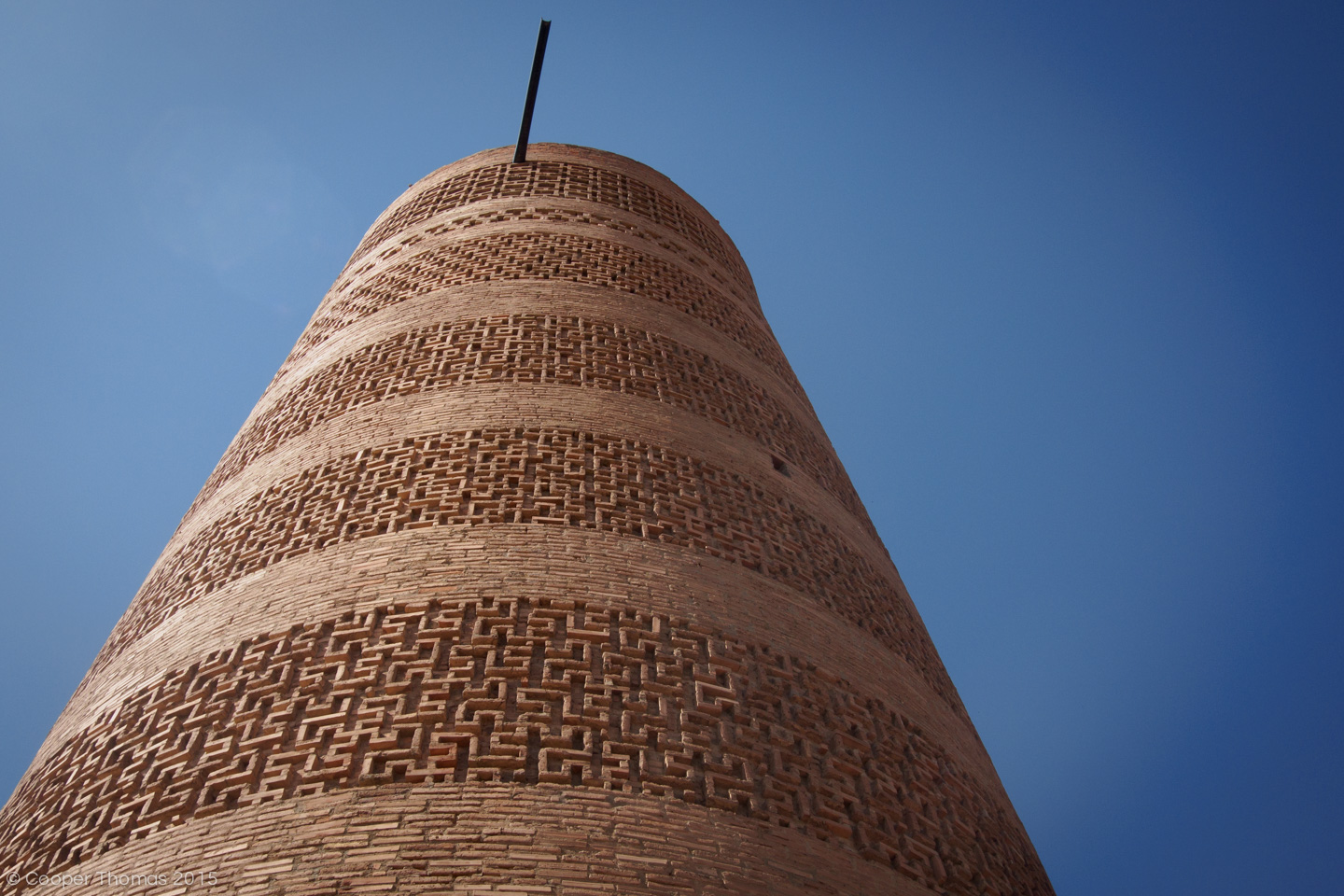 The staircase is not for the faint of heart. It’s frightfully steep, and hardly wide enough to allow two people to squeeze past each other. It certainly wouldn’t pass any safety inspections in the West. But the platform at the top of the tower offers fantastic panoramic views of the mountains to the south, and the fertile fields of the Chuy Valley to the north. 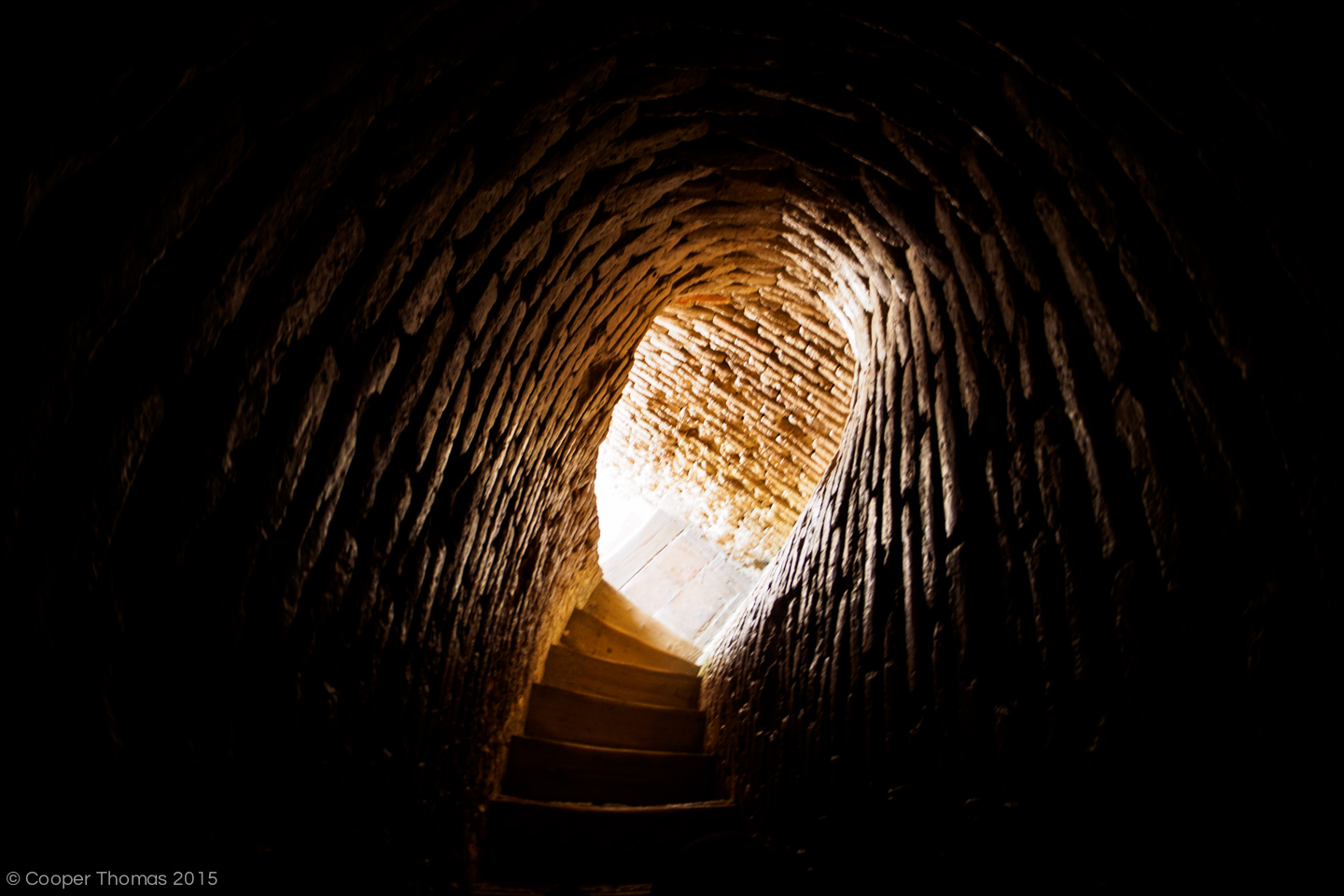 A view toward the exit 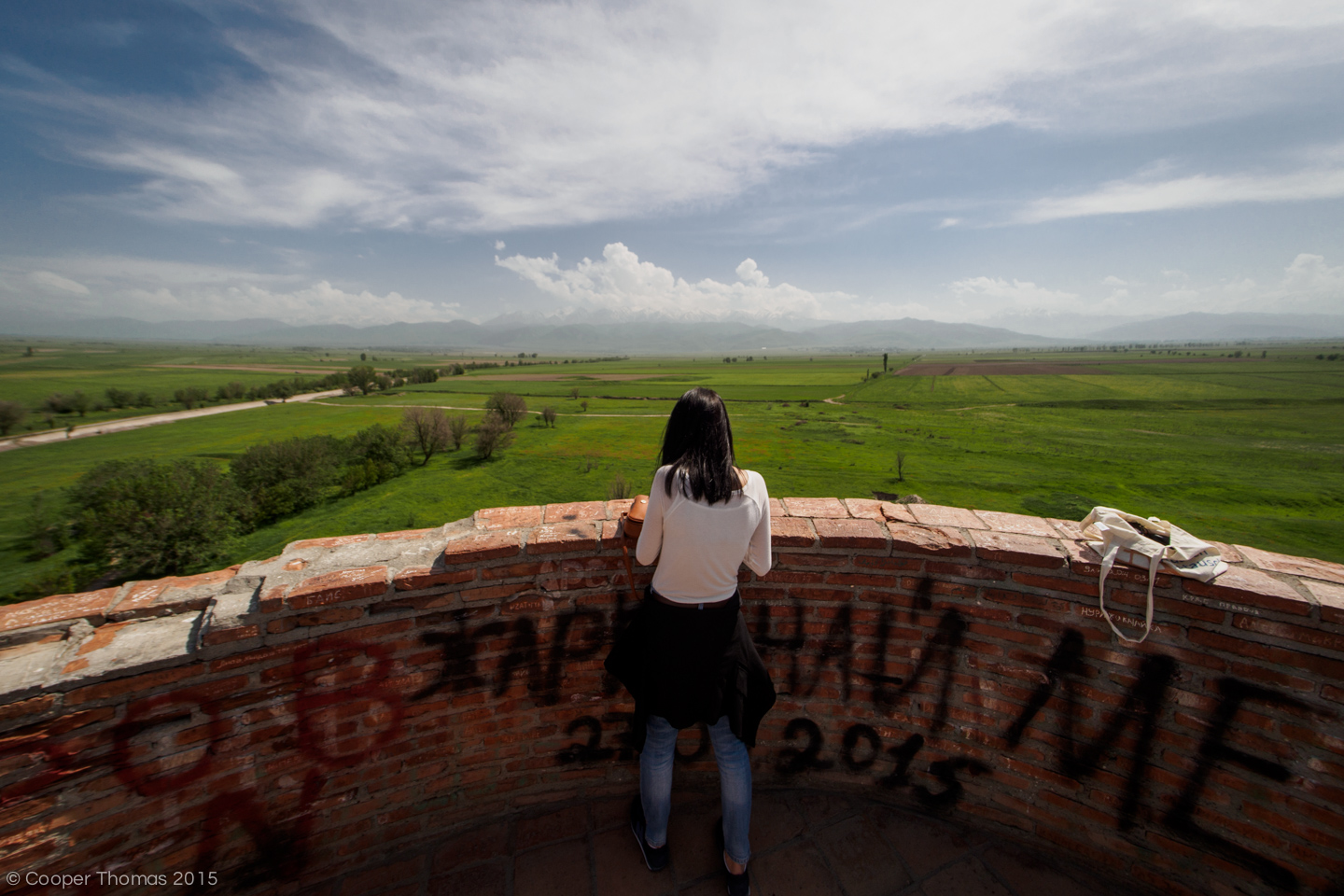 Looking out from the viewing platform

Just as interesting as the tower itself is the field of balbals, or anthropomorphic stelae likely used as gravestones, adjacent to the tower. Although the balbals were moved here somewhat recently, many of the stelae are as old as the minaret itself, if not older. To our modern eyes, the characters they depict seem quite comical, much like the royal portraits of yore. They are oddly proportioned, with misshapen heads and short torsos, and they often wear strange facial expressions. Nevertheless, these gravestones were produced by the some of greatest artisans of their time. 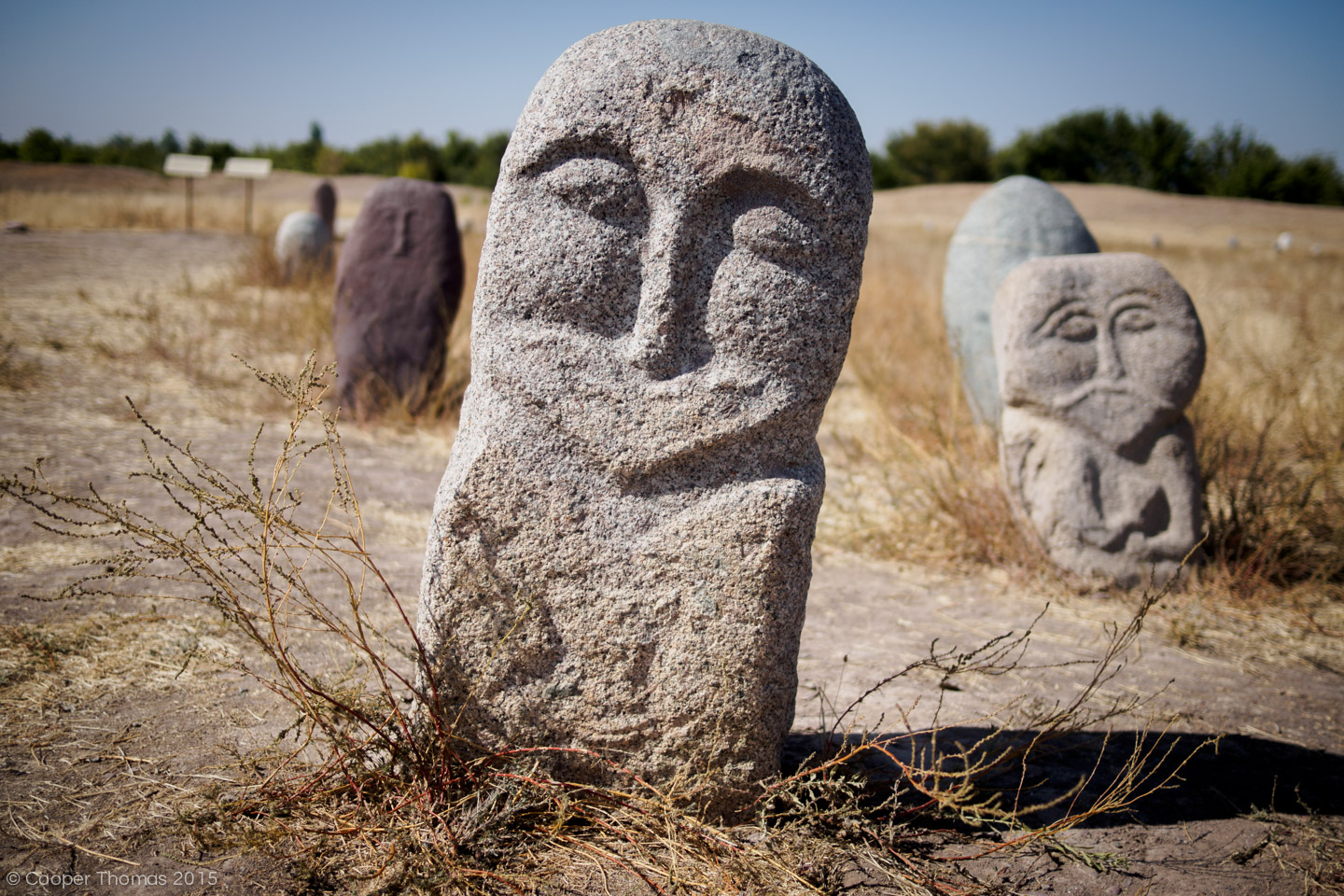 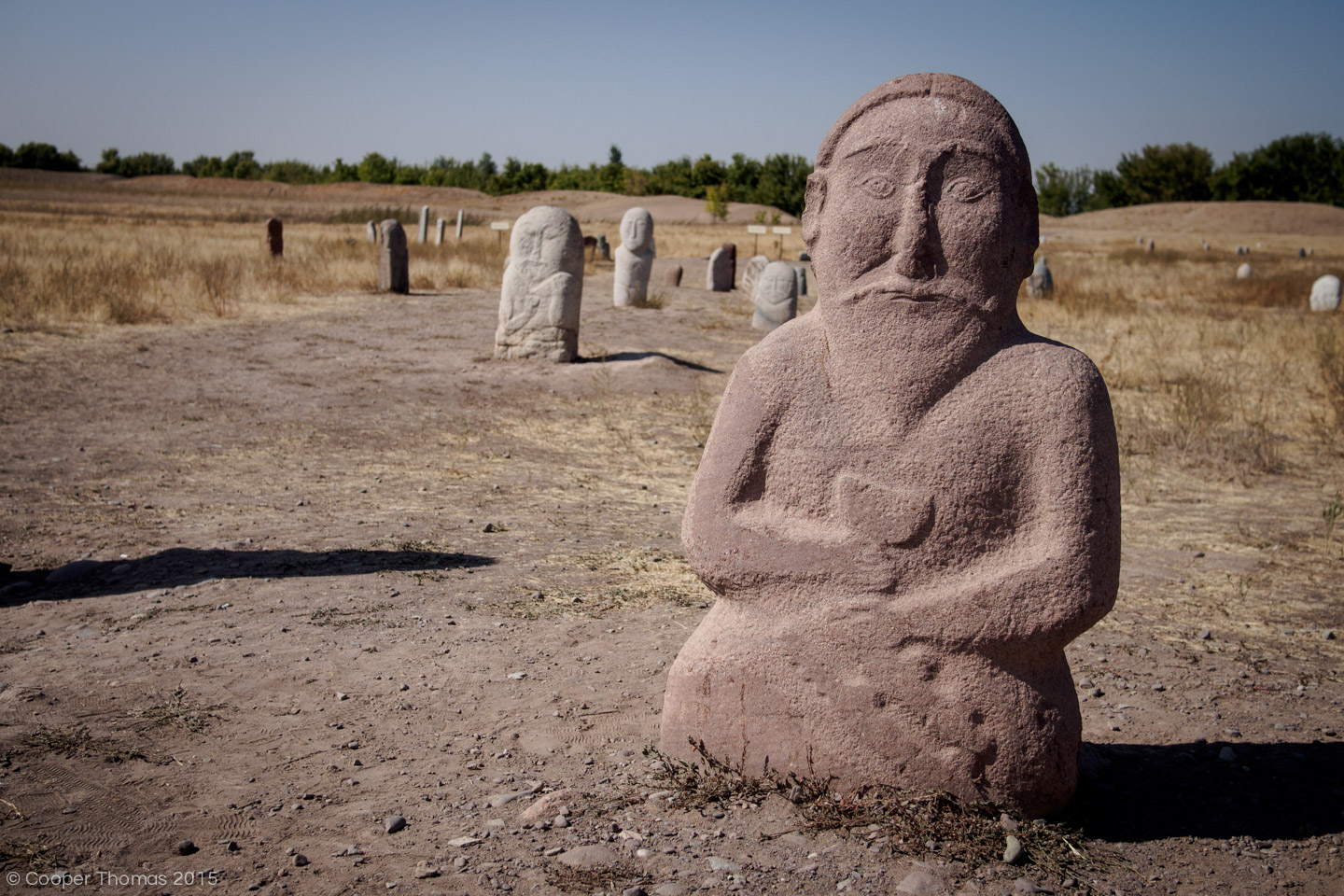 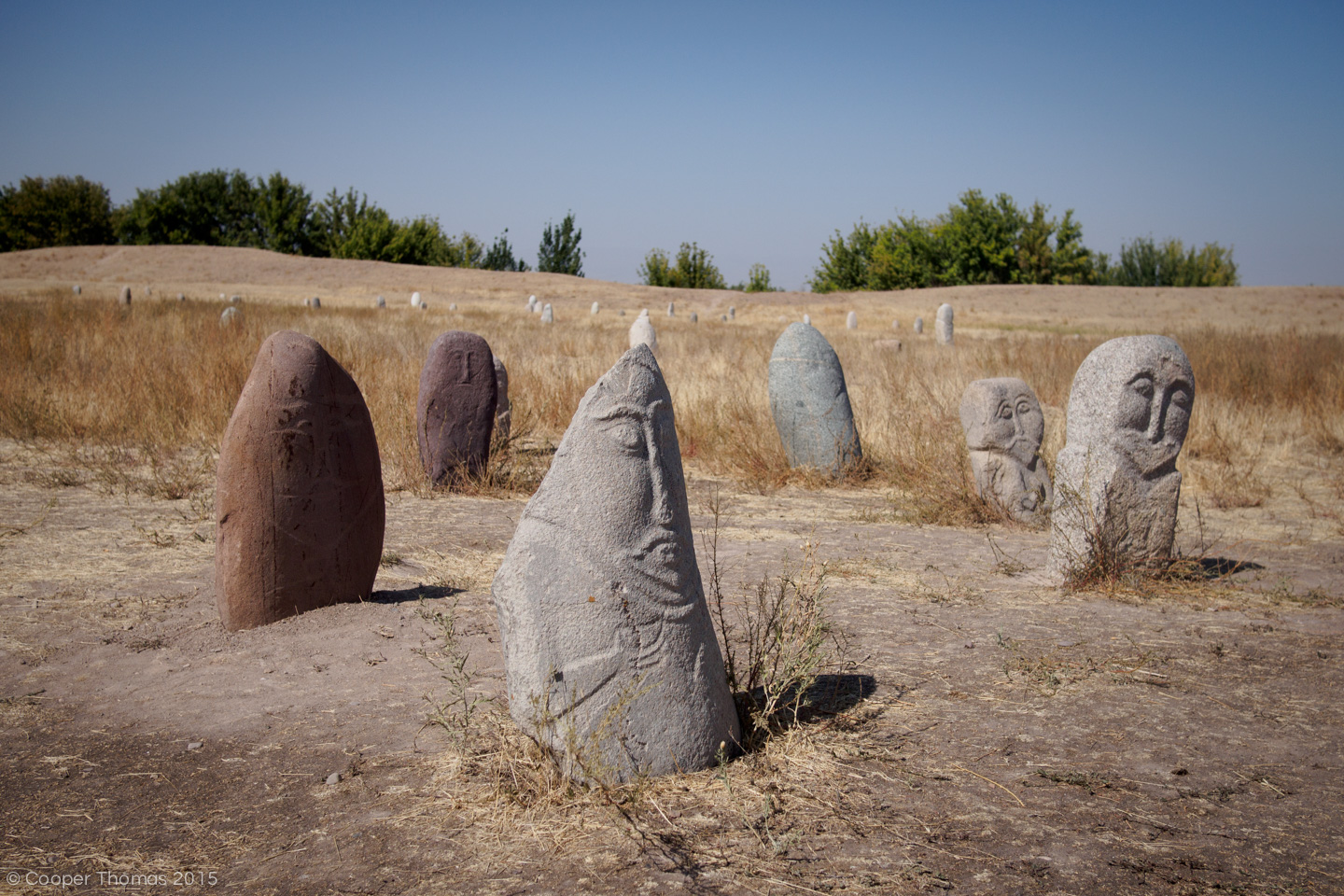 There’s also a small museum near the tower, which contains a few interesting archival photos of the early restorations, a collection of artifacts recovered from the area, some neat paper-cut diagrams, and a fantastic 3D topographical map of Kyrgyzstan. All in all, the site is definitely worth the visit, even for those just passing through the region.

And here’s a bonus glamor shot of yours truly, for the ladies. Because poppies. 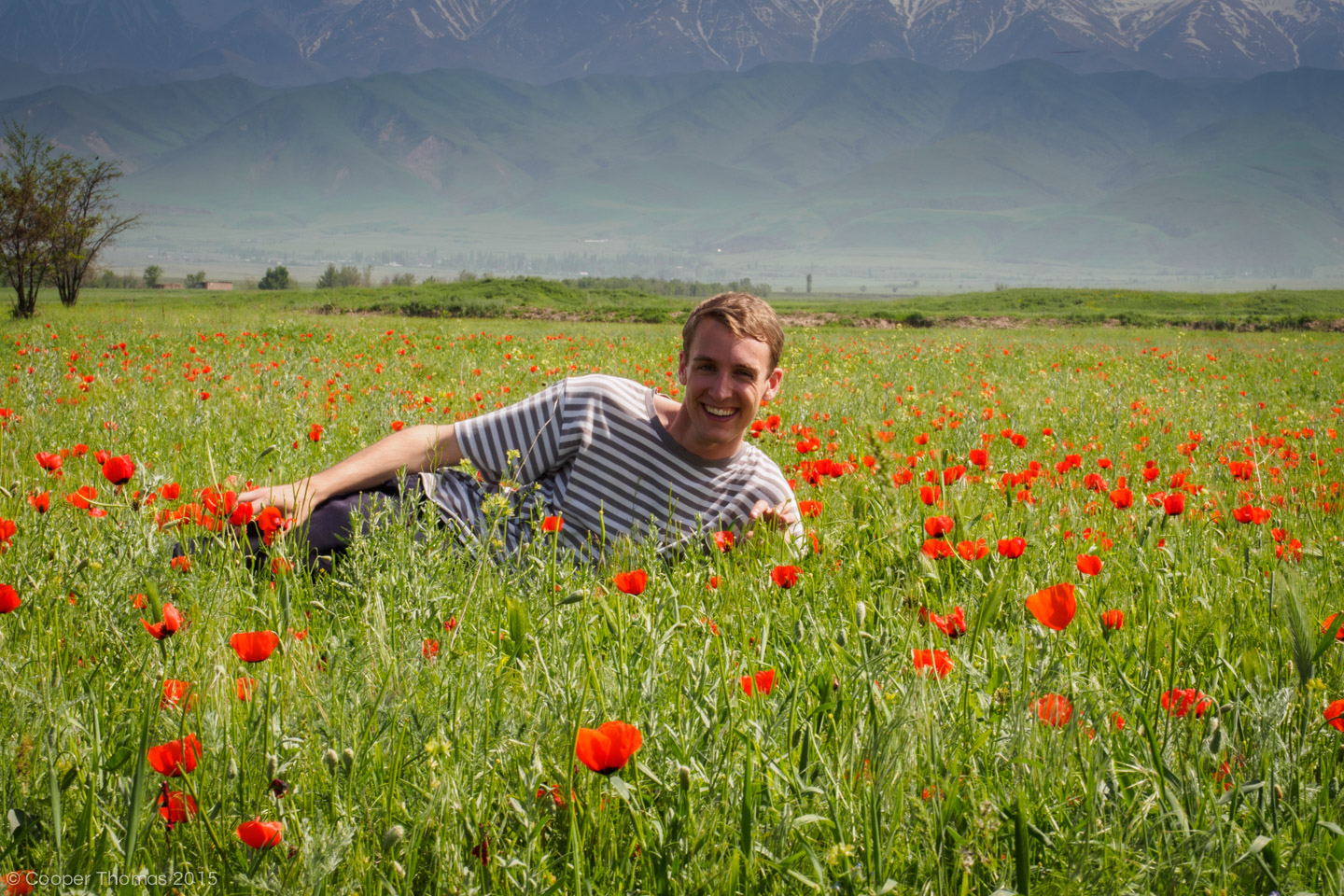