Buildings That I Love, Part One: Bishkek Wedding Palace

This post is the first in a series of short missives exploring the history and architecture of some of Bishkek’s most interesting buildings. Some of these buildings might be considered Bishkek landmarks, while others seem to go unnoticed by tourists and locals alike. It’s no coincidence that most are Soviet Modernist constructions, partially because I’m enamored of this particular architectural style, and partially because the history of these buildings is often deeply connected to the history of Bishkek itself. These weathered, crumbling concrete monoliths are relics of a bygone era. At once grand and unpretentious, they embody a socialist utopian ideology that is gone, but certainly not forgotten.

Our tour begins with the Bishkek Wedding Palace, a curious structure with an appropriately curious history, located near the circus in the northeast part of the city. This pointy glass-and-marble hulk, a product of the 1980s construction boom that produced many of Bishkek’s most memorable buildings, stands out against a sea of seemingly two-dimensional apartment buildings. 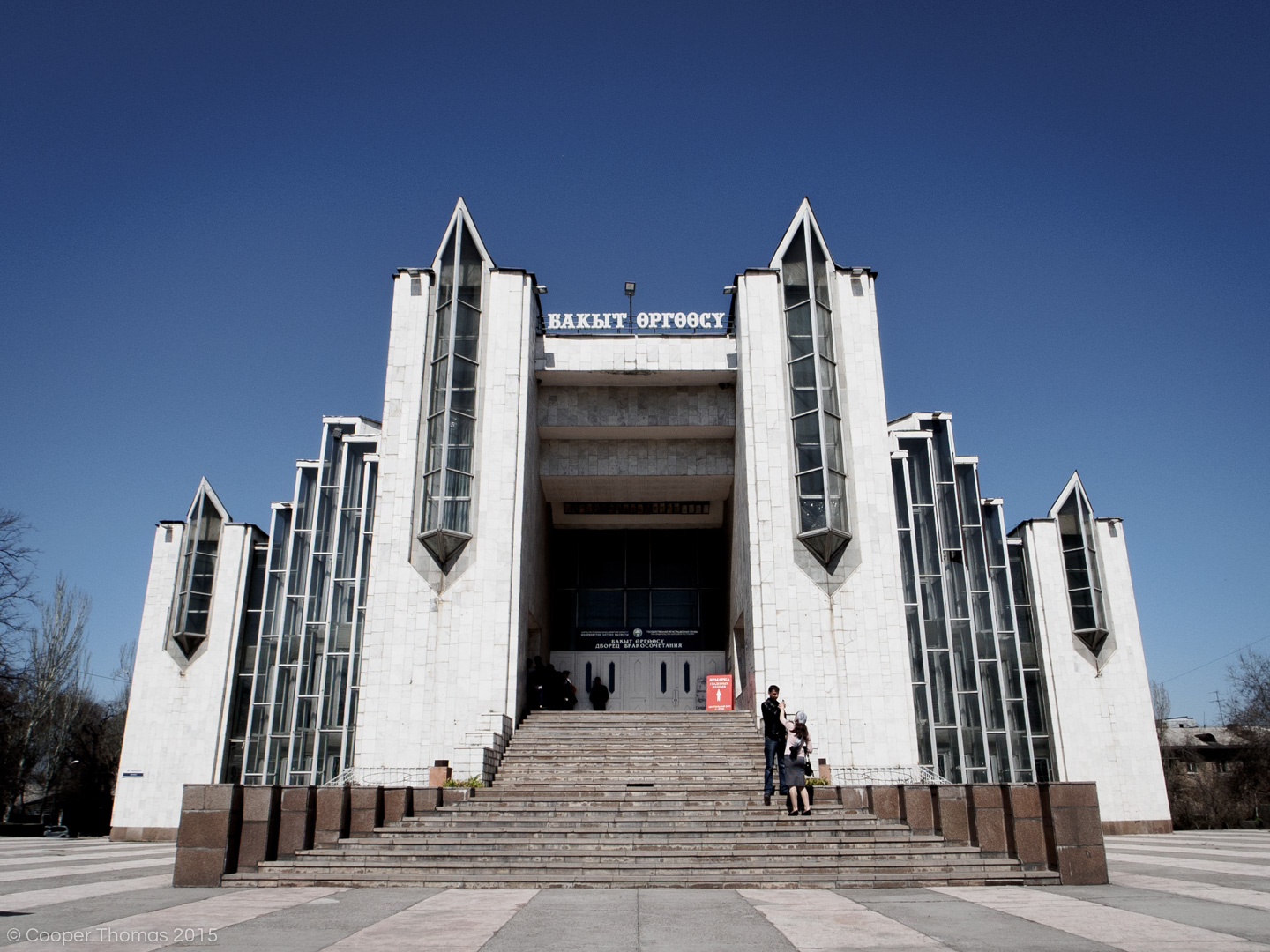 Long glass windows protrude from all sides, reaching from the ground to the sky and glinting in the sunlight. They make the building appear taller than it actually is. To me, the Wedding Palace looks like the architectural progeny of the Emerald City, Reykjavik’s Hallgrimskirkja cathedral, and a block of marble…albeit considerably less impressive. Fifteen years ago, the building’s decidedly modern design was probably considered edgy and avant-garde. Today, it looks slightly dated, in an oddly charming way. 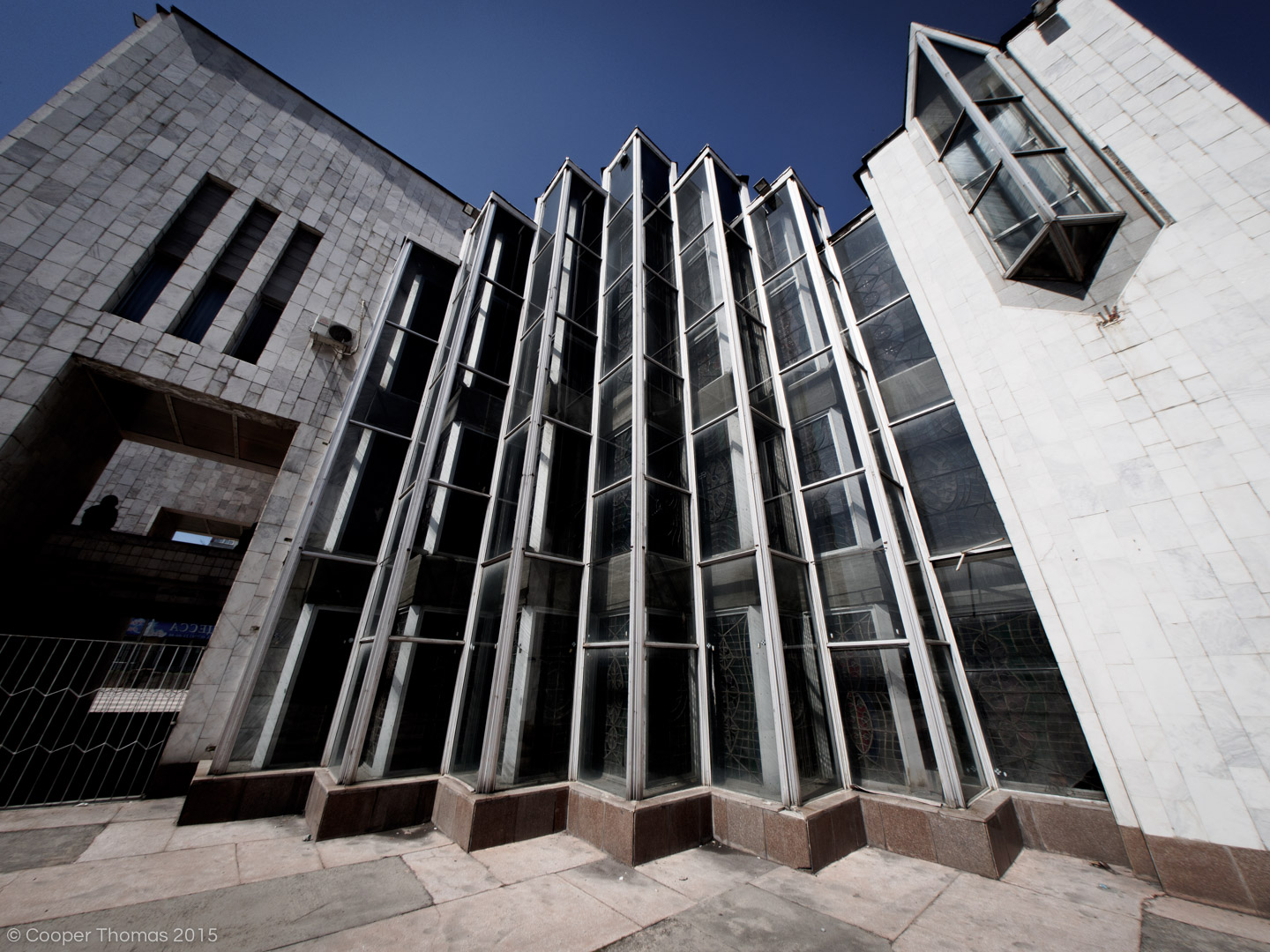 As with all monumental buildings of Soviet manufacture, there’s a logical reason for the Wedding Palace’s futuristic design. Under communist administration, all public expressions of religion were banned. Consequently, marriages were reduced to formal affairs carried out in the offices of local officials. This infuriated the Soviet Union’s myriad religious constituencies – Orthodox Christians, Roman Catholics, Baptists, Jews, Muslims, and Shamanists in the Far East – for it compromised the fundamental sanctity of marriage. These people believed that marriage was not just a legally binding agreement, but a holy union between individuals. And so, they clamored for the restoration of their right to wed in religious establishments. The communist authorities, determined to wean the population off organized religion, were unwilling to acquiese to these demands. They were, however, willing to compromise. And so emerged the wedding palace. 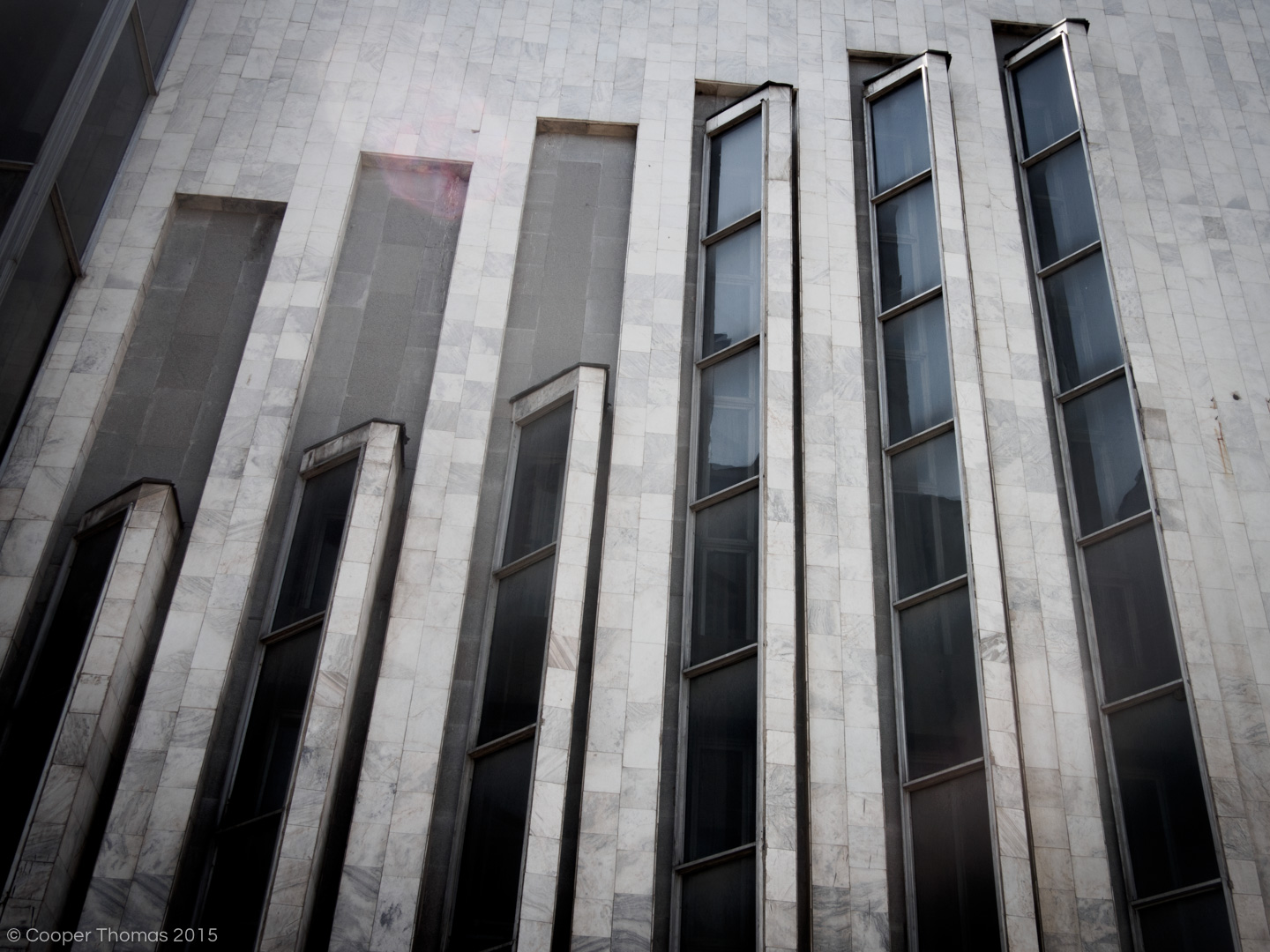 Conceived as a non-denominational house of worship wholly owned and operated by the state, the wedding palace was a novel concept: it mimicked the architectural grandeur of cathedrals, mosques, temples, and other sacred sites, and aimed to evoke the same feelings of reverence and spirituality as those buildings, but it contained no religious iconography whatsoever. Stained glass windows depicted glorified scenes of manual labor, and hammer-and-sickle bas reliefs replaced crucifixes. There was no pulpit or minbar from which to deliver a sermon. In this church, devotees worshipped one god only: Lenin. 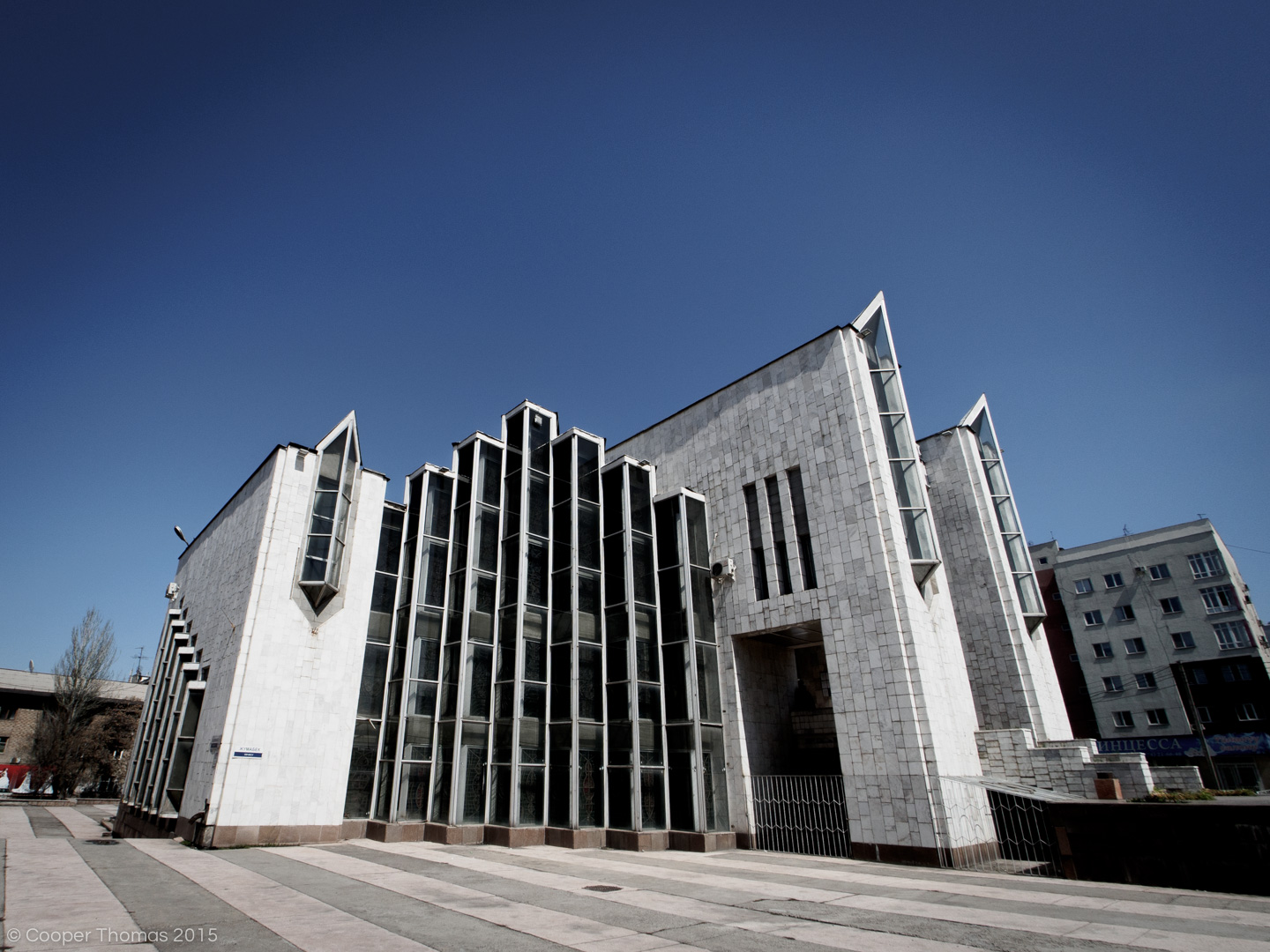 Inside the Bishkek Wedding Palace, vaulted ceilings and colorful stained glass windows help create a church-like atmosphere. In the center of the room, a dark red carpet leads up a flight of stairs and into a ceremonial chamber, where the marriage vows are taken. Only the bride and groom are allowed in here – I tried to tiptoe in to get a better look at an ornate chandelier, but an attendant shouted at me from across the hall. It’s a beautiful space, bright and peaceful. 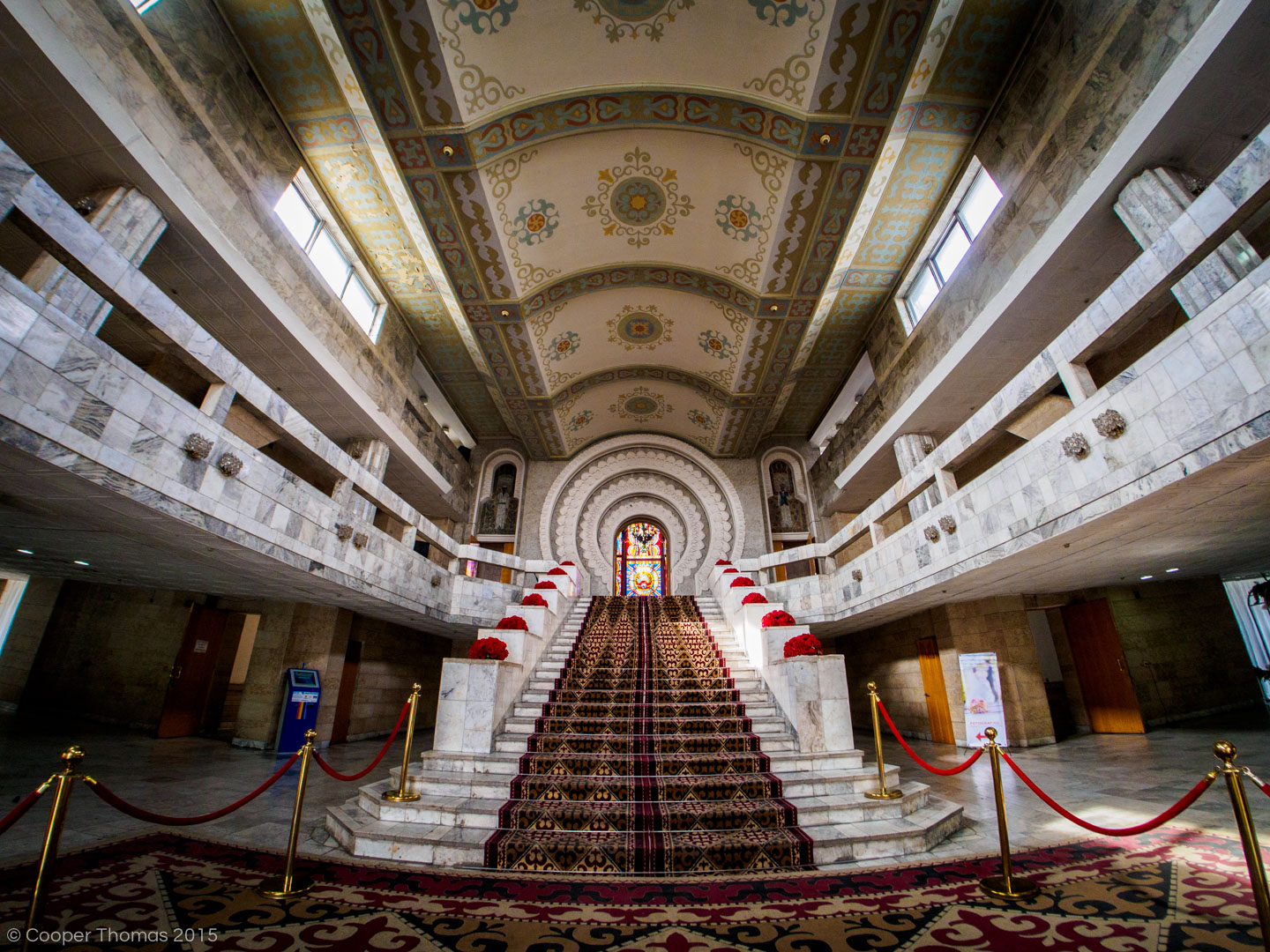 Given the upper middle class’s predilection for extravagant displays of wealth, the wedding industry has boomed in Bishkek. Across the street from the Wedding Palace, several flower vendors vie for customers. A large store sells elaborate silk wedding dresses and outrageously shiny silver tuxedos. On the corner, young girls peddle caged doves, which couples pay to release. (Sadly, the doves are trained to return to their cages.) Nearby, a limousine rental company allows moneyed couples to choose from a fleet of elongated Towncars, Suburbans and – for those who can afford the ultimate luxury – double-decker Hummers. 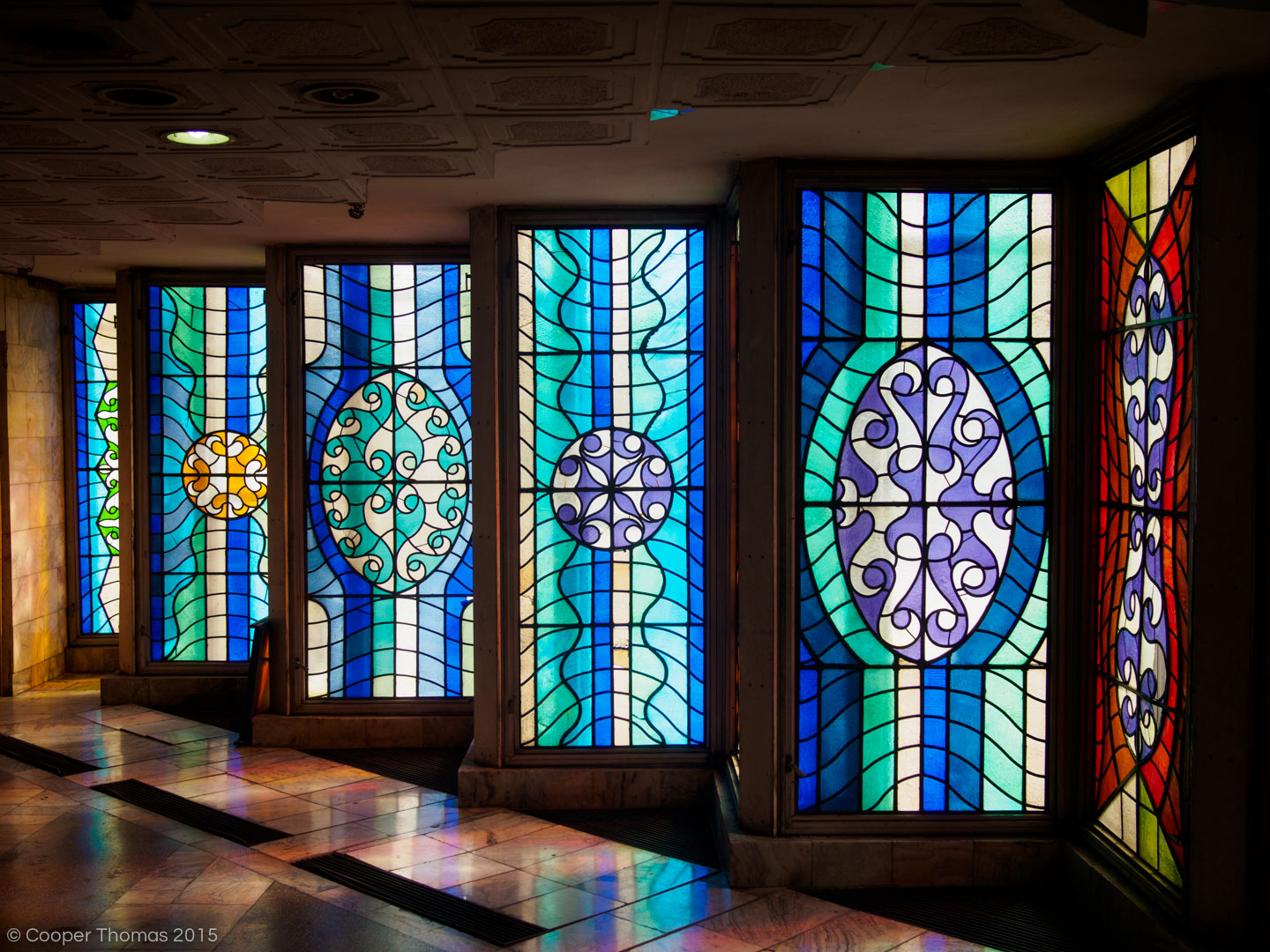 Despite the amount of money channeled into weddings these days – or perhaps because of it – the Wedding Palace itself has fallen on hard times. I suspect that somewhere along the line, funds earmarked for the building’s maintainance are diverted into a bemused official’s pocket. Several of the glass panels are shattered, the surrounding grass is overgrown and littered with empty two-liter beer bottles, and the fountain is filled with brackish brown water. Nevertheless, the building remains an impressive testament to functionalist Soviet design, and a Bishkek landmark. 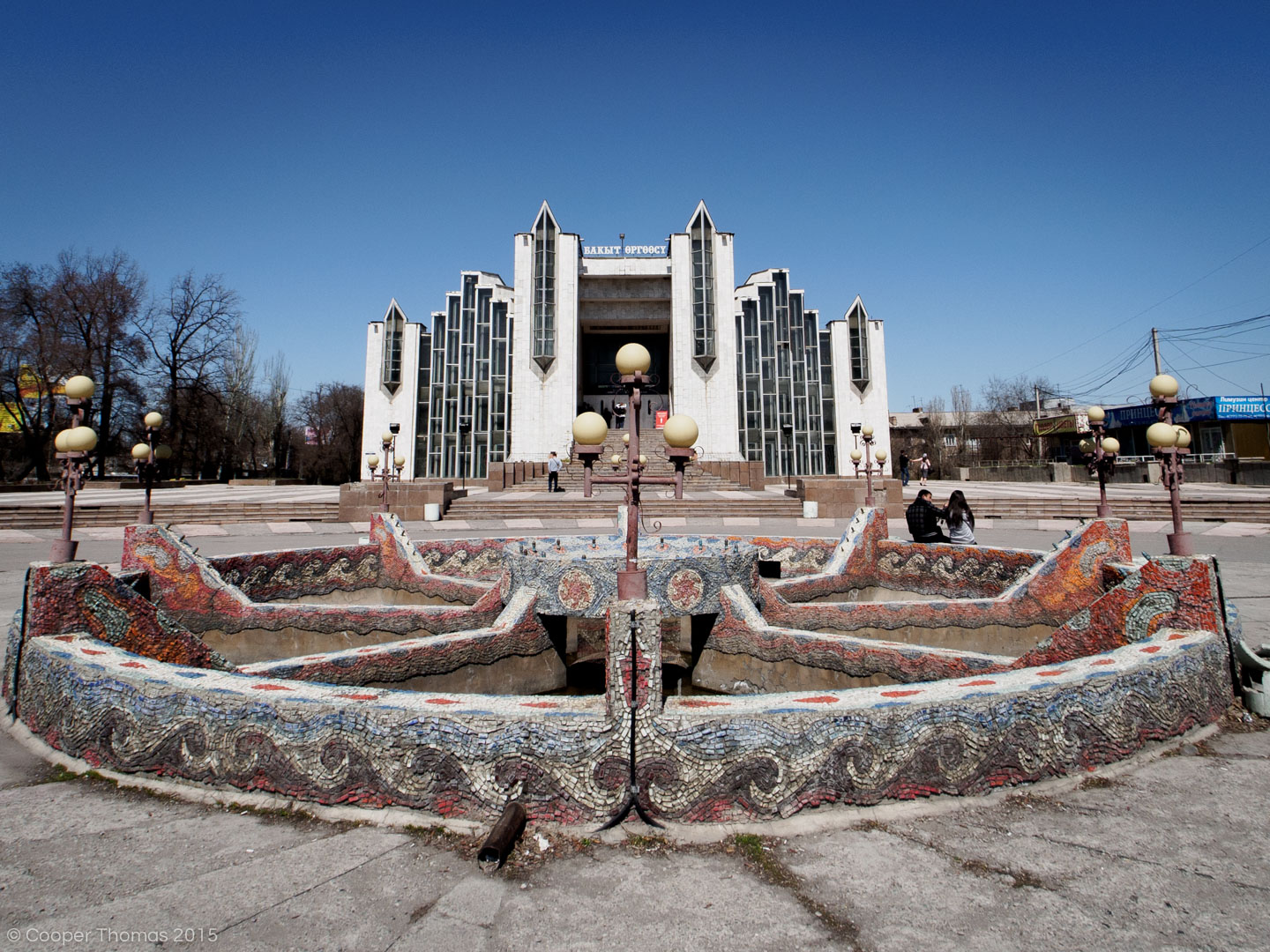