← For the Motherland: Victory Day in Bishkek Buildings That I Love, Part One: Bishkek Wedding Palace →

Welcome to the second installment of Buildings That I Love, an ongoing series in which I introduce some of my favorite buildings in Bishkek. You can read Part One, which examines the Bishkek Wedding Palace, right here. In this post, we’ll take a closer look at the abandoned library/restaurant/nightclub/casino near Victory Square.

Like most major cities in the former Soviet Union, Bishkek contains an impressive public square commemorating the Union’s glorious victories in battle. Though Victory Square is not located at the geographic center of the city, it is, in some ways, the symbolic heart of Bishkek. Here, under a three-sided monument representing the tunduk – the beautifully plaited ring that crowns yurts and features prominently on the Kyrgyz flag – a flame burns ’round the clock in honor of the Soviet Union’s fallen heroes. Newlyweds make pilgrimage to the Eternal Flame after tying the knot at the nearby Wedding Palace, as do many school groups. Given the significance of Victory Square, then, it is somewhat surprising to find a derelict, decaying building just across the street – especially one of such beauty as this. 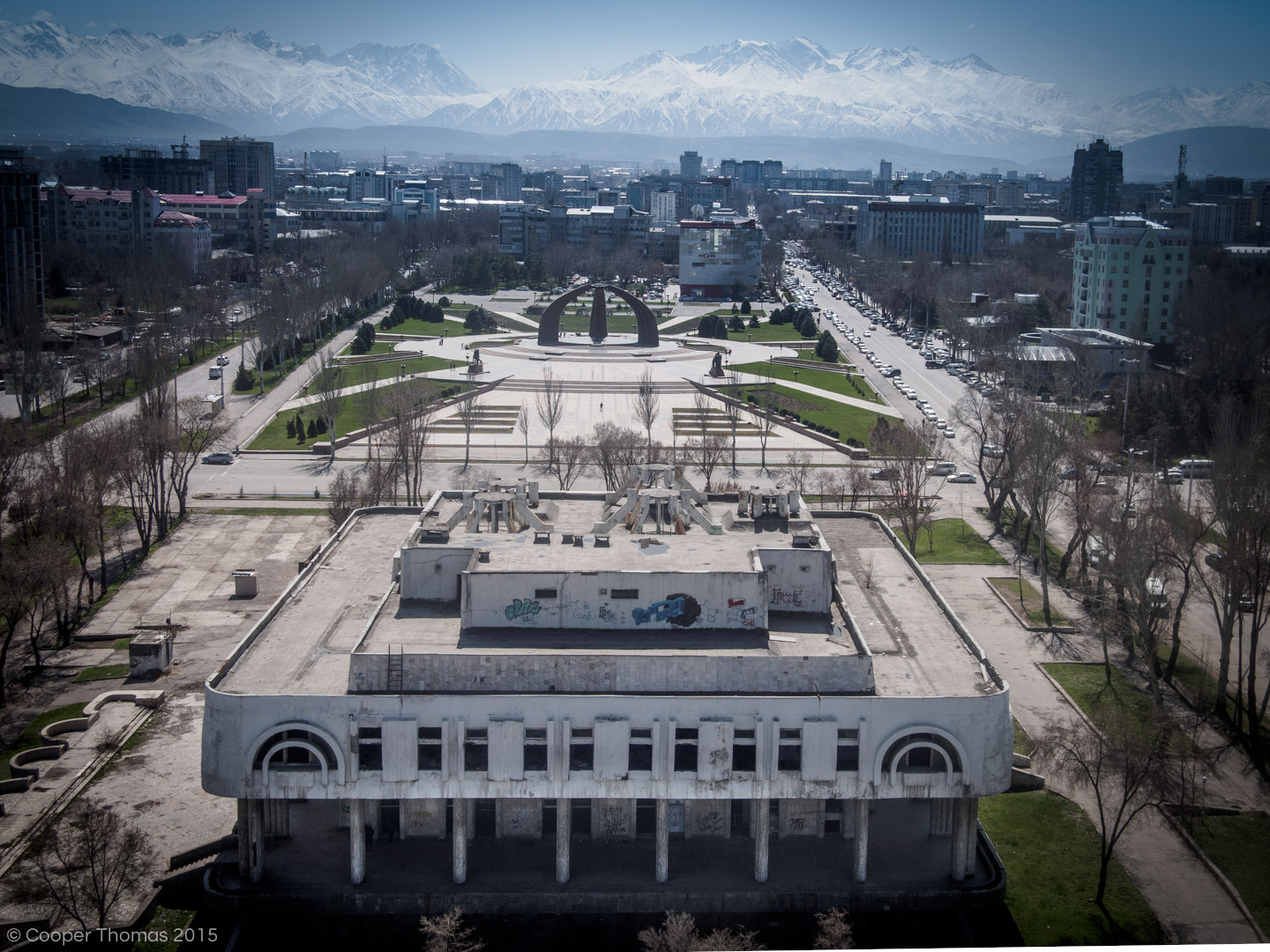 The history of this structure is somewhat difficult to trace, which is strange, given its size and (erstwhile) splendor. No one seems to know quite when it was constructed, or by whom, but based on its appearance I’d guess it’s a product of the late 1970s or early 1980s. According to the folks at the Vienna Architecture Center, the building originally functioned as a university library – a role befitting its refined design. Perched on an elevated platform, perfectly square but with rounded corners and arched windows, the building is at once inviting and imposing – a delicate balance that many Soviet Modernist buildings strive to achieve. Tall columns line the walkway that encircles (ensquares?) the structure. Though the faces of the building have been defaced and the windows shattered, one can imagine how it might’ve looked in its prime some twenty-odd years ago. 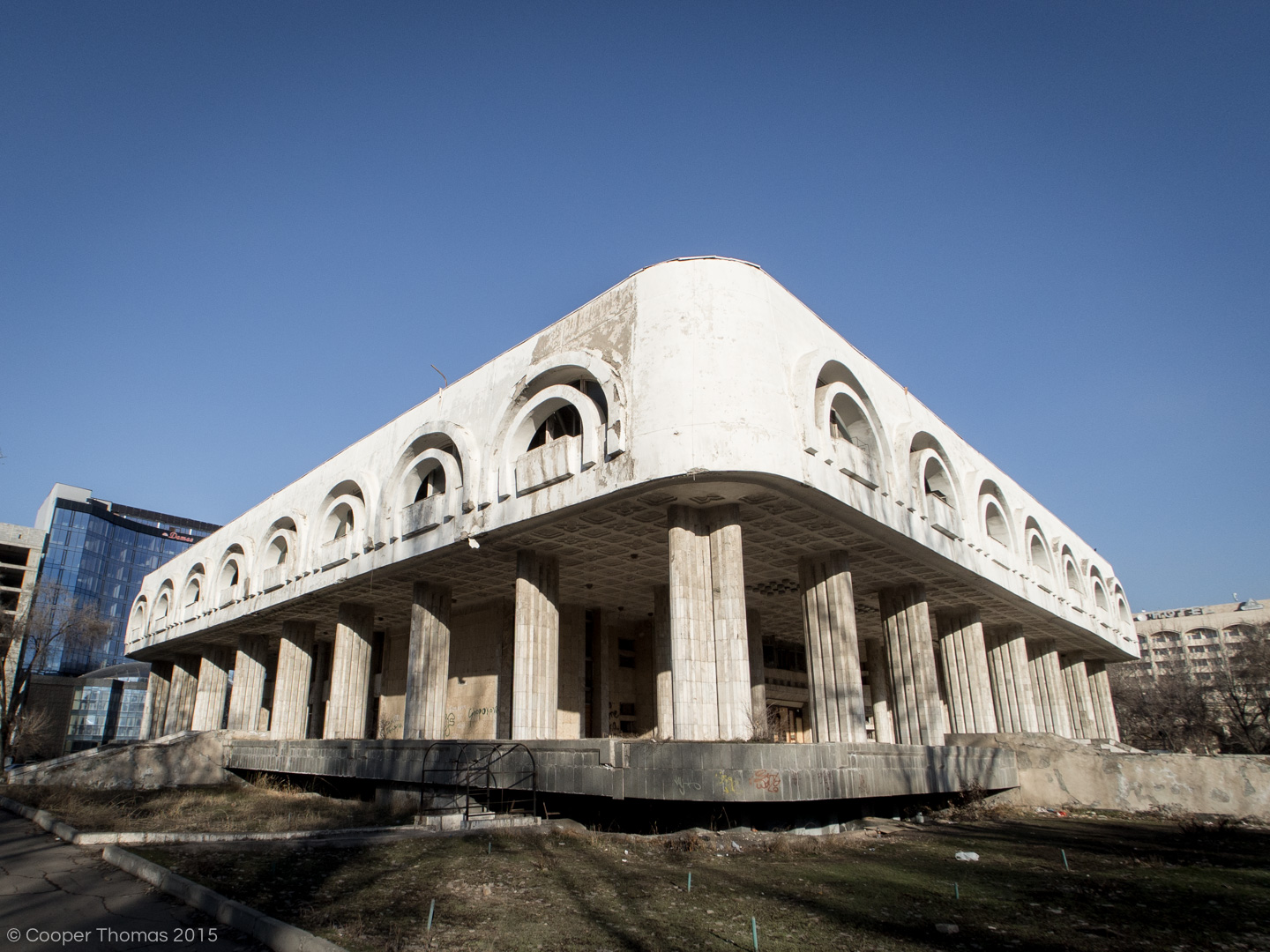 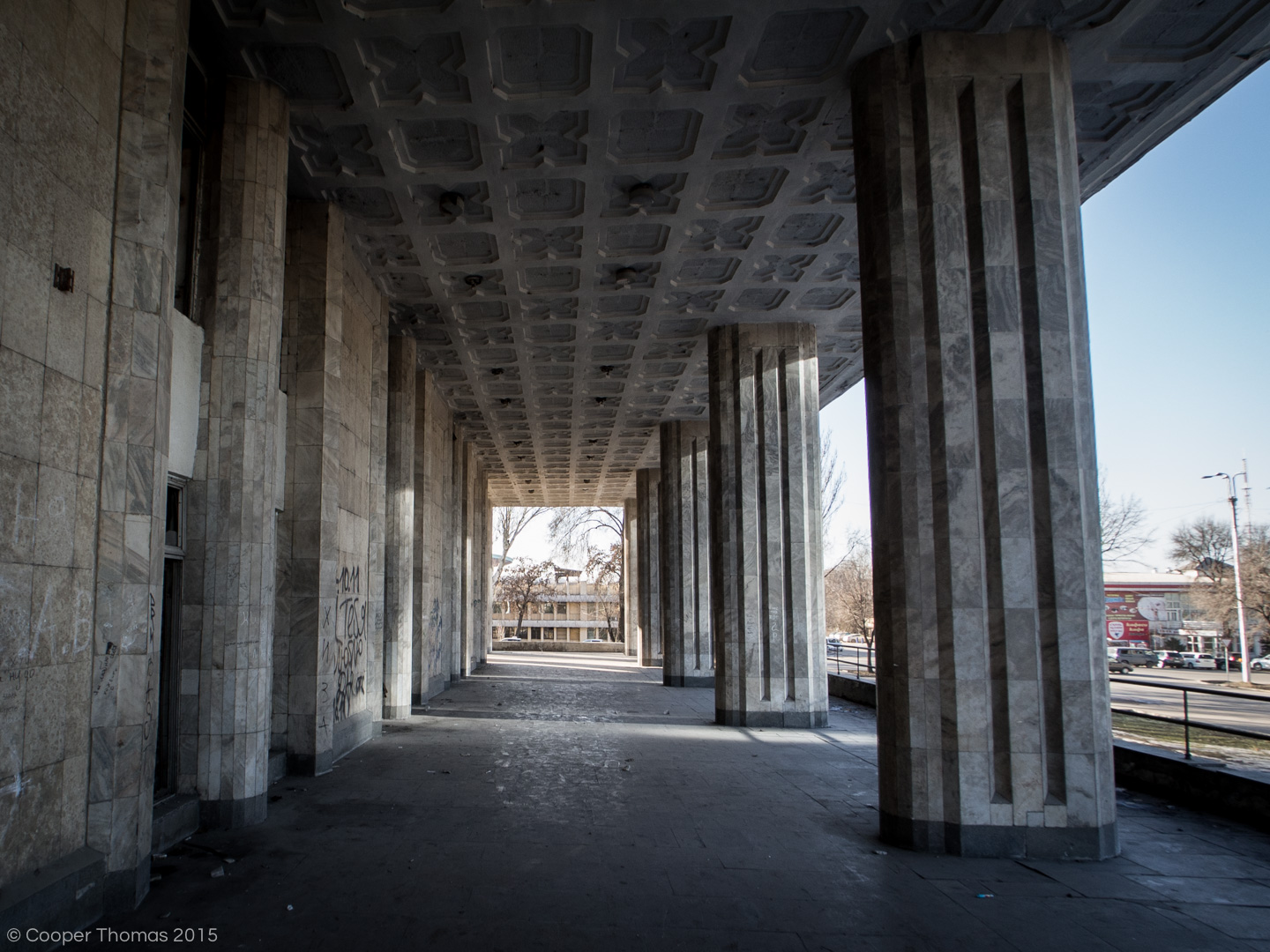 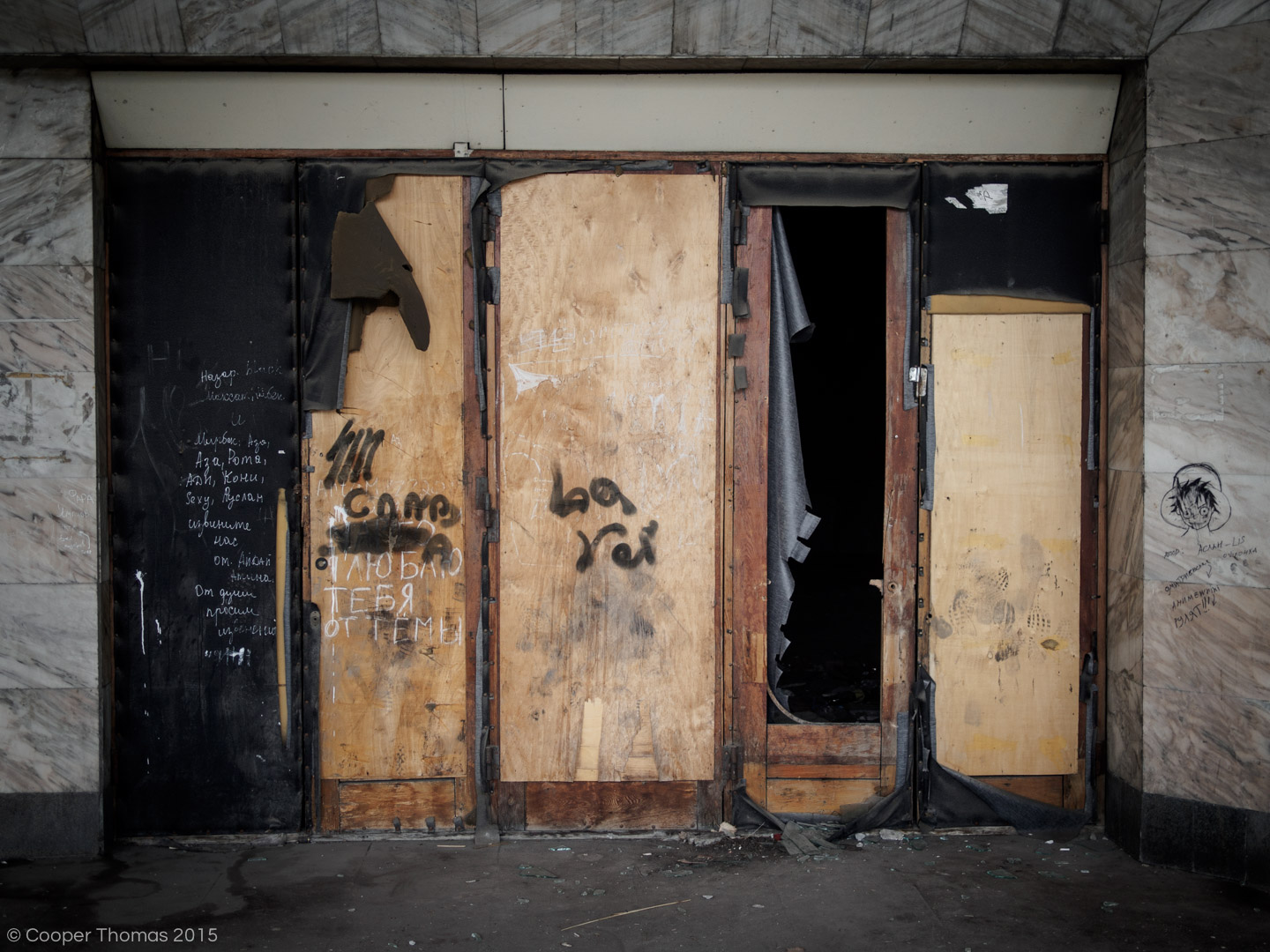 In the mid 1980s, ownership of the building transferred from the public university to a private company, and the building was converted into a restaurant. According to local news syndicate Kloop.kg (RU), Naryn Restaurant quickly became one of the most popular spots in town. But when corrupt Kyrgyz president Askar Akayev was deposed during the revolution of 2005, ownership of the building suddenly changed hands again. (It was later discovered that prior to the revolution, the building was owned by Aidar Akayev, the president’s son.) For the next few years, the building housed a nightclub and a casino, until in 2012, the government banned gambling, citing its detrimental effects on Kyrgyz society. The casino was shut down, and the building shuttered. It has been in a state of decay ever since. 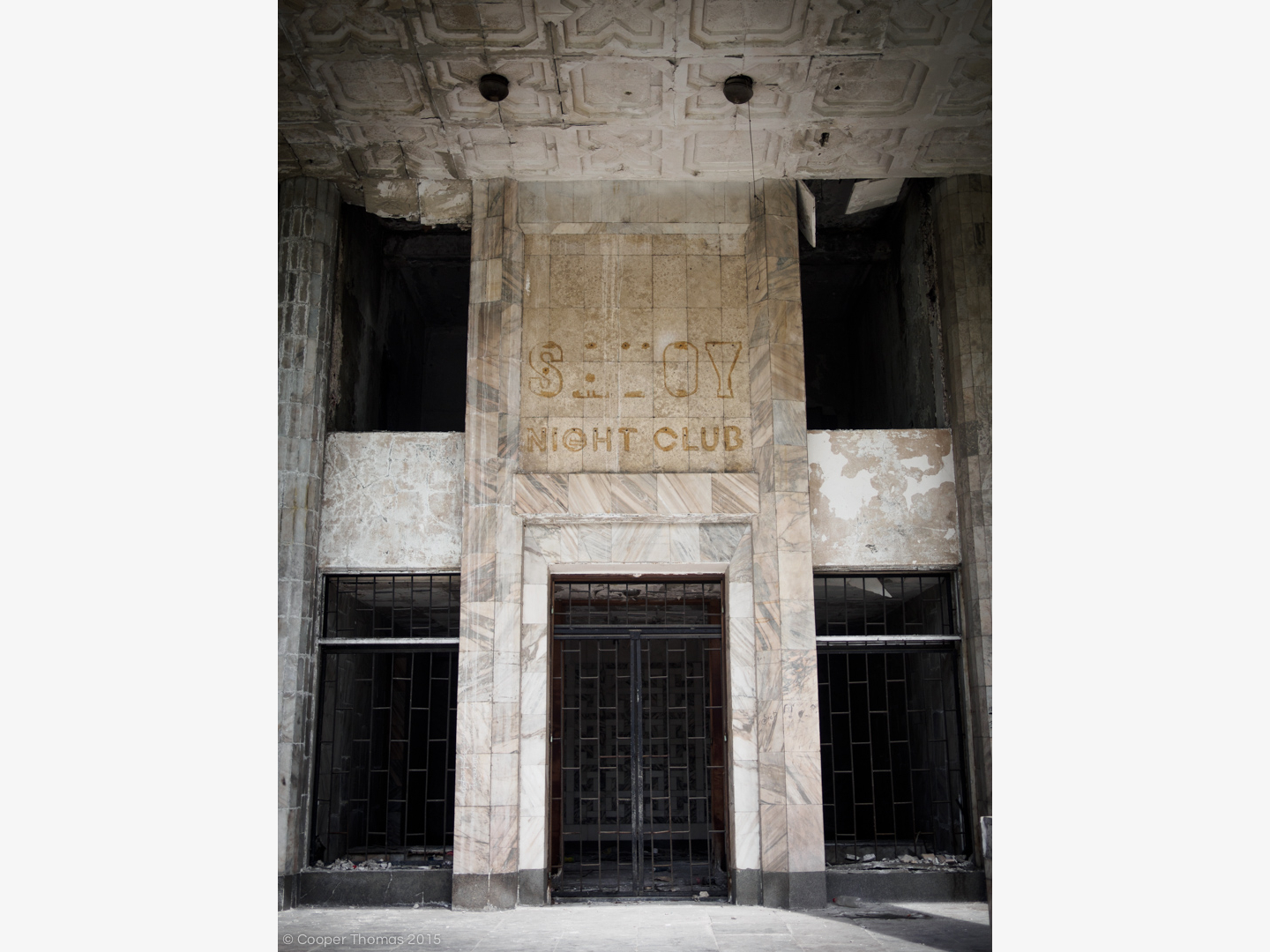 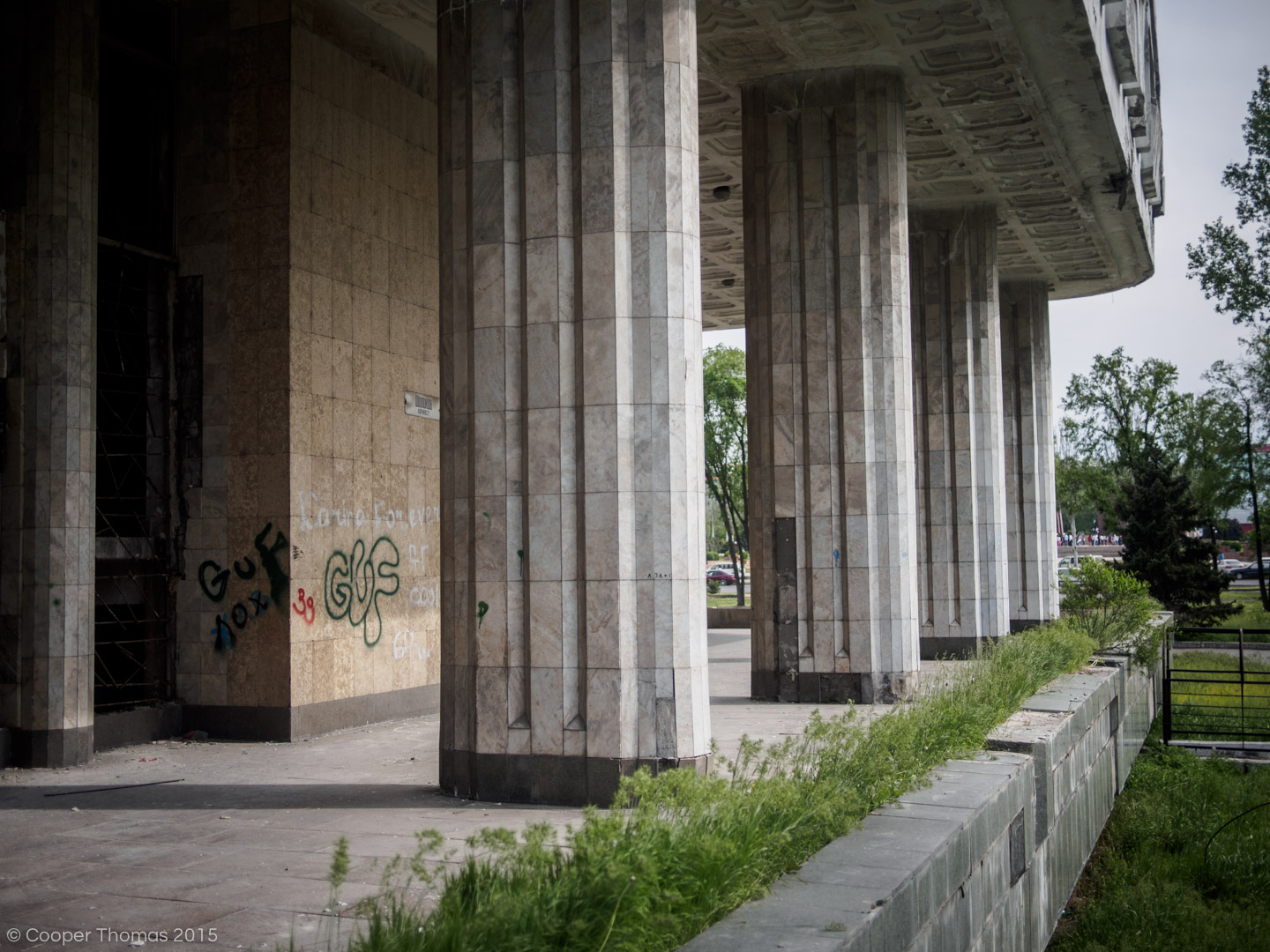 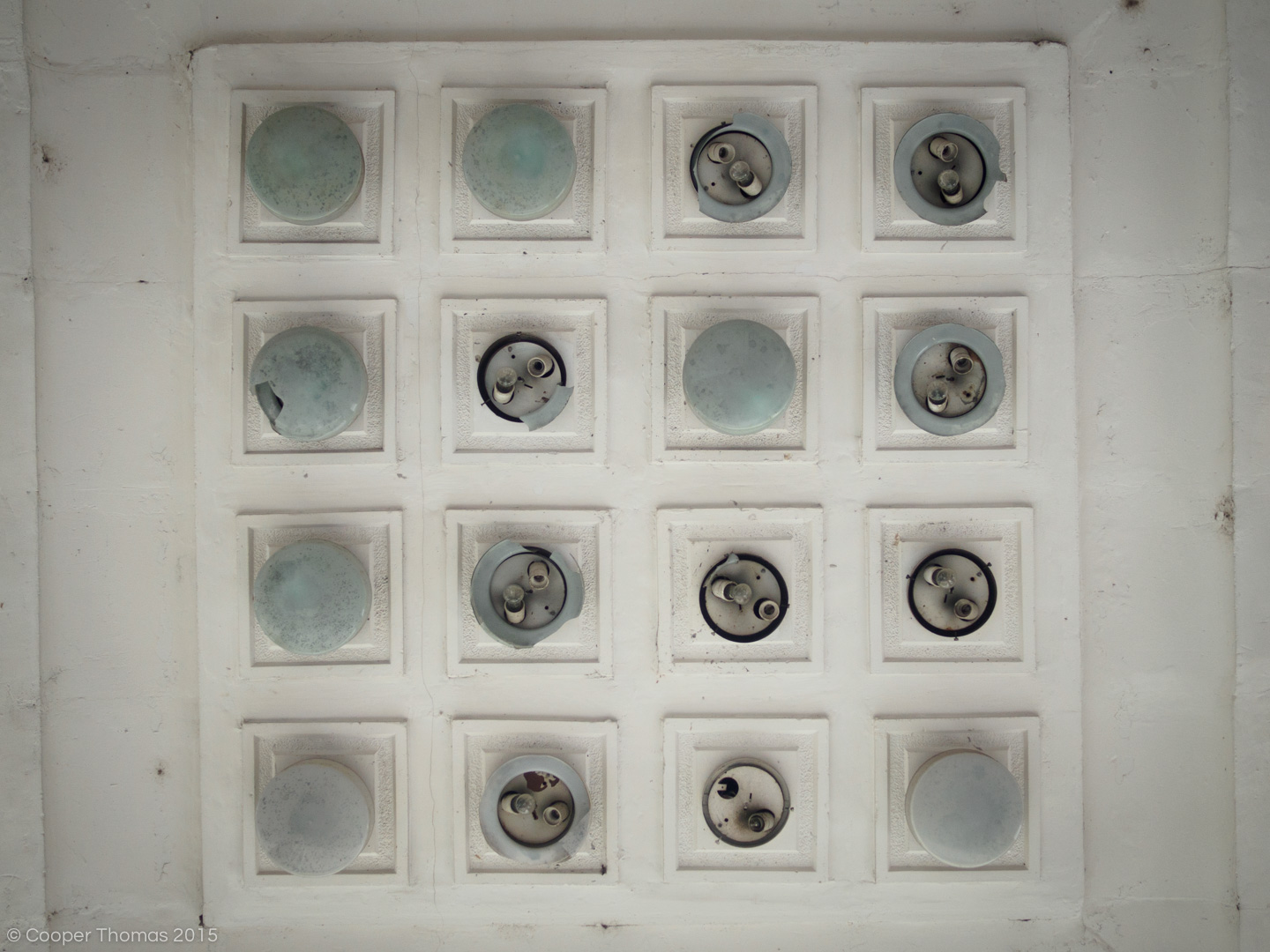 Today, the building is a haven for the homeless, and the interior, stripped bare of any valuable materials, is littered with garbage and personal effects. In 2013, officials discovered dangerously radioactive smoke detectors throughout the building. Why the building has not been renovated is a mystery to me. Perhaps the owner – whoever that may be – is waiting for real estate prices to rebound before selling the whole plot. (This isn’t terribly uncommon in Bishkek; the building that once housed the Prosector’s Office, which sits abreast Ala-Too Square, was burnt to a crisp during the violent 2010 riots. To this day, the plot hasn’t been re-developed, despite its central location.) 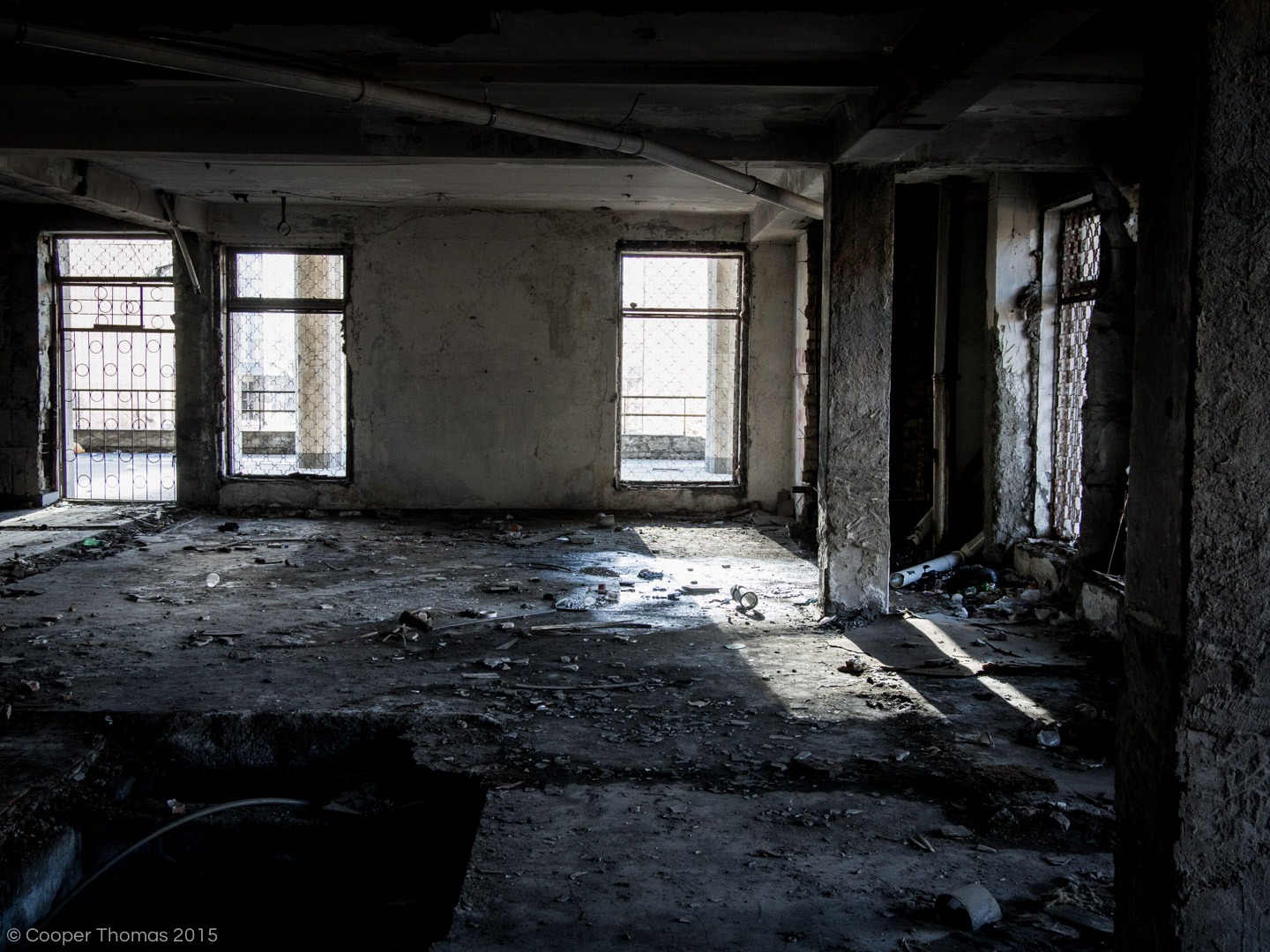 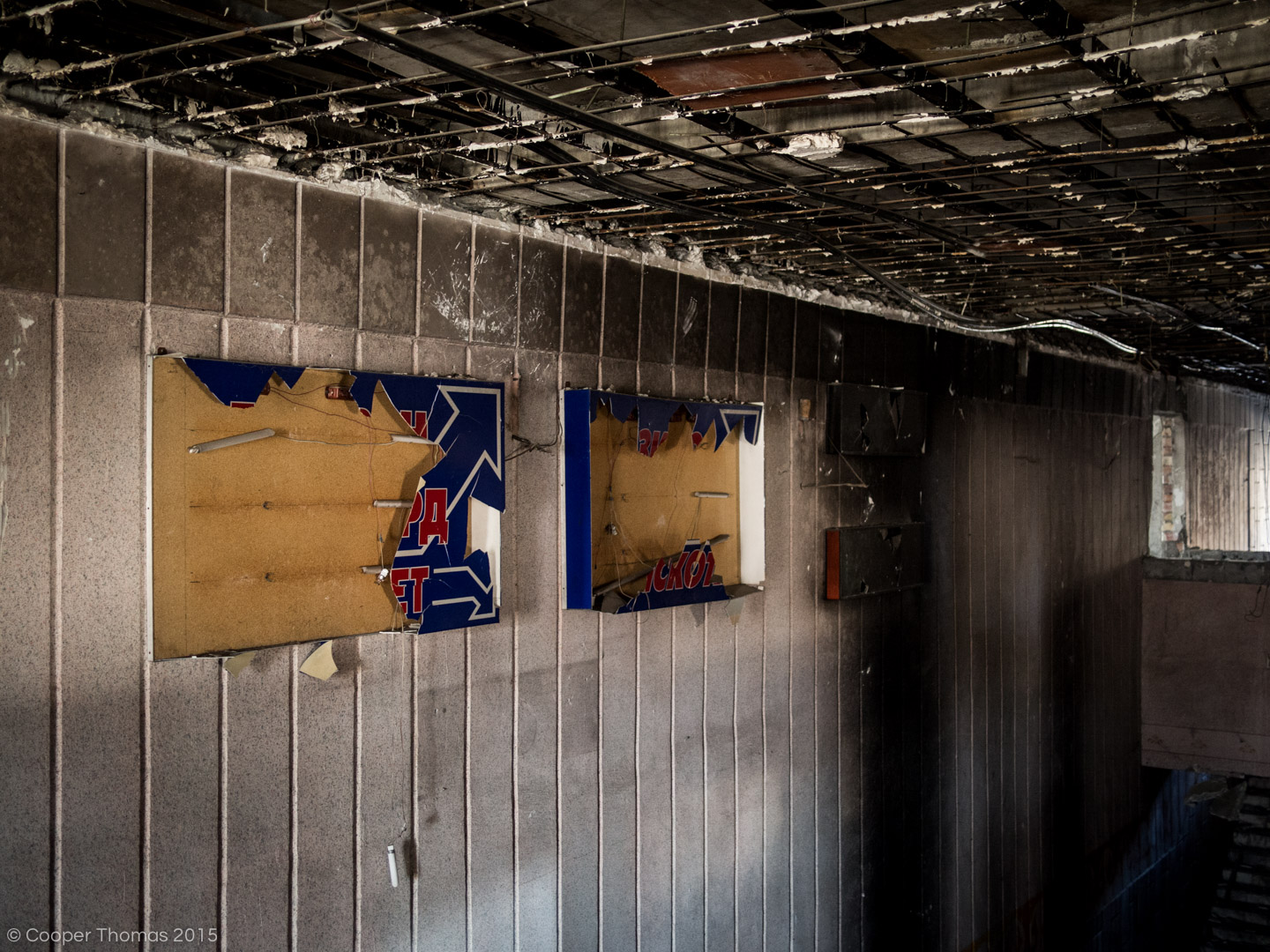 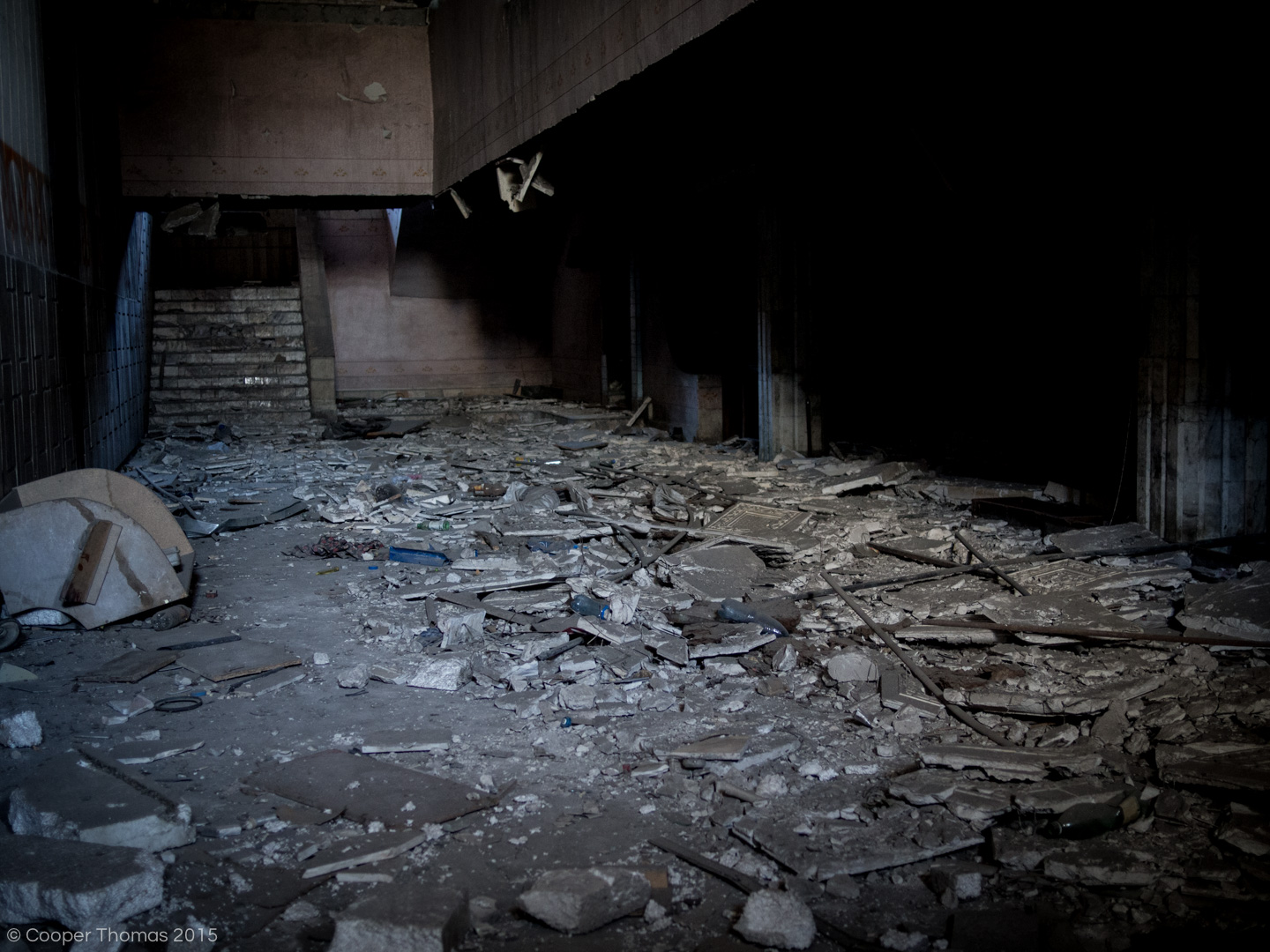 I’ve spoken to a number of Bishkek residents about the building, all of whom agree that it should be restored, not razed. Some have suggested converting the building into a museum, while others think it would make a fine lecture hall. One friend even proposed turning it into rollerskating rink, which I wholeheartly support. Unfortunately, however, it’s more likely that the building will be bulldozed eventually, and the plot redeveloped entirely. I’ve heard rumors that the owner of Cosmopark – a shopping mall housed in what is easily the ugliest building in Bishkek – has already purchased the lot. Funny how these things work out.