Back to Basics: the Soviet Rangefinder 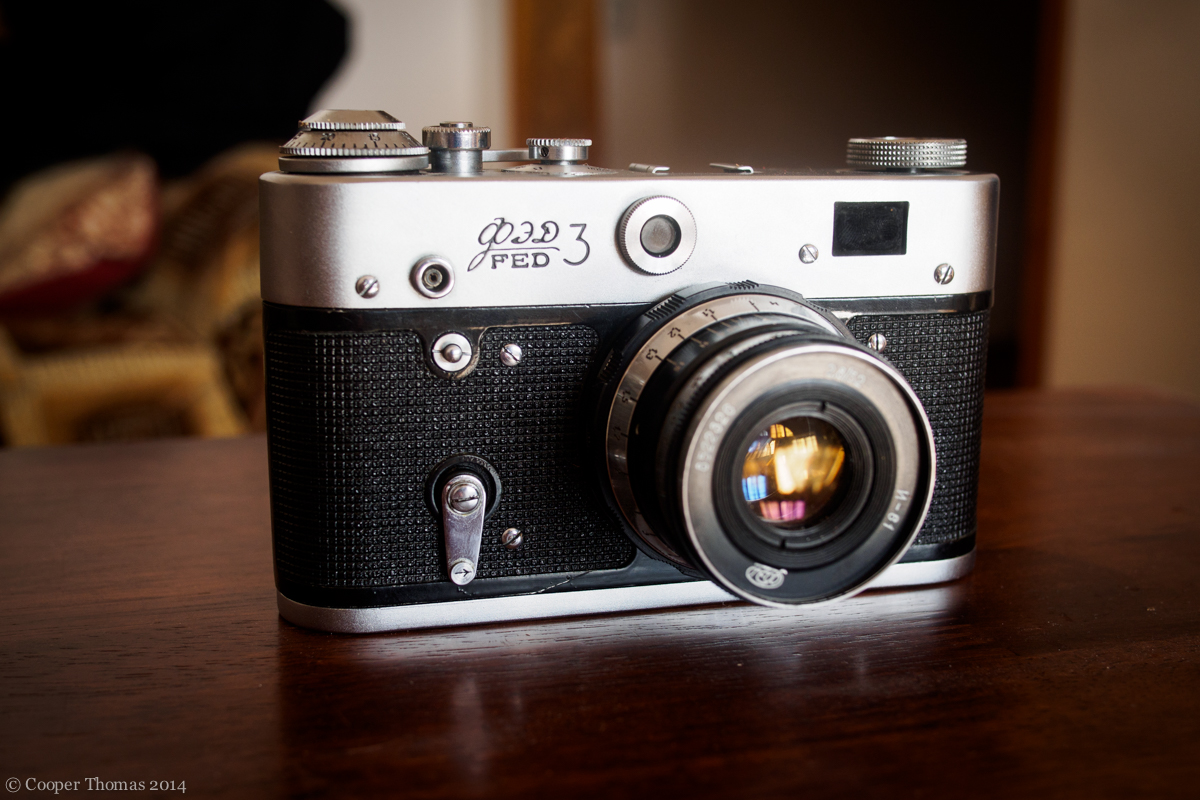 Earlier this week, I picked up my first Soviet film camera: a beautiful FED-3B (that’s ФЭД-3Б for the Cyrillicly inclined) 35mm rangefinder from the early 1960s. Curiously named after Felix Edmundovich Dzerzhinsky, the founder of the Soviet secret police, this camera is a crude replica of the famous (well, famously expensive) Leica III rangefinder. The first FED cameras were manufactured at a child labor commune in Kharkiv (now Ukraine), but mine was most likely assembled – by adults, mind you – at the KMZ factory in Krasnogorsk.

The lens is an Industar 61L (Индустар 61Л) 52mm f/2.8, also a replica of a WWII-era Carl Zeiss lens. (The Red Army captured the Zeiss factory during its march to Berlin, and not-so-subtly “borrowed” the Germans’ optical designs.) Soviet camera collectors swear by this lens, claiming that it’s every bit as sharp and bright as its better-known German relatives. Plus, the glass is coated with lanthanum, a mildly radioactive element that allegedly yields greater contrast. And maybe cancer. 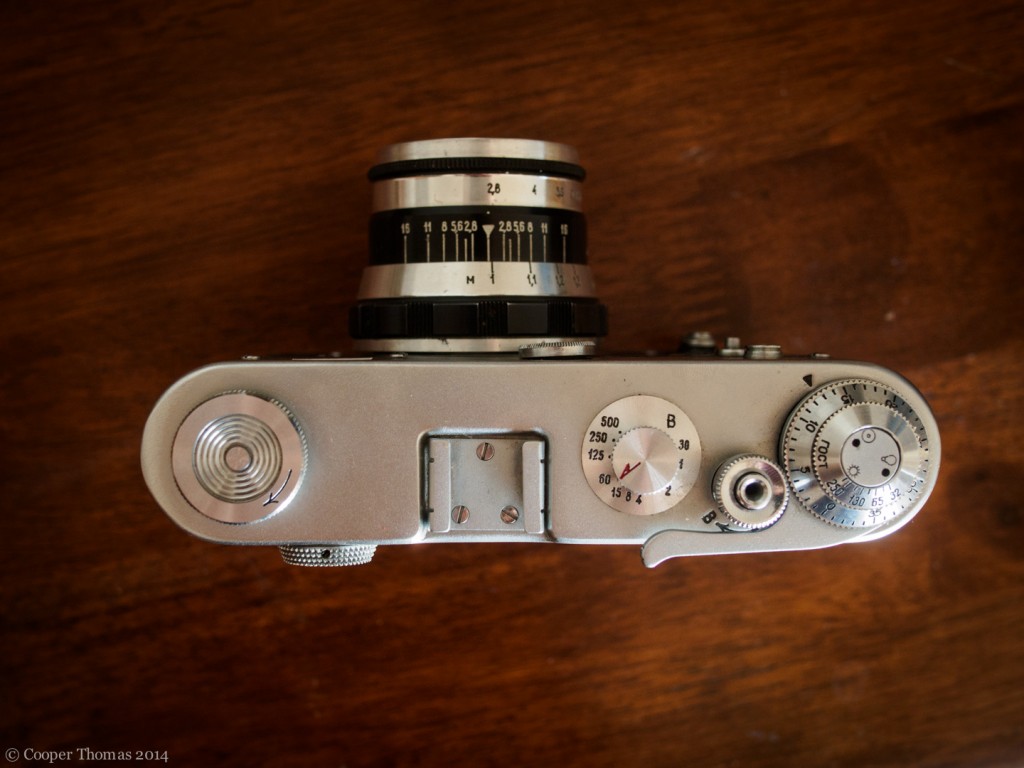 The camera predates integrated electronics, and it doesn’t have a built-in light meter, and so all operations are fully manual and mechanical – the user must set the aperture, shutter speed, and focus point by hand for each exposure. Here’s the full process:

1. Crank the film advance lever to cock the cloth shutter and wind a fresh patch of film into place.
2. Rotate the click-stop aperture ring to the desired position.
3. Select an appropriate shutter speed using the corresponding dial.
4. Compose the shot using the viewfinder.
5. Rotate the focus ring until the two corresponding images are superimposed in the viewfinder.
5. Gently depress the shutter release.
6. Repeat!

There’s something immensely satisfying about this highly tactile process; with each adjustment, one can literally feel and hear the gears whirring inside the camera. That the camera still operates after five decades of use testifies to its rugged construction. It truly is a mechanical marvel. 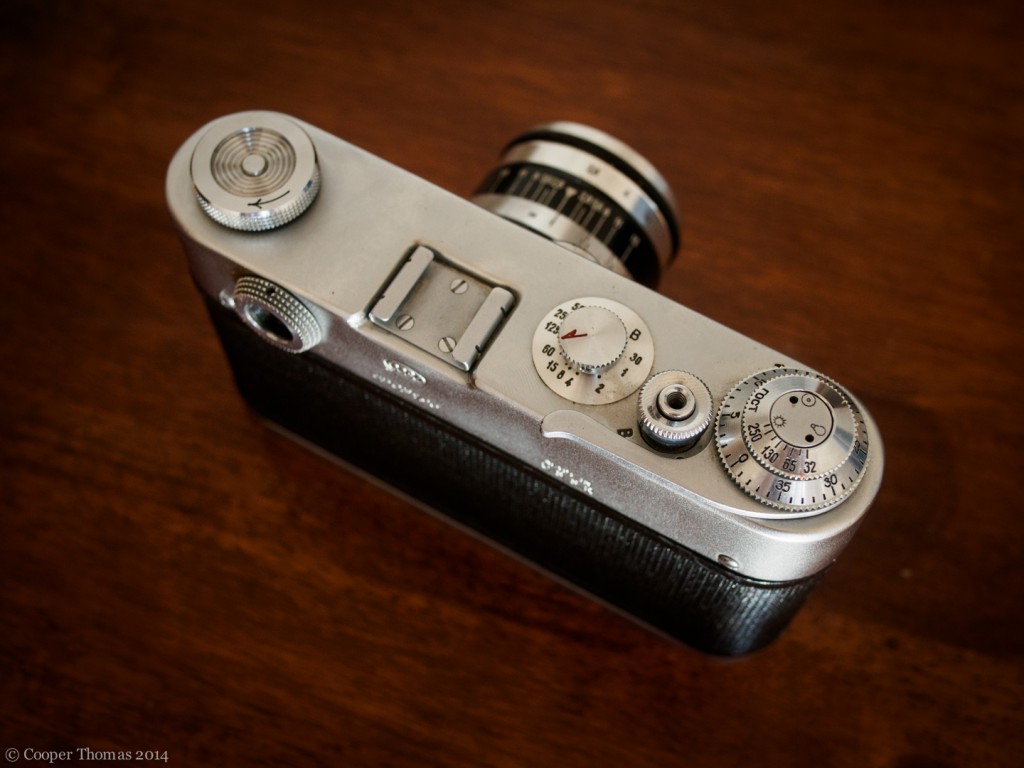 I bought the camera and lens for about $13 at a small antiques shop in downtown Bishkek. In case you were wondering, this is like 1/100th of the price of an equivalent Leica setup. I also picked up a couple rolls of crappy expired Fujifilm Superia 200 (at the “official” Kodak store – hah!). Unfortunately, this is the only film I’ve been able to find in Bishkek so far, but at $2.50/roll with free development (prints and scans), I can’t really complain.

I haven’t finished the first roll of film yet, and so I’m not actually sure if I’ve been metering properly (sunny-16? What about cloudy-16?), but I’ve certainly enjoyed shooting with this camera. And if it suddenly stops working, I can always use it as a fancy paperweight.